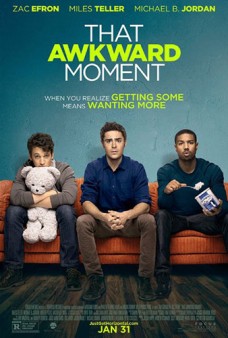 Zac Effron is back on the big screen in territory that he is familiar with – Rom Com minus the Com.

Effron plays Jason, a single guy who is best friends with Daniel (Miles Teller) and Mikey (Michael B. Jordan), having known each other for a long time. Mikey, who is a doctor, is breaking up with his wife, who happens to be sleeping around on him. So distraught is Mikey that they all make a pact to stay single, brothers in arms, side by side, simply not all at costs get into a relationship. No matter what. Of course, this is not what happens.

Daniel, firstly, happens to casually fall in love with one of their friends, Chelsea (Mackenzie Davis), who was the woman they used to wrangle other women for them. Jason has no problem at all attracting women. He is very goodlooking with a hot body (Effron is shirtless in many scenes, and there is a funny bit where he is lying face down on a toilet, planking, and totally naked – which is the only funny bit in the entire film). Jason is happy being single and is in a purely sexual relationship with a very attractive young woman, so of course he doesn’t need a girlfriend in his life. Within 30 minutes into this film, you can pretty much tell how it is going to end. The plot is that predictable.

One night, while hanging out at their usual bar, they meet Ellie (Imogen Poots), and before you can say this movie is stupid, Jason and Ellie wind up in the sack together. After the act, Jason notices that in her bedroom she’s got a wad of cash on her bedside, a racy book called The Story of O. She also has a few boxes of condoms visible on the bottom shelf of the nightstand (do you know any woman who keeps boxes of condoms next to her bed? It’s probably one to stay away from!). Jason automatically thinks that Ellie is a prostitute and he calls Mikey to ask for advice as to what to do. Mikey tells him to get out of there, so Jason does. 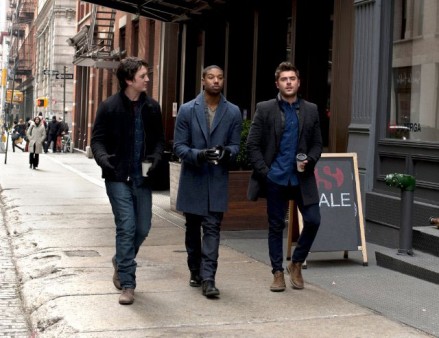 Daniel and Jason happen to work at the same company, a book publishing company. Their job is to illustrate the front covers of soon-to-be published books. Well the next day at work Daniel and Jason are meeting the author of a new book whose cover they are to illustrate, and guess who is the book’s author? Ellie. Jason doesn’t know what to do as he literally had left her apartment without telling her goodbye the previous night, so the meeting is a bit uncomfortable. Of course Jason and Ellie start seeing each other (purely just for sex the proclaim). Quickly into their ‘relationship’ Ellie has Jason over for dinner (with her parents) and we know at this point that the relationship is not just sexual. A short time later her father passes away and there are long scenes with Jason contemplating whether he should go to the funeral or not, for if he does it would appear that him and Ellie were a couple. And of course he doesn’t want to break the pact he made with his friends.

The story continues to be very predictable after this. Daniel falls in love with Chelsea, and you can see it from a mile away that Jason starts to fall for Ellie. That Awkward Moment is the typical rom-com Effron film. And of course the ending is as predictable as the look on Effron’s face he has throughout most of the film. Effron should stick to making musicals for the teenyboppers.