Beautiful Bones: Sakurako’s Investigation is a 2015 anime adaptation of what is up to this point a nine-volume continuing series of Japanese mystery novels by Ōta Shiori. This anime series was directed by Katō Makoto who has storyboarded for Btoom! and been assistant director on Re:CREATORS.

I found the premise of this series to be oddly similar to the American TV crime procedural Bones, wherein a preternaturally gifted (an not unattractive) forensic anthropologist helps the FBI solve murders using the bones of murder victims. In Beautiful Bones: Sakurako’s Investigation, we get the beautiful, but highly eccentric Kujō Sakurako, a woman in her mid-twenties who is obsessed with the study of bones. She doesn’t much get long with people, but she does like hanging out with her new assistant, the high school boy Tatewaki Shōtarō. And when the two of them are out and about, they have an uncanny ability for stumbling across dead bodies and the skeletons of dead humans.

The series follows their efforts helping the local police in the city of Asahikawa in Hokkaido on several murder investigations, and helping to uncover the mysteries of friends, such as Shōtarō’s schoolmate Kōgami Yuriko, who, by sheer coincidence, becomes tangled up in the pairs investigations and eventually asks Sakurako for help determining which of her late grandmother’s paintings she wanted to leave to her as a present before she died

The series doesn’t quite have a strong through line from start to finish, having mostly self-contained mysteries that stretch two or three episodes each, the best one being a mystery involving a supposedly cursed dog whose owners all die. There is a subplot about Sakurako’s younger brother that helps to explain why she feels drawn to Shōtarō, but I won’t spoil that for anyone here.

In all, this is a decent series, but nothing that could be classified as groundbreaking or edgy. It deals in the macabre, and many may like that and the obvious allusions to Sherlock Holmes and Watson. Again, I would note, these things are not original in anyway, especially given we currently have at least two running Sherlock Homes live-action series on Television (Sherlock & Elementary) and the aforementioned Bones, though not a direct Holmes descendant, is quite similar in pattern and plot to this series.

The animation is good with no major flaws or inconsistencies, but also nothing that really jumps out as particularly eye-catching or innovative. The character designs are solidly done, especially Sakurako who is certainly drawn as the typical traditional beautiful Japanese woman and drawn well. If you’re looking for a decent mystery/thriller and a little change of pace, this one would do nicely. 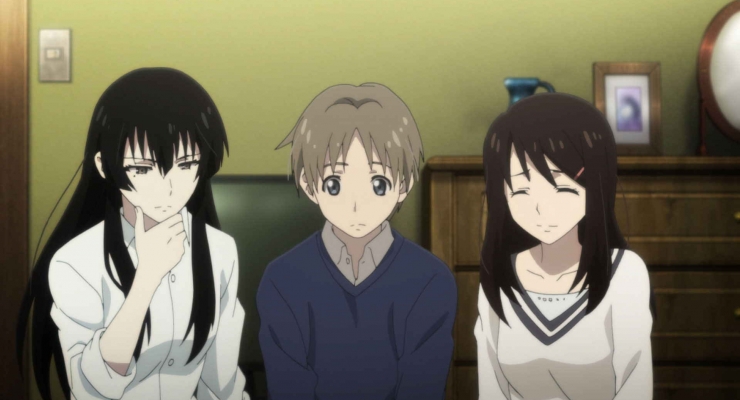 Apart from what seems to be the ubiquitous hints of banding in most anime releases on Blu-ray, the digital animation for Beautiful Bones looks strong with no major flaws like stairstepping, compression errors or oversaturation. It arrives on Blu-ray in an AVC 1080p encodement from Sentai Filmworks.

Beautiful Bones: Sakurako’s Investigation comes with the original Japanese-language voice mix in DTS-HD Master Audio 2.0 stereo. It’s a solid mix with good stereo effects and dynamic range for the material, which is basically dialogue-driven. The dialogue is clear and the cast put in solid voice performances.

Clean opening and closing animation & Sentai Filmworks trailers are all that are included with this collection.

A solid mystery /thriller series that despite its TV-MA (V) rating from Sentai Filmworks is neither too gruesome nor excessively violent. The story is a bit unoriginal, fitting into the usual crime procedural genre that only have hints of the fantastical due to being in the animated realm.