The story is a musical fairy tale based on the old fairy tale of the beauty and the beast, most likely from the first-ever published version by Jeanne-Marie Le Prince de Beaumont from the 18th century. At the center is a cursed prince who has been turned into a hideous beast by an enchantress who comes to his house one night in the middle of a storm. Under the guise of an ugly old woman, the enchantress begs the prince for shelter, but he turns her away and she turns him into a beast as payback, leaving him with a single rose. He must now find a woman to love and love him back before the rose loses its last petal on his 21st birthday or he will remain a beast forever.

Beauty and the Beast is a lavish musical filled with memorable songs and a big heart. This is classic Disney through and through. One can draw a line from Snow White through Sleeping Beauty all the way to Beauty and the Beast and see the Disney legacy on display. The film also has the distinction of being the first of Disney’s hand-drawn animated films to use CGI for the backgrounds in the famous ballroom dance scene. 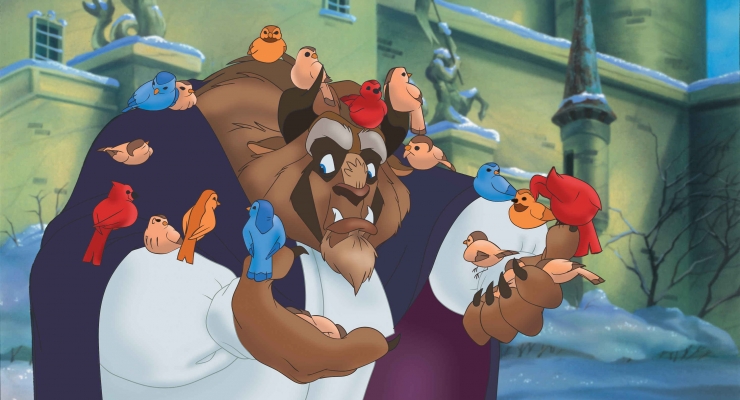 This is not a new restoration of Beauty and the Beast from Disney for its 25th Anniversary release. In fact, this particular restoration has been released a couple of times in Disney’s Diamond Edition and Diamond Edition 3D sets. It’s a beautiful restoration and transfer in AVC 1080p that is clean yet detailed and absolutely sparkles on Blu-ray. The colors pop off the screen and the ‘90s era hand drawn animation looks fantastic.

We also get the same, marvelous English DTS-HD Master Audio 7.1 audio mix for Beauty and the Beast that has previously appeared on Blu-ray. While an upgrade to Atmos or DTS:X may have been lovely to hear, this mix is no less engaging and still remains a reference. There is a good balance of ambience in the surrounds and discrete sound effects panned throughout the room. Dynamic range is wide, but not excessive and low-frequency extension is good, providing a hefty, but not booming bottom to the sound. High frequencies are smooth and relaxed while dialogue and vocals are clean and balanced perfectly into the mix.

The supplements have been scaled back for the 25th Anniversary release, but we get some new HD extras and all three versions of the film, just as on previous releases.

After 25 years this animated behemoth is still dazzling fans of Disney and animation enthusiasts. Although this 25th Anniversary edition is more of a repacking with a couple of new extras (and many older ones excised), it is still worth getting for those few who still don’t own it.