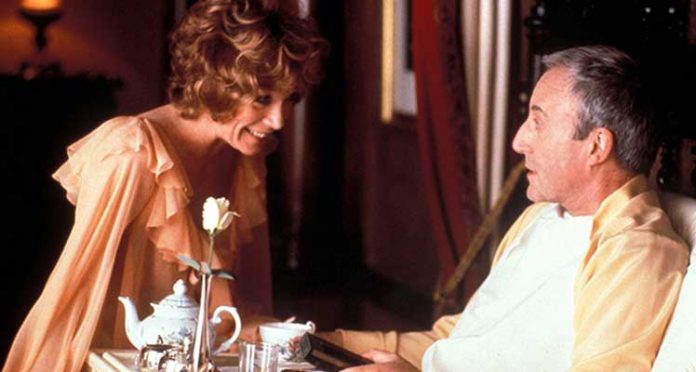 One of Peter Sellers’ last films, the 1979 Hal Hashby directed comedic fable Being There effectively lampoons the television age and politics by casing Sellers in the role as a simple-minded, fish out of water raised in the cloistered mansion of a millionaire benefactor on no education but television and tending to his garden. Sellers’ character, Chance, is then thrust into the real world of Washington, D.C. when the ‘old man’ dies and Chance is forced to find his own way.

His wide-eyed wonder at the world he has never experienced but through the screen of a television leads to him getting struck by a car owned by the wealthy Eve Rand (Shirley MacLaine). Coughing on a drink of spirits he, again, has never experienced in his sheltered life, Chance tells Eve his name is Chance…the…Gardener, which she mishears as Chauncey Gardiner. She takes him back to her mansion where her elderly husband, D.C. power broker Benjamin (Melvyn Douglas) is being cared for by a medical staff as he awaits a slow death from illness. Chance, meanwhile, becomes a rising star amongst the D.C. elite, his slow, steady manner of speech, mostly about tending to his garden back home, leading everyone to believe he is dropping deep pearls of wisdom. No one seems to realize that Chance, now known to everyone as Chauncey, has no clue what he is doing or what they even mean when they ask him deep, profound questions about the economy or simple things like what newspapers does he read.

Sellers puts in a perfect performance as Chance, giving an almost absent gaze yet childlike wonder at the actions taking place around him. One of the funniest turns is when Eve, now fully enthralled by ‘Chauncey’ and with the all-clear given by her dying husband, goes to Chance’s room for a sexual rendezvous. Chance, knowing nothing beyond what he sees on television, seduces her by merely mimicking what he sees a romantic couple doing on TV, and she completely falls for it.

Being There is one of the strongest indictments of the vacuous nature of the TV culture, the lack of reading in society, and celebrity. Alongside films like the creepier Videodrome it stands as a mirror on our sometimes ludicrous, sometimes heartbreaking world. Jerzy Kosinsky adapted the story from his novel of the same name and Melvyn Douglas won a Best Supporting Oscar for his role. 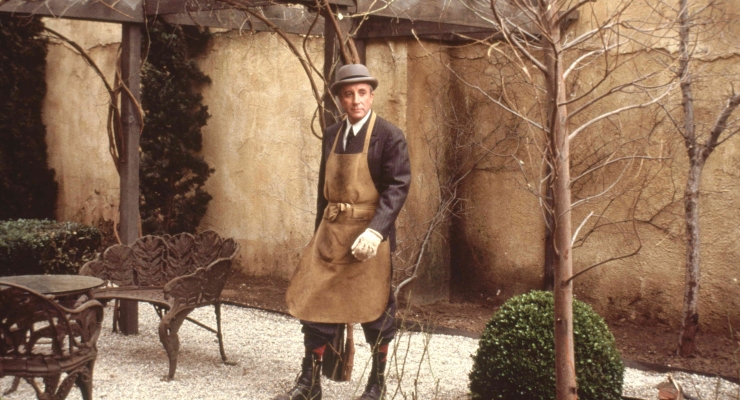 A new 4K restoration of Being There was undertaken for this Criterion Collection release. It was created in 4K on a Laserdisc Director film scanner from the original 35mm camera negative at Motion Picture Imaging in Burbank, California, and color graded under the supervision of cinematographer Caleb Deschanel. Dirt, debris, scratches, splices, and warps were manually removed MTI Film’s DRS, while Digital Vision’s Phoenix was used for jitter, flicker, small dirt, grain, and noise management. The film is presented in its original 1.85:1 aspect ratio in an AVC 1080p encodement on Blu-ray that is crisp, film-like, and shows a great amount of depth of field and natural color reproduction while maintaining the grain structure consistently throughout. This is a top-notch restoration.

The monaural soundtrack was remastered from the original 35mm magnetic track. Clicks, thumps, hiss, hum, and crackle were manually removed using Pro Tolls HD and iZotope RX. The soundtrack is provided on this Blu-ray from Criterion Collection in LPCM 1.0 and while it is just slightly boxy, it is clear with intelligible dialogue and very little noise.

As usual, Criterion loads this release up with an abundance of extras you won’t want to miss. There are numerous interviews and archival talk show appearances as well as deleted scenes and a very informative ‘making of’ and essay.

The Criterion Collection have done a bang-up job bringing this 1979 film to Blu-ray in this new 4K restoration. While it looks clean and crisp, it also looks film-like and organic. This 1970s fable is one that should be in very cineaste’s collection.