Twenty five years after its original theatrical release, Blade Runner: The Final Cut was re-released and it reflected director Ridley Scott’s ultimate thoughts about his futuristic neo-noir masterpiece that added a complete version of the “unicorn dream,” and violence and alternate edits from the international cut. Based on sci-fi author Philip K. Dick’s 1968 novel, Do Androids Dream of Electric Sheep?, Hampton Fancher and David Peoples crafted a compelling adaptation that still resonates with audiences, thirty-five years later, and now receives a 4K UHD restoration.

2019 Los Angeles is a dystopian megatropolis drenched in acid rain. Rick Deckard (Harrison Ford) is a former “blade runner” who “retired,” i.e., executed, rogue replicants. These sophisticated androids are manufactured in Dr. Eldon Tyrell’s (Joe Turkel) huge corporation and endowed with superior strength, human-like intelligence but only a four-year life span. Although Deckard is no longer officially a policeman, officer Gaff (Edward James Olmos) takes him to his former boss Bryant (M. Emmet Walsh) who convinces him to retire four Nexus 6 model replicants that have illegally returned to Earth from Off World. The replicants in question are ammunition-loader Leon Kowalski (Brion James), combat-model Roy Batty (Rutger Hauer), trained killer Zhora Salome (Joanna Cassidy), and pleasure model Pris Stratton (Daryl Hannah). Since these creations appear to be human, the only way to reveal their true identity is by gauging their emotional responses to specially designed Voight-Kampff test questions.

Deckard visits the Tyrell Corporation and administers the V-K test to Tyrell’s attractive assistant Rachael (Sean Young). It takes Deckard a long time to expose her as a replicant, as Tyrell explains that Rachael is unaware that she is not human. Gaff and Deckard search Kowalski’s apartment and find snake scales in his bathtub that will eventually lead them to the replicants’ whereabouts, and kick-start the mission to eliminate them. This film ultimately raises fundamental questions about what makes us human and, as will be revealed by android genetic designer J.F. Sebastian (William Sanderson), the boundaries between humans and their artificial counterparts turn out to be quite narrow. As the relationship between Deckard and Rachael simmers, his knowledge that her lifespan is limited clouds their possible future together. Perhaps the symbolic unicorn leaves open the hope that anything is possible.

For sci-fi films, Blade Runner was exceptionally well cast, strongly directed, and used camera techniques that for the times were quite innovative and produced visually stunning imagery. 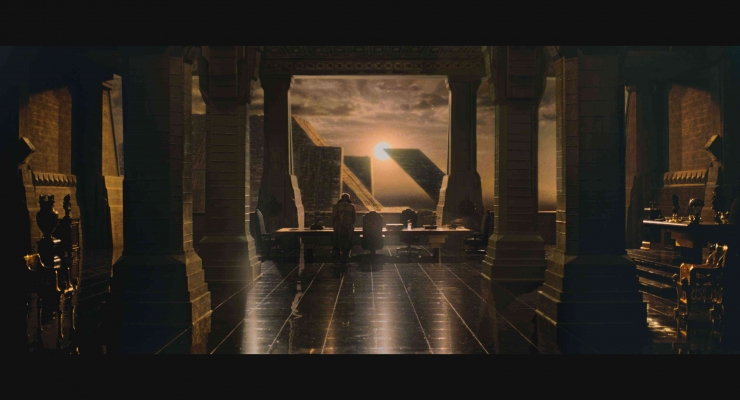 In spite of 4K and 6K scanning of the original 35 mm negatives, anyone expecting a stunning makeover of Blade Runner: The Final Cut will be disappointed as the grain of the original print makes its presence known from the get go. Some of the background scenes, particularly at the opening, now look clearly painted in. There are sequences like the rainy LA downtown and the Tyrell Corporate headquarters that appear more detailed but, for the most part, the improvement over the remastered Blu-ray version (also included) is subtle at best. Where I noted the most effective enhancement was in the facial close-ups that brought out details in pores or stubble.

One of the all-time great sci-fi flicks, Blade Runner:The Final Cut gets its ultimate audio/video makeover. If not the last word in visuals by today’s standards, this 4K Ulra HD Blu-ray with HDR version is the best that I have yet to see and the soundtrack is simply sensational. A must-get reissue, this film has always been in my top ten list. Highest recommendation.