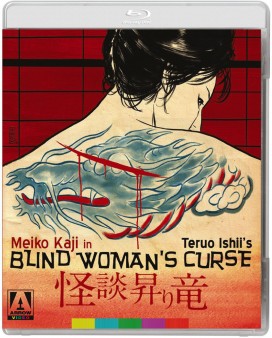 Akemi (Meiko Kaji) is the dragon-tattooed leader of the Tachibana clan. A brief encounter with a rival gang leads to the accidental blinding of that leader’s sister, Aiko (Hoki Tokuda). Blinded and in the shadows, Aiko seeks revenge, with the help of a black cat that drinks blood. Okay, so the cat is a human, from what I gather, and the human has the ability to turn into a cat and then drinks the blood of its dead victims. Make sense?

Not everything makes sense in Blind Woman’s Curse. The film is a hybrid of supernatural and Yakuza rolled into one. Akemi is a gorgeous warrior with a giant dragon tattoo on her back and her associates are also quite cute and once they take to her side they end up getting their own backs tattooed to complete a giant dragon back piece. The way these scenes are framed is one of the film’s major highlights. It adds even more depth to the film.

The film deals a lot with superstition and tradition and some of the characters have certain codes that they live by, which I understand. I think a lot of the scenes of exposition got lost in translation, because there are several instances that come to abrupt halts. Whether it’s stylized editing choices (remember, this was the beginning of the 1970’s) or whacky characters and comedy relief — Blind Woman’s Curse can only be taken seriously half the time and that usually involves Akemi and Aiko’s story arc. Everything else plays secondary or not at all to their plight.

I mentioned that the film involves Yakuza and I think it’s neat that females, especially at that time, were portrayed to be as ruthless as their male counterparts. Akemi wields a sword with no mercy and the blood really does spurt and flow. I was surprised to see how violent Blind Woman’s Curse was. I got some Kill Bill flashbacks while watching the film. As far as production values go the film does look great but some of the backgrounds are obviously painted backdrops. Still, it doesn’t make the film look any less “cheap” due to it being entertaining — faults and all. I would give Blind Woman’s Curse a mild recommendation.

Blind Woman’s Curse is presented in 2.35:1 and is taken from a 35 mm Cinemascope print. The film retains a lot of depth within its 2.35:1 frame – you can make out everything in the foreground, background, and middle ground perfect. The image, with the exception of a few instances, looks great for a 45-year old film. Colors look bold and beautiful and I did not notice any fluctuations in terms of contrast or sharpness tweaking. Whatever materials were used for the remaster the folks supervising made sure no tinkering was performed on the print that wasn’t needed. Granted, some minor bits of hairs, specs did get through, but it does not lessen the overall quality.

Blind Woman’s Curse is presented in LPCM 1.0 and for a film of this age and condition it’s perfectly acceptable. In fact, it’s quite robust as far as 1.0 soundtrack’s go. Dialogue, action, ambience, etc., are all encased within the center channel and it sounds quite pleasant. It doesn’t feel like everything is rattling about – it’s got some real depth and fidelity to it. Music also comes through quite nicely and is free of echoing, clipping, and distortion. Please note that since this is a 1.0 channel presentation there are no other channels (LFE included) with sound. You can split the 1.0 signal and watch it via your left and right speakers but it’s still technically mono. Regardless, this soundtrack is above average in its presentation.

The pickings are slim for Blind Woman’s Curse. Outside of the Jasper Sharp commentary track there really isn’t anything worthy of note. We do get a DVD copy of the film in addition to the original trailer and trailers for the Stray Cat Collection, which comes from the same studio has Blind Woman’s Curse.

Blind Woman’s Curse was very entertaining although a little flawed in terms of some of the ideas it was trying to convey. There’s a great deal of superstition and mysticism involved along with traditional Yakuza style gangster violence. The Yakuza action reminded me of Kill Bill and I don’t doubt that some of what was in this film served as inspiration for Quentin Tarantino and his KB films. The video and audio specifications are above average but the ball is dropped in terms of special features. It does have a nice commentary with a Japanese film historian and the trailers included are also satisfactory — so much so that I can’t wait to get my hands on the Stray Cat Rock set but that’s a review for another day. Blind Woman’s Curse is recommended.