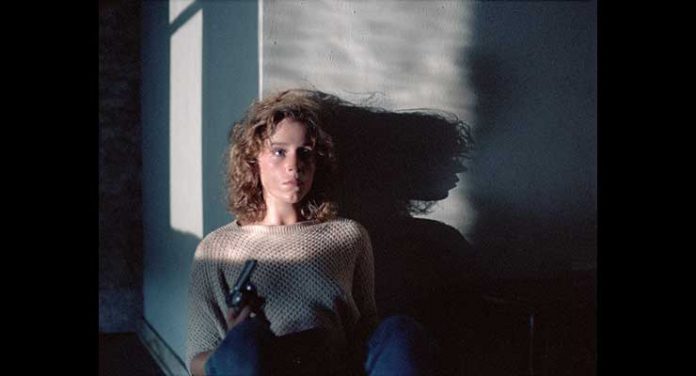 In 1984 the Coen brothers, Joel and Ethan, embarked on their first feature film, the dark neonoir homage Blood Simple. Showing a remarkable amount of confidence in their debut outing, the Coens directed M. Emmett Walsh as Visser, a slimy private detective hired by bar owner Marty (Dan Hedaya) to kill his adulterous wife Abby (Frances McDormand) and her lover, Ray (John Getz), one of Marty’s employees. But Visser has plans of his own. Visser pulls off a double-cross and murders someone else. From that point on, things begin to spiral out of control for all the players involved, in what becomes an increasingly bloody and complex series of violent twists.

The Coen’s dark sense of humor and irony was already on full display in Blood Simple, from each misconception to every poorly done and terribly violent attempt at cleaning up a mess, that only serves to lead to more blood and more death. Sonnenfeld’s arching, angular camera angles, the bright neon, the play with shadows, and the fixation on mundane objects, like one of the final shots on Visser’s under view of a bathroom sink all reset the direction of the so-called neo-noir genre.

Veteran actor M. Emmett Walsh puts on one of his standout character performances as the sleazy private detective here in Blood Simple, being the motivating point. He is the sort of morally dubious character that every good noir needs. One shouldn’t count out the femme fatale either, Frances McDormand, who gets all the men in a tizzy and turning “blood simple” through her indefinable charms.

The Coen’s would go on to make much more famous films like Fargo and No Country for Old Men, but Blood Simple remains a dazzling debut and arguably their most raw and simple, but not simplistic, creation.

The new digital transfer of Blood Simple was created in 4K 16-bit on a Scanity film scanner from the original 35mm camera negative. MTI Film’s DRS was used to manually remove thousands of instances of dirt, debris, scratches, splices and warps. Image Systems’ Phoenix was used for jitter, flicker, small dirt, grain, and noise reduction. The film is presented in its original 1.85:1 framing in an AVC 1080p encodement on Blu-ray Disc.

The Coens and cinematographer Barry Sonnenfeld have gone on record as saying that they were rather inexperienced with the new fast speed film stock and cameras they were using at the time (it was Sonnenfeld’s first time shooting on 35mm), so the result was an often grainy film, but one that looks completely natural and pleasingly filmic in this transfer from Criterion. There are some darker scenes where the grain pushes very close into noise, but the overall crispness and extended detail and nuance is not compromised. The colors are incredibly vibrant, especially the dazzling neon in the bar that serves as the central location for the film. 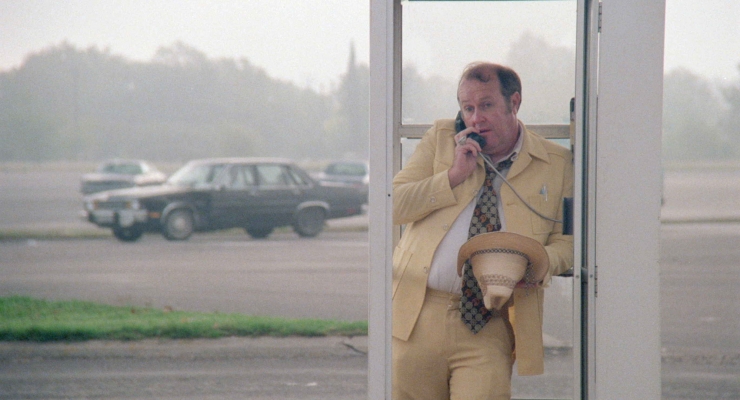 Blood Simple gets a new 5.1 audio mix supervised by sound editor Skip Lievsay. Additional restoration was performed by the Criterion Collection using Pro Tolls HD and iZotrope RX. The mix is offered in DTS-HD Master Audio and it sounds very natural and atmospheric with good balance and lots of movement through the soundfield of solid sound effects like cars driving by, doors slamming off to the side, or songs filling a barroom. The gunfire rings true through the speakers without any sharpness, dialogue is clean and dynamic range is preserved.

As is typical with Criterion Collection, we get a good selection of highly informative extras. Most for this release are new interviews with the filmmakers, the cast members, and even the composer.

A raw and gritty neo-noir debut from Joel and Ethan Coen, Blood Simple gets a magnificent Blu-ray release of its 4K restoration from Criterion Collection. This one should be in every Coen brothers fan’s collection.