One of the most brutal and realistic depictions of World War II since Saving Private Ryan, 2014’s Fury, directed by David Ayer (Bright, Suicide Squad) depicts an US Army tank squad battling their way across Germany in April of 1945 as Hitler and the Germans are getting as desperate as possible to hold off the allies and gain a victory.

Although the newcomer Norman upsets the balance of what has become somewhat a makeshift family, a brotherhood, Collier does his best to keep the unit focused on one thing – killing Nazis, even of that means he has to be as cruel as he can toward the frightened and idealistic Norman. In one scene, he forces Norman to shoot a captured SS soldier in the back. It doesn’t really succeed in toughening Norman up, but eventually the ravaged of war do take their toll, and an incident with a local German girl, a bombing attack, and a tank battle against the Germans bring Norman into the fold.

Fury is a gritty war film, as war films tend to be. There isn’t anything idealistic lurking underneath the surface. This is all about the human experience of battle, the fear, the bloodshed, the disparate personalities thrown together to complete one functioning unit that must work to survive. There are a lot of bad things that go on, on the battlefield and in proximity to it. Fury confronts all of them and rather than trying to build toward some grand, happy ending, it instead leads us toward this one singular squad’s ultimate date with fate and whatever that outcome may be.

The film’s climax is a stunning visual and aural assault of battlefield pyrotechnics, that one could almost be fooled into thinking was something out of Star Wars (I was) – unless one realized that tracer ammo was used during World War II to light up the ammunition in an array of colors. The end of this battle and the film may feel left unresolved to some, but that is in, in a meta way, how war always is – unresolved.

Brad Pitt is better here than he was in Inglourious Basterds as the war hardened commander who shows only glimpses of compassion toward his overwhelmed underling. The entire cast are incredible together and brilliantly cast for their particular roles. 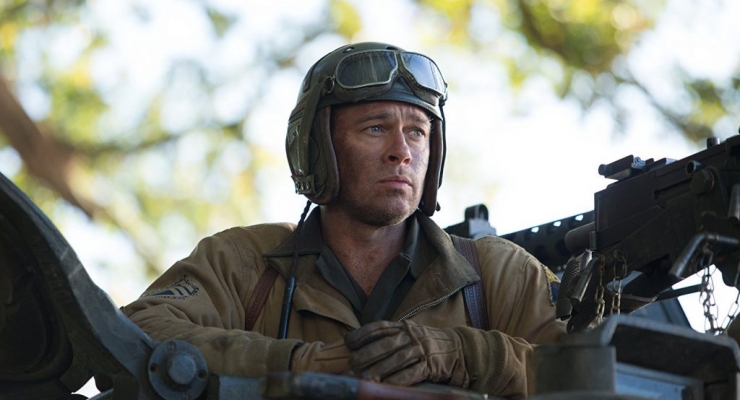 Fury was shot in the anamorphic, 2.40:1 aspect ratio with Panavision Panaflex Millennium XL2 cameras using Panavision C-, G-Series, ATZ and AWZ2 lenses on 35mm Kodak Vision3 250D 5207 and Vision3 500T 5219 film stock. A 4K Digital Intermediate was used in post-processing for color grading and mastering. The 4K Ultra HD Blu-ray is taken from the 4K master and arrives in a HEVC 2160p (4K) encodement with HDR10 high dynamic range. The film is gritty and desaturated, as many war films are, but the HDR and added resolution bring it to life with magnificent ‘pop’ in the highlights, wonderful gradations of orange in flames, and most of all the vivid colors of gunfire during the battle sequences. At first, I thought this was some Hollywood gimmickry to make these battles appealing to contemporary audiences familiar with sci-fi fare like Star Wars – blazing reds, electric blues, bright oranges – but I was quickly informed by a colleague that I was mistaken. During World War II, tracer ammo with pyrotechnic explosives in the base of the rounds were used to aid in aiming. Red was often used before other colors were later incorporated. Fury, and especially this 4K Ultra HD release, is arguably one of the most authentic portrayals of that effect. While the colors appear on the Blu-ray, they aren’t anywhere near as shocking or bright and varied. The crispness and texture of the film grain isn’t as present on the Blu-ray either.

Fury gets an Atmos mix that is arguably a reference mix for all war films on home video. This one may even outdo Saving Private Ryan – and that’s saying something! The height channels are used really well to capture the distant sounds of explosions as well as the tight, confined ambience inside the tank. The tank battles are mixed awesomely, with sounds shooting from every angle, tremendous balance and bombast, and booming low end.

Fury is stuffed with special features that go behind the scenes on the production, include interviews with the cast and crew, and delve into the history of the tank battalions of World War II.

Fury gets an incredible 4K Ultra HD transfer from Sony that hits just in time for Memorial Day and ahead of Father’s Day. This one is a winner.