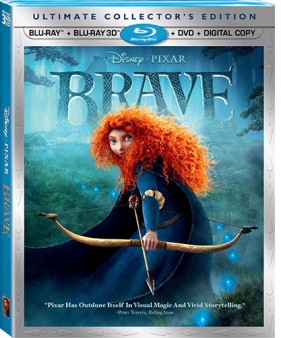 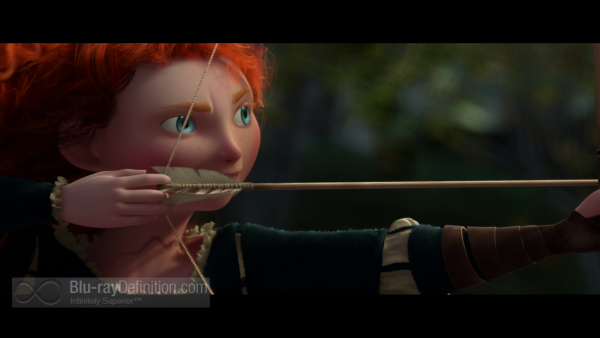 Brave is the newest film from famed Pixar Animation Studios, known for creating the Toy Story films. With this being their 13 feature, Brave marks Pixar’s 1st film with a female heroine at its helm. The story tells of Merida (Kelly Macdonald), a skilled archer and headstrong daughter of King Fergus (Billy Connolly) and Queen Elinor (Emma Thompson). Determined to carve her own path, Merida defies an age-old custom sacred to both her family and the people of her land, that being her having to chose her suitor after a series of skilled events. When her actions inadvertently unleash chaos in the kingdom, she must now use her skills and resources to undo a beastly curse before it’s too late. What results is yet another charming, funny, heartfelt effort from Pixar.

Akin to that of prior Pixar animated efforts, Brave marks another notch in the plus column for the team at Pixar. What works so well here is not necessarily the visuals, as they’re just as good as we’ve come to expect from Pixar (more on that below). Nor is it the voice acting (which is excellent), it’s the subtle tones to the film’s story. The connection between parents and their daughter, really the importance of family, highlights the plot of this one. It’s this little aspect that truly helps to make Brave one of the more enjoyable Pixar efforts in recent times. In all reality, Pixar is that rare studio that continues to churn out hit after hit (heck, even the somewhat disappointing Cars 2 is light years ahead of other studios’ efforts.) 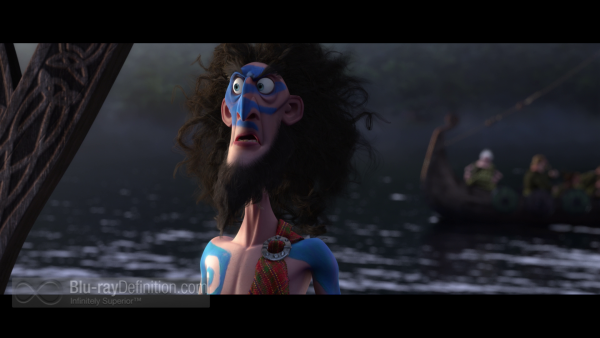 The film’s 2:39:1 framed, AVC MPEG-4 encoded 2D transfer is absolutely stunning, something we’ve come to expect from Pixar. Created completely digitally, this image is one of the best animated offerings of the year (and I hope this release does show up on a few ‘best of the year’ lists). Detail is excellent, particularly that of character close-ups (see screenshot #4). Colors pop, as the film’s palette features a wide variety of colors ranging from the bright forest greens, to the nasty, dark blacks of the witch’s home. Essentially, this transfer continues the winning ways of both Disney and Pixar in the animated Blu-ray category.

The film’s 3D presentation shares a similar aspect ratio, but is encoded at MPEG-4 MVC. Regardless of the different encodement, this 3D counterpart shares an equally strong presentation. Detail is excellent, as is the film’s clarity. Ghosting is minimal, only occasionally rearing its head, and the image has that top notch quality only Pixar can release. Items do pop off screen, mostly during the rain storms or the initial arrows zipping at us. While these little accents do help the 3D presentation, what made this transfer quite good is how it handled the story. During the film’s theatrical run, I recall feeling the 3D was rather bland, and lacked any punch. Such isn’t the case here as I found the 3D absorbing and quite effective, almost as if it made the film’s story just that much more important.

Choose the 2D or 3D offering and know this: whichever you do choose, prepare yourself for an all around excellent transfer from the folks at Disney/Pixar. 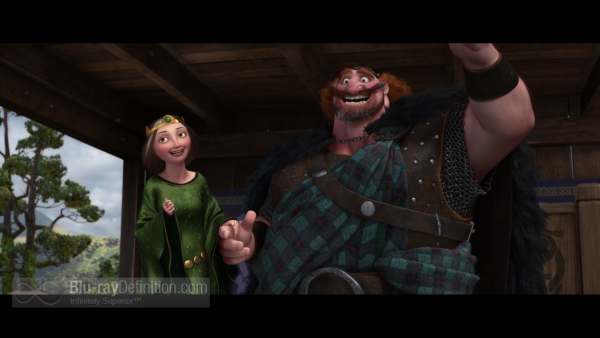 Brave arrives with a Dolby TrueHD 7.1 offering, one of which is excellent. Dialogue is well reproduced via the center channel, with no instance of drop out or any real problem. Atmosphere, particularly during the thunderstorm or the skilled events, is fantastic offering up a solid 360-degree aural experience. LFE is deep at time giving us the kind of low-end that we might not expect from an animated offering. Panning between rears are invisible completing the kind of audio that we would want to throw into our players to please the little ones, but also the type we’d demo off to our friends. Excellent job here Disney/Pixar! 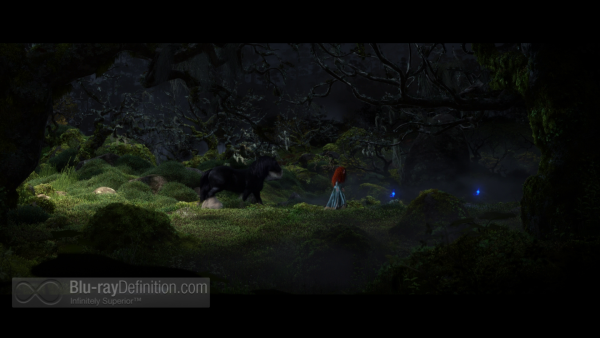 The provided supplements are featured in High Definition: 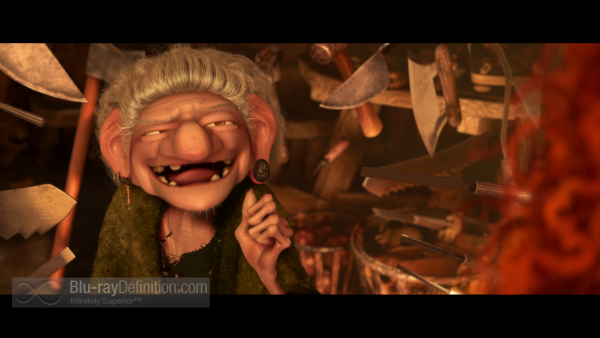 There should be no real surprise that Disney/Pixar, on both the physical film quality/Blu-ray release, has yet another winner on their hands. Highly Recommended on all fronts, regardless of age. 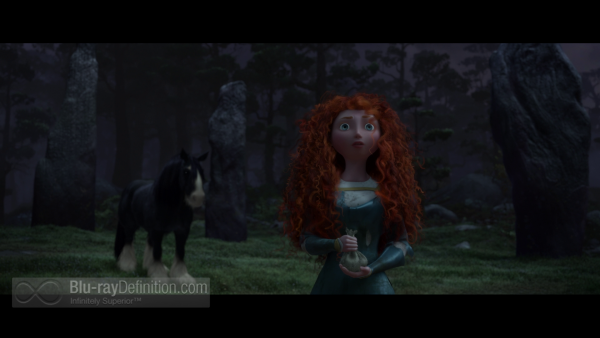 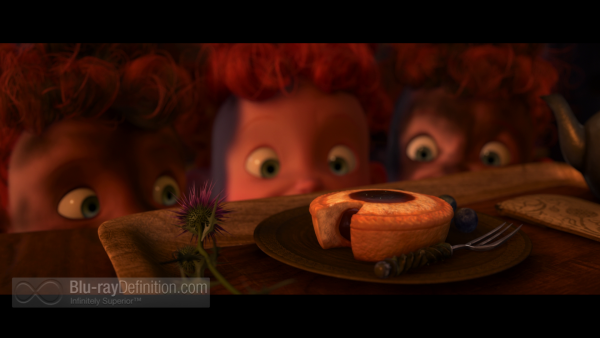 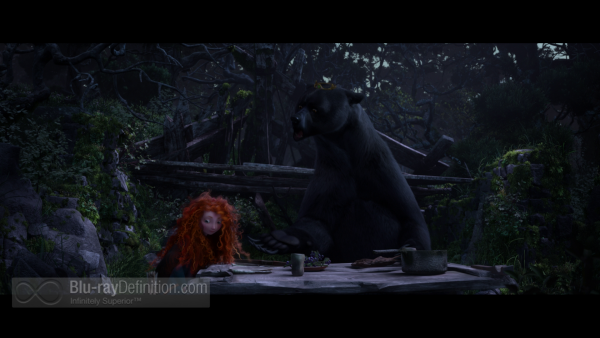 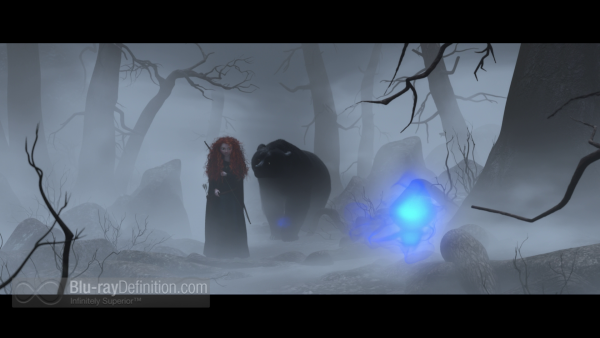 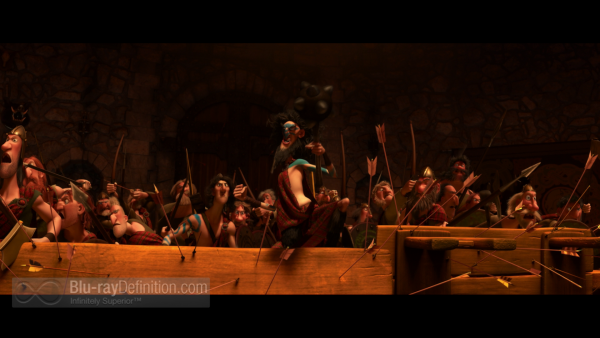