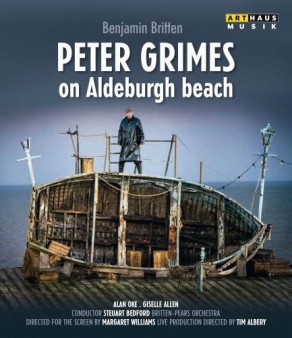 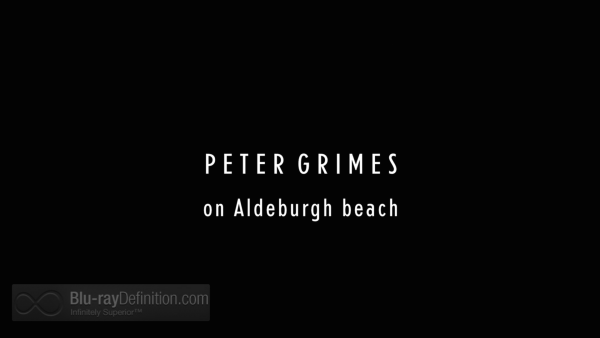 Peter Grimes has been Benjamin Britten’s most popular opera since its 1945 debut. 2013 marked the centenary of Britten’s birth and the date of this production. Montagu Slater based his libretto on a poem by George Crabbe, The Borough, that relates the story of a fisherman at odds with his village and fellow villagers. 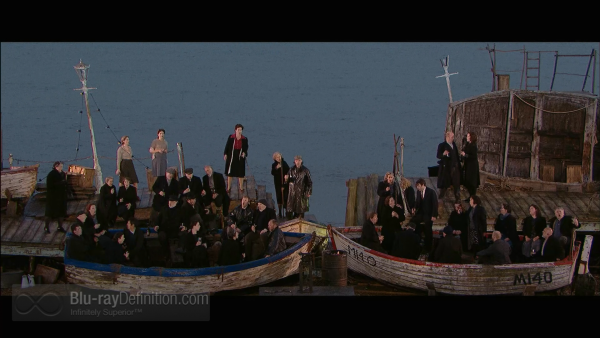 The Prologue is a courtroom hearing on the death at sea of Peter Grimes’ (Alan Oke) boy apprentice that results in Grimes’s exoneration. Grimes’ few friends in the Borough are old Captain Balstrode (David Kempster) and the spinster school-mistress Ellen Orford (Giselle Allen) who is secretly in love with the fisherman. 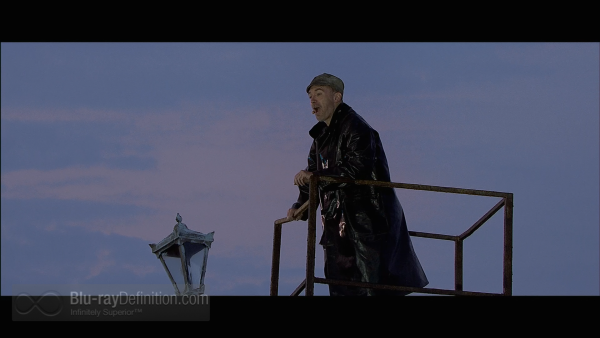 Action moves to the Borough and Auntie’s (Gaynor Keeble) “The Boar” tavern as we meet the proprietress and her “nieces” (Alexandra Hutton and Charmian Bedford) who sell their favors to the men of the village. Other characters arrive including the nosy Mrs. Sedley (Catherine Wyn-Rogers) who desperately buys drugs from Ned Keene (Charles Rice). Grimes needs another apprentice who will be brought by the carter Hobson (Stephen Richardson). A furious storm rages, and finally subsides without too much destruction. 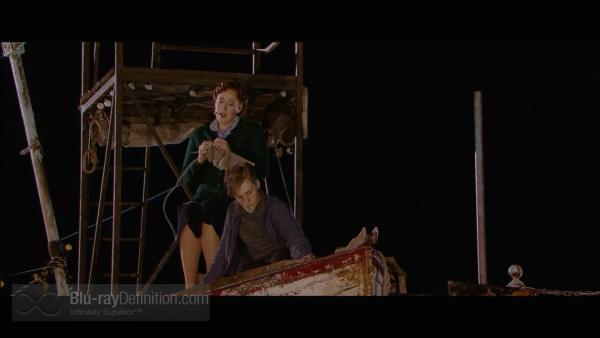 On Sunday, outside the church, Ellen notices that Grimes’ new apprentice shows signs of mistreatment, but when she brings this to Peter’s attention, he hits her. Later, Grimes is about to discipline his new apprentice, but the boy accidentally falls to his death. The villagers have already gone to Grimes’ hut to deliver their provincial justice, but he is not at home. Peter appears, now apparently at his wits’ end. Balstrode tells Peter that the only solution to his dilemma is to row out to sea and sink his boat, the event that concludes this opera. 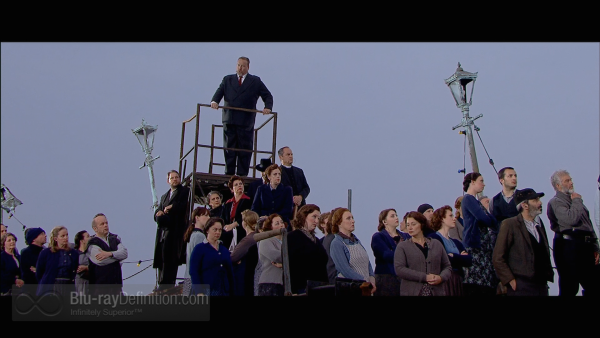 Setting the opera in Britten’s own town of Aldeburgh, and on a beach with clouds and surf in the backdrop, gives the audience a unique view of this masterpiece, possibly as the composer would have loved it to have seen it performed.  Strong contributions by the principals, particularly given the outdoor staging, and under the knowing baton of old hand Steuart Bedford, give us the surge of the sea and the harsh realities of life in this poor coastal village. 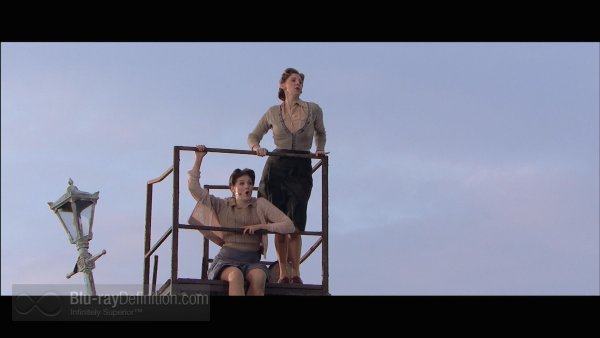 Set in the era of the opera’s premiere at the end of WW II, set and costume designer Leslie Travers gives us an authentic period feeling. Screen director Margaret Williams (also responsible for the original production of George Benjamin’s Written on Skin) finds the right balance between the beach and its natural images (aided by a filmed sea and sky backdrop) and the boats and boardwalk. This film was shot with five Sony HDC 1500 cameras at an aspect ratio 2.38:1; two Canon 5D’s placed in different parts of the set. I am certain that this has much to do with the excellent details and lack of motion artifact. Certainly, one of the best HD filmed operas that I have seen to date. 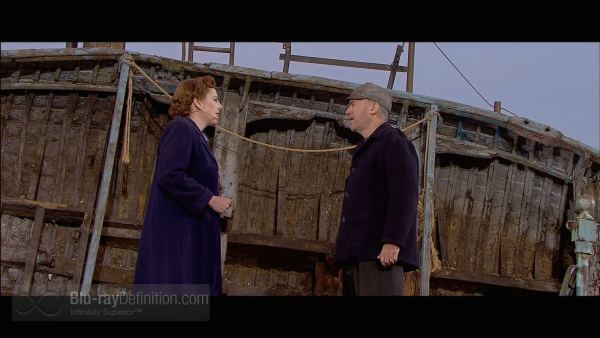 As the score soundtracks were laid down previously from concert performances in Snape Maltings, the coordination of orchestra and voices (head-miked on the set) is sensational.  There is little, if any wind noise. The surround version has a modest advantage over the two-channel LPCM version. 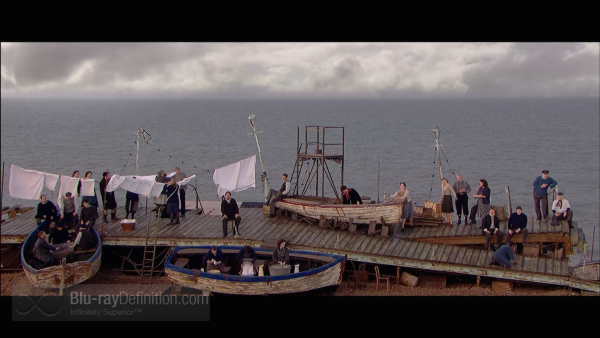 There are about twenty minutes of extras (all in English LPCM 2.0 48k/16b), including interviews with Alan Okie (Grimes), Giselle Allen (Ellen), Gaynor Keeble (Auntie), Catherine-Wyn Rogers (Mrs. Sedley), David Kempster (Captain Balstrode), Henry Waddington (Swallow).  A brief on the “Green” aspect of this film follows, as underwritten by the Low Carbon Innovation Fund.  Producer and Executive Director of the Aldeburgh Music Festival,  Jonathan Reekie discusses Britten’s life and career. Finally, there is a time-lapse view of the rather amazing staging as set up on the beach.

A program booklet contains track listings, a terrific note by the composer himself concerning the composition of this opera with particular insight into the difficulty of mounting a contemporary British opera. Director Williams contributes a background essay on the filming of the production. 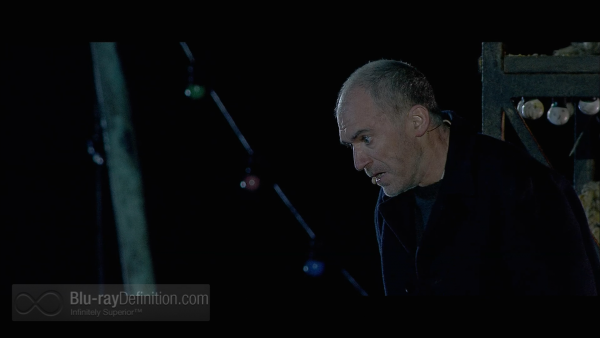 This is the second Blu-ray release of Peter Grimes in the past year (the previous one being a well done post-modern version from La Scala). Of course, there are two iconic DVD versions headed by tenors Peter Pears and John Vickers that have long set the bar very high for any successors. The former, for whom the part was written, gives an introspective and frequently painful side to the troubled hero while the latter offers us a more extroverted, maniacal and often brutish characterization. Alan Oke takes a middle ground, balancing Grimes’s faint hopes at redemption and social acceptance with his inevitable realization that such a life will be impossible. Given the striking seaside setting and a strong cast (and some overlap with the La Scala production in the roles of Mrs. Sedley and Hobson), this Peter Grimes becomes my current top Blu-ray choice. 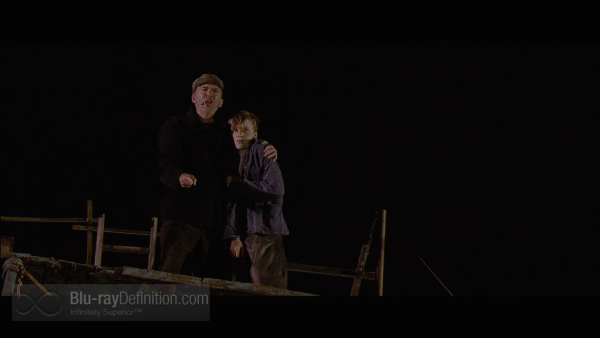 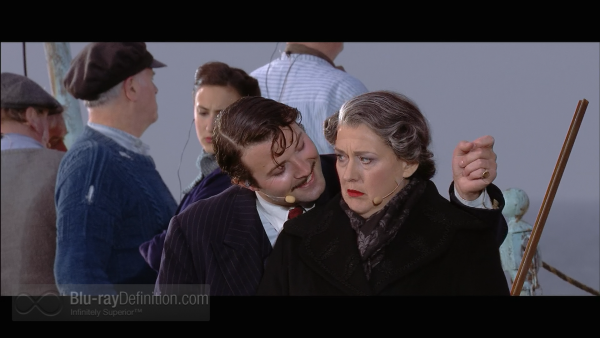 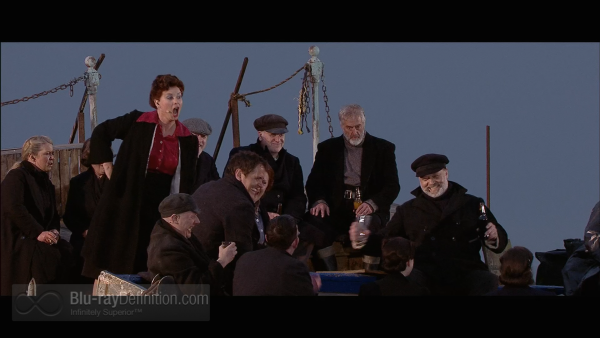 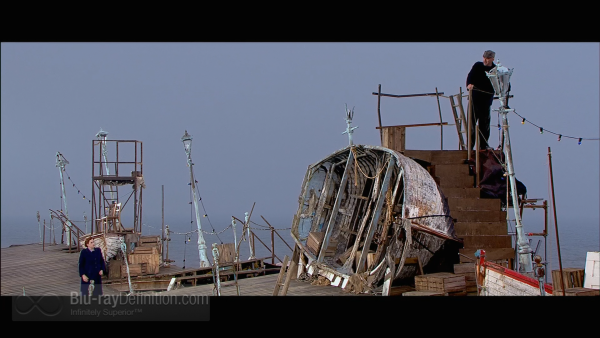 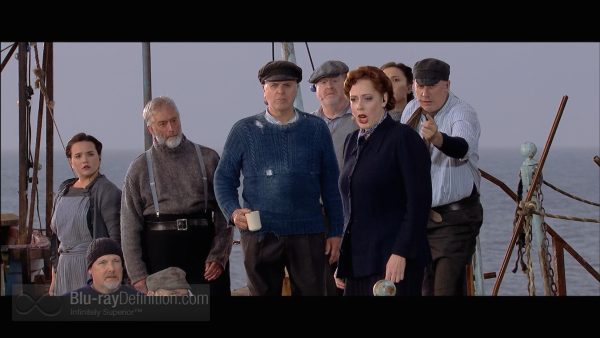