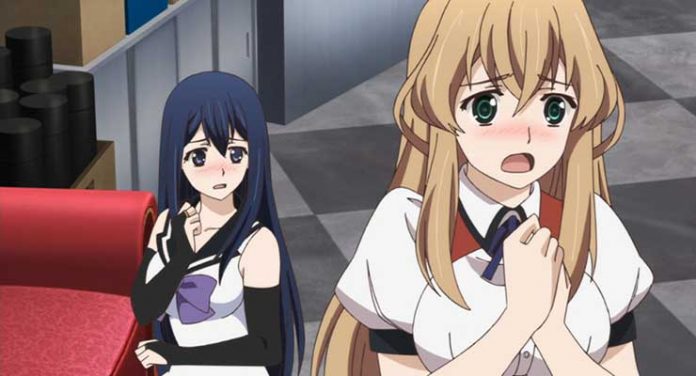 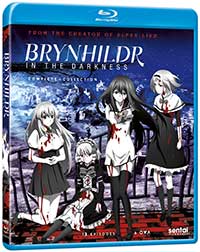 Brynhildr in the Darkness (極黒のブリュンヒルデ) is based on the manga series by Lynn Okamoto. It is a science fiction fantasy series with tinges of harem, romance and action that basis its story around the male high school student Murakami Ryōta.

When Murakami Ryōta was little he had a childhood friend, a girl he always called “Kuroneko” (black cat). The two had a very close relationship, perhaps even what one might call “puppy love” and they always used to watch the stars together. Kuroneko told Ryōta that she believed in aliens and that she could prove they existed, because she’d seen one and she could show him. So one day, she attempts to show Ryōta the alien, but during the course of climbing a dam to get to the place where the alien is, Kuroneko slips and falls. Ryōta tries to grab her, but he cannot hold on. Ever since, he has blamed himself for her death and faithfully watching the stars in her honor, now doing so from his high school astronomy club, of which he is the sole member. One day, a new transfer student joins Ryōta’s school. Her name is Kuroha Neko, and to Ryōta’s amazement, she looks just like Kuroneko, only older now. But Neko doesn’t know who Ryōta is, or so she says. Still, later that day, after surprising Ryōta yet again by joining his astronomy club, still insisting she doesn’t know and never knew him, Kuroha Neko saves Ryōta from an unforeseen disaster and displays supernatural abilities while doing so. She claims she is a witch. Ryōta finds she is living with another girl, Tachibana Kana, also a witch, but one who is mostly paralyzed and can only use her hands to type out on a special device to communicate. Kana’s ability is the ability to predict disastrous future events, on which Neko can take action to save people. They have both been genetically modified by a nefarious organization to be able to use these “witch” powers, but they are low-level witches, cast off and now on the run. To stay alive they need help and a special drug from the very organization that wants them dead.

Eventually, Ryōta finds himself surrounded by not two, but five of these witches, all in need of this drug, and his help, and all, as anime tends to work, finding themselves becoming emotionally attached to Ryōta. They are

mostly C and B-ranked witches, with the exception of one A-ranked witch, Wakabayashi Hatsuna, who possesses the power to regenerate and to heal others, so, she can technically never die, unless of course she does not get the drug she and all the other witches need to keep on living – or, they have their switches pulled out. Each of them has a strange implant at the base of their neck that contains something unknown, maybe an alien entity that is allowing them to generate these powers. If it flips, they need to recharge to use their powers again. If it is pulled entirely, they melt and die.

I enjoyed the way Brynhildr in the Darkness was able to combine elements of fantasy, science fiction, action and mystery into a cohesive storyline and make viewers really start to care about the characters. The flaw here was the writers’ typical use of the harem plot device, which has been used so many times in anime that calling it cliché is in itself a cliché by now. This series could have done without it, and it would have been stronger is if it honed the story of Neko and Ryōta and built around that more, and not making it just another side romance. That said, we do get some beautifully drawn characters and excellently animated action sequences, though nothing here could really be considered innovative.

This is a good-looking AVC 1080p encodement framed at 1.78:1 from Sentai Filmworks of the series’ digital animation. The line art is crisp and it is free from major artifacts. Colors don’t really pop all that much in this series, but it has an appropriately cool palette that emphasizes its moodiness. Primaries like red to standout, and shades of blue look the most vivid and pleasing to the eye.

2.0 stereo mixes. The Japanese track was my reference and it was a good mix with clean and clear dialogue, and good sense of stereo separation and natural dynamics. The voice cast were pretty engaging as well, which I can’t say I felt as much when checking in with the English cast. Blake Shephard wasn’t doing anything for me as Ryōta although I’m sure dub fans will be fine with his performance.

In addition to the usual clean opening and closing animation plus Sentai Filmworks trailers, we also get the OVA episode of Brynhildr in the Darkness, “Much Ado About Nothing,” with this collection, although its placement at the end of the series as episode 13 puts it out-of-order, when it really should be placed between episodes 11 and 12.

Brynhildr in the Darkness is an interesting if a little bit flawed series that looks great and has a lot of strong points. It takes the harem element, though misguided, and places it in somewhat different surroundings, mixing up an almost Gothic feel with Germanic mythology and science fiction. The romance tempers some the series’ doom and gloom to lighten things up just a tad.