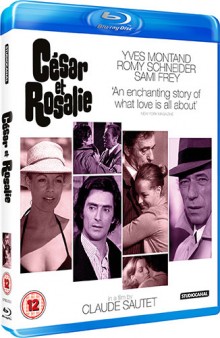 The beautiful Romy Schneider anchors the cast of César et Rosalie, a classic French romance that dives right into an age old dilemma – the love triangle – with clever and brave audacity. Schneider is the titular Rosalie, a single mother of a young daughter who is involved with the charming, older self-made businessman César (Yves Montand), and she seems rather happy, until her old boyfriend David (Sami Frey) shows up after five years. Suddenly, Rosalie’s old feelings for David begin to stir, but they aren’t enough to make her leave César, who is wealthy, stable, and whom she does truly love. When César begins acting irrationally jealous over David, even turning violent, it drives Rosalie right into David’s arms. But César doesn’t give up on her and he tries to win her back. Soon Rosalie is back with César, but still dreaming of David, so César concocts a plan to bring David to their new house to force a final decision. Rosalie, however, won’t play along, and ends up caught between two men, who, ironically, seem to be becoming closer as friends even as they become bigger rivals for her affections.

César et Rosalie is smart and romantic even as it is heartbreaking. It never really seeks to solve any questions or force viewers to root for one outcome over the other. Just as the film begins with a question as to whether Rosalie will leave César for David, so does the rather vague ending leave things open ended, just as life often is.

Much of César et Rosalie’s charm undoubtedly comes from the magnificently beautiful Romy Schneider who plays the capricious yet strong willed Rosalie sublimely. Yves Montand is also especially good as the charismatic César, but one must strain to find what it is that Rosalie finds in David, in all honesty. Unless, if reading into it, David is simply the other half of her character, because Sami Frey as David lacks much charisma at all. He might as well be a doornail next to César. But then, that does in some way make the film all the more real in the end, the puzzle of attraction that is to say.

While there are some spotty scratches and instances of dirt that can be detected here and there, for the most most part César et Rosalie looks reasonably good in this AVC 1080p encodement from StudioCanal. There is a lot of detail in close-up shots, flesh tones look rather natural, the contrast is good, and grain is present, although at times not quite as natural in appearance as I would like it to be. Some darker areas are at times a little washed out, but shadow detail is nicely extended.

The original monaural soundtrack is offered in French DTS-HD Master Audio 2.0 (48kHz/16-bit). It’s quite boxy and rather forward sounding, especially with its musical score that seems outrageously loud in comparison to the dialogue. However, everything seems quite clean and intelligible.

There’s nothing beyond this half-hour “making of” featurette that explores the film’s core theme of a complex love triangle.

César et Rosalie is one of those classic wisps of a French romance on film that refuses to tie anything up with a neat little bow, sort of like Truffaut’s Breathless . You’ll leave this one with a bittersweet feeling, but you’ll enjoy it nonetheless.