Guy Ritchie has a penchant for taking classic stories and turning them into properties for contemporary audiences. He did it with the Sherlock Holmes franchise starring Robert Downey, Jr., he did it recently with his adaptation of The Man from U.N.C.L.E., and now he’s done it again with this middling retelling of the King Arthur myth, King Arthur: Legend of the Sword, now making its home debut on 4K Ultra HD Blu-ray.

The film stars Charlie Hunnam (The Lost City of Z, Pacific Rim) stars as the titular legend in the writer/director’s film here. Legend of the Sword borrows heavily from the style of Ritchie’s previous action/adventure films like his Sherlock Holmes franchise by turning this into an almost tongue-in-cheek comedy that combines magical fantasy elements of The Lord of the Rings with more traditional story elements from what we usually associate with King Arthur.

An opening scene shows a big battle between brothers Uther (Erica Bana) and Vortigern (Jude Law) that also involves mages and mystical beasts including giant elephant-like creatures. Vortigern gets the best of Arthur’s father Uther who sends Arthur away. A short, quickly paced sequence shows Arthur growing up in a brothel being raised there by the prostitutes and learning martial arts under the tutelage of George (Tom Wu) as he learns street smarts and squirrels away a small fortune for himself. Finally, Arthur’s an adult, Vortigern is searching for the true heir to the thrown of England by rounding up males of the appropriate age and forcing them to try to pull Uther’s sword Excalibur from a stone. Arthur, naturally, is the sole man able to remove the sword, making him the prophesied “born king” that will topple Vortigern’s reign and usher in a new kingdom. Now it is up to a banished mage (Astrid Bergès-Frisbey) and a group of friends and outlaws to help Arthur escape death at Vortigern’s hands and overthrow the evil king who has used black magic to keep himself in power.

To call this film ridiculous would be an understatement. It suffers from terrible dialogue (“What a waste of brandy.”/King Arthur: But doesn’t it make the palace burn well?”) and fidgety editing. Even the musical score doesn’t know what it wants to be – it goes back and forth between traditional British folk and moody rock music. The fantasy elements do not fit in to the story at all. It is really like they’ve tried to shoehorn Sauron and Voldemort into the legend of King Arthur’s dark ages setting. The performance from Charlie Hunnam varies from swashbuckling wiseass to troubled, angst-ridden hero – in other words, it’s all over the place. I don’t think it’s his fault, it’s Ritchie’s. He’s too concerned with making a quick-paced blockbuster packed with visuals and witticisms that he hasn’t made a film with characters with depth and a story one can actually follow. 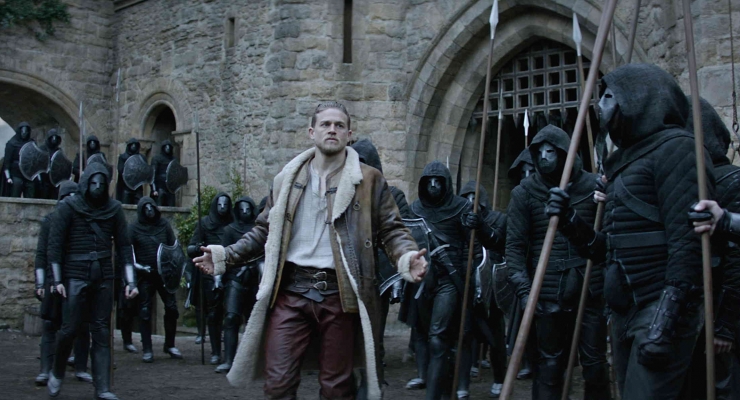 King Arthur: Legend of the Sword was shot on Arri Alexa (as PANAVISION® Cameras & Lenses) and Arri Alexa XT cameras in 2K resolution and a 2K DI was used in post-processing. It was also mastered in Dolby Vision high dynamic range. The film is brought to 4K Ultra HD Blu-ray in an HEVC 2160p (4K) encodement framed at 2.40:1 with HDR10 high dynamic range. The film has a de-saturated color palette that doesn’t really pop much, but the application of HDR helps to liven it up. Highlights like torches and the flaming special effect of Excalibur really standout. That said, overall gamma at times looks a little high and shadows don’t always look as dark as they could be. That said, in comparison to the Blu-ray, the Ultra HD has a far better dynamic range, especially in the final act where it looks like gamma was lowered a little and blacks get a little inkier. It looks more nuanced on the 4K Ultra HD disc that it does on the Blu-ray. Detail is fairly even across both discs, just slightly crisper on the 4K UHD thanks to the better compression, but it is up-scaled from a 2K source after all.

The 4K UHD and Blu-ray discs of King Arthur: Legend of the Sword get an immersive Dolby Atmos mix. This isn’t one of the best Atmos mixes I’ve heard to date on disc, but it is still entertaining. They seem to opt more for subtle atmospherics and musical instrumentation in the height channels than a lot of discrete effects. The balance is excellent however and there’s an abundance of low end extension that helps underpin the action sequences.

We get a collection of featurettes with interviews of the cast and crew and lots of behind-the-scenes footage. Most of them are pretty self-explanatory and they explore everything from the sword fight training to creating the sets of ancient Roman Londinium.

A misguided fantasy adventure version of the King Arthur legend, King Arthur: Legend of the Sword has some excellent visual effects, but a razor-thin story with two-dimensional characters. The 4K Ultra HD Blu-ray is a solid release, but doesn’t rate with the best out there currently.