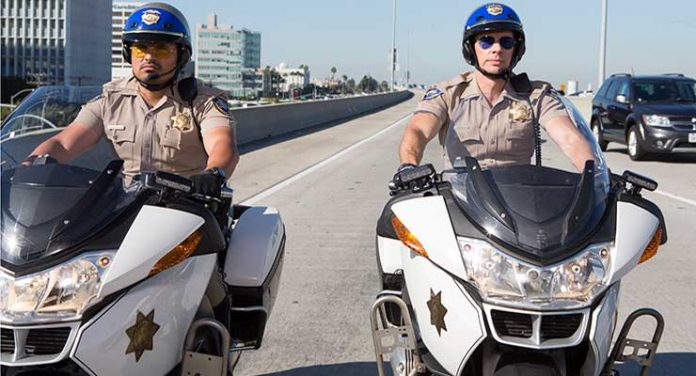 During my childhood in the late 1970s and early 1980s the TV show CHiPs, which stands for California Highway Patrol, was a part of my regular television diet. It followed the exploits of two motorcycle officers, the freewheeling Ponch (Eric Estrada) and the straight-laced Jon (Larry Wilcox) on their daily beat, hunting down criminals, helping damsels in distress with their flat tires, and of course, since they were both single, having a good time now and then with the ladies. This 2017 adaptation by writer/director/actor Dax Shepard serves as an action/comedy update to that rather benign and quaint ‘70s series by today’s standards and serves it up with typical, post-millennial sensibilities. Shepard’s screenplay changes the dynamic ever so slightly by making Ponch (Michael Peña) the supposedly by the books, straight-laced cop whose actually an undercover FBI agent and Jon (Shepard) the wild, former motorcycle racer coping with a separation from his cheating wife (Kristen Bell) and numerous injuries from his previous occupation that often leave him so unable to move that he has to chew on opioids like M&Ms and beg people to carry him into a warm bath naked (cue homophobic scene with Ponch’s face bouncing Jon’s genitals).

You can tell where the film is going pretty quickly – Ponch and Jon don’t really get along, but they are paired up as partners and bicker constantly. They can’t ever be friends – that is until they end up investigating a string of robberies that appears to lead right back to the police department and each of them has to save the other’s life. Car chases, motorcycle chases, gunfights, numerous explosions, and even an accidental beheading ensue. Mix in some gratuitous topless women, degrading comments about certain female officers being unattractive as compared to one particular female officer, a bit more misogyny — Jon’s wife is a gold digger who’s cuckolding him and doesn’t care – and you have all the elements of a Roger Corman movie in what is a mainstream, A-List film.

Shepard does manage to string together some excellent action sequences in CHIPs and that is the film’s strongest asset, but even that becomes more or less burdensome when it is constantly interrupted by what feels like a lifetime of camp and incoherent plot twists, unnecessary gore (someone gets their fingers shot off near the end of the film) and what is a completely unsurprising ending. The film starts off with a statement that the “California Highway Patrol does not endorse this film. At all.” I find it difficult to believe that Rick Rosner, the creator of the original series would have endorsed it having seen the end result. 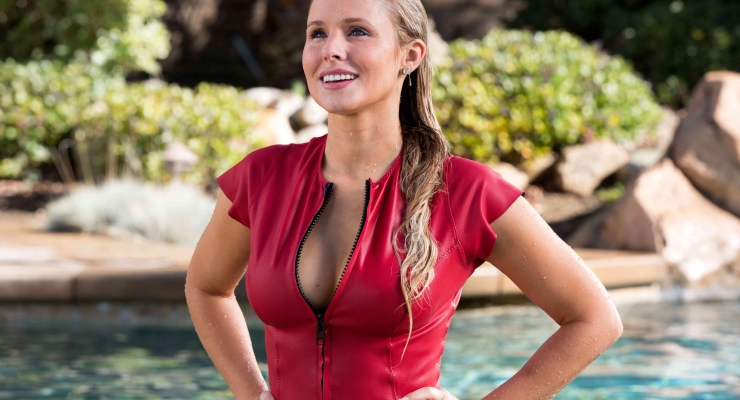 CHiPs was a digital production shot on the Red Weapon and arrives on Blu-ray in an AVC 1080p encodement. Being an action comedy it doesn’t have the ‘pop’ of big budget action films or dramas with heavily shaded and color coded imagery, but it still looks excellent on Blu-ray with crisp textures, natural colors, and strong contrast.

We get a DTS-HD Master Audio 5.1 mix for CHiPs that is aggressive for a comedy, but not atypical for an action film, so it falls somewhere in between. It certainly handles the rumble of the motorcycles with ease and the gunfire and explosions with authority while the surround channels get their share of solid effects mixed in. The dialogue is clean and full and the music is balanced with a hefty low-end.

The special features aren’t exactly abundant, but with Dax Shepard serving as an emcee of sorts, these features keep the mood light and do add up to a sort of “making of” with interview snippets and behind the scenes footage.

An absurd, crude, and unnecessary remake of a 1970s TV series that holds practically no resemblance to the original source, this movie does have some excellent action sequences, but its poor script spoils it. The Blu-ray, despite the quality of the film, is a strong A/V release.