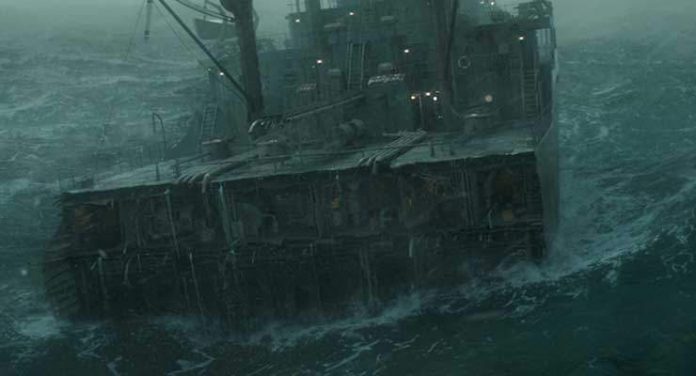 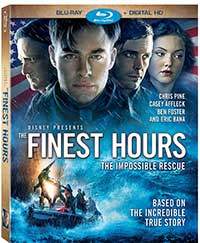 Disaster films are the Holiday go-to it seems for putting butts in the seats, especially when the label “based on a true story” can be slapped on the poster. The Finest Hours joins the likes of Everest for a big budget, special effects-laden historical journey down disaster lane that offers vicarious thrills that will get your heart racing and keep you on the edge of your seat. Unlike Everest, this one has a less dismal outcome, not to spill the beans.

In 1952 one of the worst blizzards to hit the New England coast literally rips an oil tanker sailing off the coast of Cape Cod in half. Coast Guard captain Bernie Webber (Chris Pine, Z for Zachariah, Star Trek into Darkness) and his crew are ordered to make one of the most daring rescues ever recorded with their tiny boat risking their lives in waves reaching as high as 70 feet and a compass that doesn’t work.

The performances from the male cast of The Finest Hours are commendable, including Pine and Casey Affleck (Triple 9, Interstellar),

but the female cast members are mere afterthoughts. Holiday Grainger (Cinderella, The Riot Club) is underutilized and Rachel Brosnahan (TV’s Manhattan, Louder Than Bombs)  is there only to play the stalwart housewife meant to stand by her man. Well, it is taking place in 1952 after all.

The Finest Hours is at its best when director Craig Gillespie allows the visual effects to take center stage — the monstrous waves about to crash down over the tiny rescue boat or the relentless ebb and flow of the mad sea as the two ships are tossed about and the crews, especially on the oil tanker, hustle to keep from sinking. It’s this kinetic energy that, pardon the pun, keeps the film afloat, not the wafer-thin characters who are no more than the usual stoic heroes that are faultless and self-sacrificing. This may be a “true story,” but we know no more about the truth behind the men on these ships today than we did before this film was made.

The Finest Hours was shot on the Arri Alexa XT Plus in 2.8K resolution and used a 2K DI. It comes to Blu-ray in an AVC 1080p encodement from Disney that looks as pristine as one would expect from a contemporary digital production. The CGI work doesn’t show any digital anomalies and looks exceptionally realistic, no banding is noticeable and overall, the picture has a very cinematic and filmic quality. Color is quite dull, but that is an artistic choice, so nothing really pops, and much of the film takes place on the dark, stormy sea, which doesn’t make for great eye candy. That said, the shadow detail is good and there aren’t any issues with black crush.

The Finest Hours gets an astounding DTS-HD Master Audio 7.1 mix that thrusts you right into the fray of the

storm. Look out, this one will give your audio system a serious workout with very deep low-end extension, lots of solid effects panned through the surround ad surround back channels, and a very wide dynamic range. It gets loud when the rescue mission is underway and coast guard boat is being tossed about on the sea. But, it also settles down back on land for some subtle atmospheric

While the supplements seem like a lot at first glance, mostly we get a lot of brief snippets of the cast and crew in EPK-style videos telling how wonderful the film is and how heroic the real-life people they portrayed were. Yeah, we get it.

A decent popcorn film based on true events, The Finest Hours thrills with its epic visual and aural effects, but falters on exposition and character development. The Blu-ray should move to the top of the list for anyone looking for prime home theatre entertainment.