Director Alan J. Pakula’s 1978 western Comes a Horseman is an outlier in the filmmaker’s catalogue. Pakula made his name in the early 1970s making films that reveled in the urban paranoia and downbeat mood of the Watergate era. Films such as Klute, The Parallax View, and All the President’s Men catapulted Pakula into the film world limelight, then came 1978’s almost quaint western, which seemed like a purposeful step away from the genre that had defined his career to that point.

Starring an A-list cast including Jane Fonda, James Caan, and Jason Robards, the film isn’t entirely devoid of that undercurrent of tension and suspicion that Pakula had been practicing up to that point. Based on a Dennis Lynton Clark screenplay, the story is set in the post-World War II American West. Single Ella Connors (Fonda) is struggling to hold on to her cattle ranch and defend it from older and unscrupulous rancher Ewing (Robards), who also happens to be her former suitor. Ella enlists the help of local rancher Frank ‘Buck’ Athearn (Caan) to help her run the ranch, keep it afloat, and defend it from Ewing. Also helping her out is wily old timer Dodger (Richard Farnsworth). Complicating matters are a group of land surveyors who want Ella’s property in order to drill for oil and Ewing who wants all of her land and everyone else’s – but so he can keep it away from the oil drillers.

The underlying themes of corruption, mistrust, and even violence are all present in Comes a Horseman as in Pakula’s other films, but this film is executed with such a melancholic, cliché about the “Old West” that, that undercurrent is drowned by bucolic sentimentality and caricatures of good versus evil on the Western plains. Robards’ Ewing is just a one-dimensional “black hat” while Fonda’s Ella starts out as a strong female character but seems to devolve into something less – she’s co-dependent on the rugged cowboy trope that is Frank.

Apart from the beautiful cinematic landscape that Comes a Horseman presents and the pastoral the score from Michael Small, there is really no doubt why the film is typically one of the overlooked ones from this director. 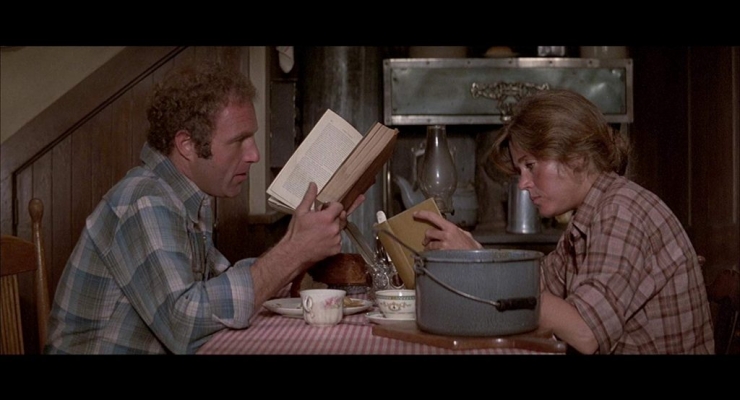 The film arrives on Blu-ray from the BFI from a master provided by MGM. It’s in an AVC 1080p encodement framed at 2.35:1. From the opening scene the picture quality looks a little bit off. Usually, I expect things to settle down a but after the opening title sequences, etc., but with this transfer one sees little nicks, sparkle and film softness pretty much straight through the presentation. That’s not to say that there isn’t enough detail here to offer a pleasing enough visual presentation, especially in the nearfield and in the colors, but it is not one of the more reference quality catalogue releases.

Comes a Horseman comes with an English LPCM 2.0 mono soundtrack. It’s clean, has clear dialogue and little in the way of noise, clipping or hiss. The dynamics are actually pretty good for a monaural mix.

As is usually the case, the BFI provides a copious amount of quality bonus features, including a wonderfully informative audio commentary from Scott Harrison, even if his presentation style is a little on the dry side. A relatively recent interview session with Jane Fonda is also very interesting to watch. The two classic British documentary shorts are in keeping with the BFI’s style of providing thematically themed films of interest and they are quaint little films.

This is a flawed film that is better than the sum of its parts would lead one to believe. Individual performances by the cast are excellent, particularly Fonda who puts in a typically strong performance despite the weak character she’s made to portray. Caan seems rugged and Robards does his best with the caricature he is given as well. The cinematography can’t be argued with either – beautiful landscapes provide a backdrop for this sentimental western morality play. Other than that, MGM provides BFI a middling master here making it a disappointment even for those hoping to admire the beauty of the film.