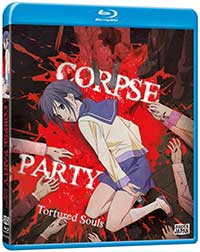 Corpse Party: Tortured Souls is a four-part OVA anime series that acts as a sequel to Corpse Party: The Missing Footage. It is the second in this franchise of anime based on the Corpse Party video game, and in keeping with the spirit of the brand, it is one gruesome, ultra-violent set of episodes that kicks shock value up to 11, even while it perhaps sacrifices storytelling to get there.

The story follows a group of students from Kisaragi Academy who, on a particularly rainy night after a school festival, decide to solidify their friendship with an oath by performing a ritual called the “Sachiko Ever After.” But shortly after performing it, they are roused by an earthquake, the floor falls out from

beneath them, and they find themselves trapped in Heavenly Host, the remnants of the elementary school that their school was built upon. Soon they are besieged by the tortured souls of the children of Heavenly Host and trapped in that world. As they try to find each other, they uncover the violent secret that led to the school’s demolition and the death of the wandering souls now lashing out at each of them.

Tortured Souls is dark and gritty, I’ll give it that. And there is no mistaking the alluring, eye-popping (literally, if you watch it, you’ll know what I mean) nature of the graphics in these four OVAs. If you enjoy the sort of bloodstained anime like Hellsing Ultimate, for example, then you are sure to enjoy this. Don’t come into these episode looking for great exposition and character depth, however, and certainly shy away from it if gore makes you the least bit queasy.

The striking animation is offered up in a beautiful transfer to Blu-ray Disc from Maiden Japan in AVC 1080p. The often dark and gritty looking OVAs don’t suffer much at all from the typical anime-on-video curse of banding and there are certainly no motion artifacts to be found that I could see.

The sound, albeit in stereo DTS-HD Master Audio Japanese-only, is masterfully ambient and atmospheric with lots of little sound effects spread across the two channels. Dialogue is crystal clear and the voice cast nail the characters well.

Only a few Maiden Japan trailers are included.

A series of OVAs bathed in blood and gore, Corpse Party: Tortured Souls is not for the faint of heart, but for those genre enthusiasts who like this sort of thing, it hits its mark. The Blu-ray release from maiden Japan looks and sounds good, but feels rather barebones with its lack of extras and limited number of episodes especially for its list price.