Cutie Honey Universe is the fifth animated project based on Nagai Go’s Cutie Honey manga franchise. The series follows Honey Kisaragi an android fitted with the Airborne Element Fixing Device, which allows her to transform into multipole battle forms, including the sexy battle droid Cutie Honey. When she’s not in her Catholic School as Honey Kisaragi surrounded by her pretty friends and other girls trying to bully her, Honey, as Cutie Honey, must do battle against the nefarious forces of mastermind Sister Jill and the group Panther Claw who want very much to steal the technology with her. Meanwhile, Sister Jill is also undercover as Inspector Genet infiltrating Honey’s inner circle.

The series is an ecchi, action/comedy series that offers up an abundance of fan service for those interested in that, but beyond those surface level things, there isn’t much to these twelve, rather disjointed episodes. While the character designs are certainly appealing and there’s plenty of detail and artwork for one’s eyes to be drawn to in this candy-colored world, the story is paper thin and the repetitive nature of Honey battling Panther Claw as they try to steal her technology becomes quite monotonous. There’s never any sustained sense of peril or suspense. It’s like an ecchi Dragon Ball without gleeful youthful enthusiasm of adolescence. 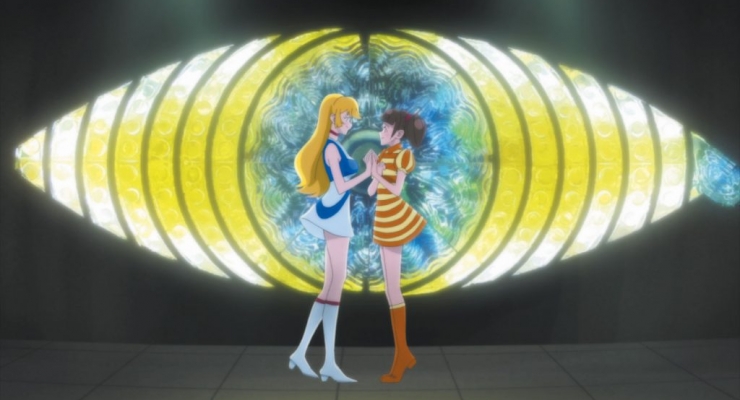 The series arrives on Blu-ray with an AVC 1080p encodement of its digital animation framed at 1.78:1. The image is colorful without being oversaturated, has excellent detail, is clean, and shows no signs of aliasing or motion artifacts. The line art is crisp and fills don’t show any video noise. This is a great looking disc that offers up the series in a statisfyng transfer.

Cutie Honey Universe comes to Blu-ray with both the original Japanese-language audio mix and an English dub, both encoded in DTS-HD Master Audio 2.0 stereo. The Japanese track sounds better overall because the dialogue is fuller and closer up in the mix, whereas the English dub places the dialogue a little too far back in the mix and the dialogue sounds a bit too thin. Apart from that, we get good stereo imaging and dynamics in both stereo mixes and both casts do a pretty decent job with this somewhat campy material.

There’s nothing much offered on the Cutie Honey Universe standard edition, only the usual clean animations and trailers. For the good collectibles, you’ll need to get the limited edition.

This collection had the potential to be a really fun ecchi series, but in the end it’s an eye-catching piece of anime with a few good action sequences, great eye candy, but nothing more beyond that.

3.2 / 5 TheaterByte Rating
{{ reviewsOverall }} / 5 User Rating (0 votes)
TV-MA (VS)TV Rating
Production ReedAnimation Studio
Sentai Filmworks (North America)Distributor
Yokoyama AkitoshiDirector
Takahashi NatsukoWriter
300 Mins.Run Time
23 Jul. 2019Release Date
$69.98MSRP
1.78:1Aspect Ratio
AVC 1080pVideo
Japanese DTS-HD MA 2.0 StereoAudio
English DTS-HD MA 2.0 StereoSecondary Audio
EnglishSubtitles
The Story
The Animation
The Video
The Audio
The Dub
The Supplements
Summary
Honey Kisaragi is an android who is an innocent Catholic schoolgirl much of the time, but she also possesses the Airborne Element Fixing Device that allows her to transform into the sexy battle droid Cutie Honey in order to battle against the nefarious forces of Panther Claw, who want to steal her technology. This ecchi comedy/action series is full of eye candy, action, and fan service, but there's not much of a story to keep one engaged.
What people say... Login to rate
Order by: