The young wizard who is meant to be the savior Harry Potter (Daniel Radcliffe) returns for his sixth year at Hogwarts in Harry Potter and the Half-Blood Prince, again directed by David Yates from J.K. Rowling’s YA fantasy novel. The burgeoning teen angst and hormonal energy that underpinned the darkness of the previous The Order of the Phoenix come more to the fore, giving Half-Blood Prince more of a split personality.

Now that the wizarding world is in full acceptance that Lord Voldemort has returned, neither the world of the muggles nor the magical world are safe place anymore. Not even Hogwarts, the academy that, in the earlier films was a safe haven of joy and childish magical tricks, is fully trusted by parents or wizards. The Death Eaters seem to have free rein, attacking establishment, clearing out places of work and casting a shadow over everything. Dumbledore (Michael Gambon) urgently tries to educate Harry in the history of Tom Riddle, the young magic student who would become Lord Voldemort, bringing on a new teacher, Horace Slughorn (Jim Broadbent) as a teacher of potions. Slughorn has had his own history with Riddle, but he seems less than anxious to share what he knows with Harry.

Meanwhile, as the anxiety level begins to rise in the magical world, so too does the young love in the air. A heady mixture of love potions and teenage awkwardness lead to petty rivalries, jealousies, and full on make out sessions in Hogwarts. While Ron and Hermione finally begin to realize they are meant for each other, so too to Ginny (Bonnie Wright) and Harry get hit by Cupid’s arrow.

During all of this, Harry has discovered an old textbook on potions that belonged to a student that called himself ‘The Half-Blood Prince’ and apart from having scribbled notes in it allowing Harry to formulate perfect potions beyond the abilities of all the other students, it is having deleterious effects on his psyche.

The two moods of Half-Blood Prince – one of the looming wizarding war growing ever closer and the mystery surrounding the past of Tom Riddle and the other a lighter one about the growing pains of teens navigating their awakening sexuality – never come together in this film to form a cohesive whole. That doesn’t keep Half-Blood Prince from being an enjoyable thrill ride, however, but it may make it a little confusing at times for those unfamiliar with the book. Since some of the plot lines seem to jump around inexplicably. The scenes with Dumble showing Harry his memories of Tom Riddle seemed edited in out of time, like some sort of fever dream that just skips around at will, then we end with a big showdown in the final act that is spectacular spectacle at best, but confusing at worst.

So, while the visuals and two moods of this film all work taken on their own, it could have been so much better if tightened up, especially given the much more cohesive film the preceded it and came after it. 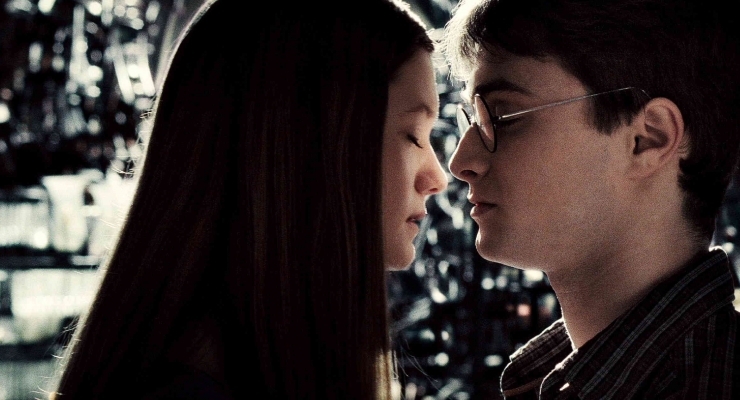 Harry Potter and the Half-Blood Prince was shot in the anamorphic, 2.40:1 format on Arricam LT and Arricam ST cameras with Cooke S4 and Angenieux Optimo lenses on 35mm Kodak Vision2 200T 5217 and Vision2 500T 5218 film stock. From what I can find a 2K DI (Digital Intermediate) was originally used for this and I haven’t been able to gather any information pertaining to Warner’s restoration, but it certainly looks like they have gone back and rescanned the original camera negatives and re-timed these films for a true, 4K, 12-bit Ultra HD experience. The HDR (utilizing HDR10) is magnificent, probably the best use of HDR on disc so far for a catalogue release. The dark, darks (there is some intentional crushing of blacks) mingle effortlessly with effects so bright they will make you squint. The flesh tones are completely natural and detail is crisp. This is a release that shows all the promise of what Ultra HD can do.

The DTS:X (compatible with DTS-HD Master Audio 7.1) mix on this Ultra HD Blu-ray is guaranteed to give your system a workout — whooshing sounds from above, voices that practically come from in your head, rain surrounding you, and low-end that thumps thunderously without becoming unwieldy. This, like the video, is the promise of the new object-oriented audio formats in general and DTS:X in particular. And it’s not all loud and in your face, there’s plenty of time for quiet and atmospheric sounds as well in this well-balanced mix.

The extras are numerous, but they are all extras that have been previously released.