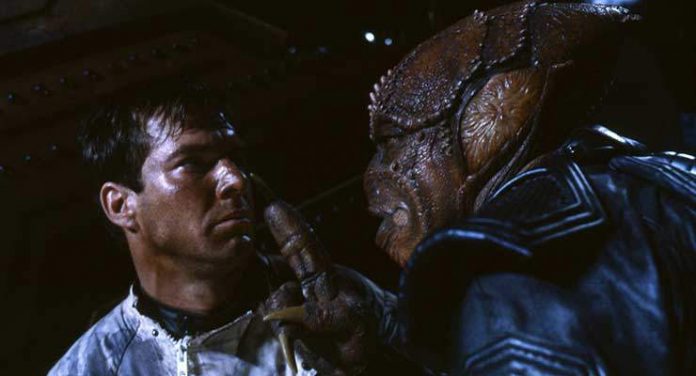 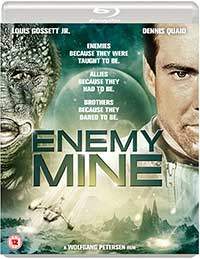 1985’s sci-fi adventure Enemy Mine was a box office flop for many reasons, not the least of which was the unoriginal story putting two enemies together where they must work together to survive. Director Wolfgang Petersen’s (who actually replaced Richard Loncraine after production ran into problems) film, based on the award-winning novella by Barry Longyear has often been compared to Robinson Crusoe on Mars (1964) and Hell in the Pacific (1968).

Set in the late 21st century when humans have united the Earth and set out into space, but encountered an alien species, the Dracs, that they have now been warring with, the story follows one intergalactic earth soldier, Davidge (Dennis Quaid) who crash lands on a distant and desolate planet along with the Drac

Jeriba Sherigan (Academy Award-winner Louis Gossett Jr, An Officer and a Gentleman). In order to survive the planet’s hostile environment filled with storms and floods, the two enemy soldiers must learn to cooperate with each other, and they eventually become allies and friends, even learning each other’s language. Jeriba, or “Jerry” as Davidge calls him, a unisex species, eventually gives birth and dies before the two can be rescued, and Davidge raises the child even as the war between the species continues on.

While there is nothing new at all in these themes of two opposing factions, races, or species being thrown together in circumstances that force them to put aside their differences and learn what makes them more alike than different in order to live, there is certainly to be said about the way Enemy Mine achieves its well-worn sci-fi trope. Its removal from anything remotely familiar to the earthbound makes it all the more about the characters and not drawing lines in the proverbial sand.

But the strongest parts of this film still remain in the production design that, while quaint and obvious allusions to the work of Gene Roddenberry and classic Star Trek episodes, really look excellent, especially when highlighted by the camerawork of Tony Imi. The film also gets two strong acting efforts from its leads, even Gossett who manages to emote from behind a very misguided reptilian mask.

The 2.35:1 AVC 1080p image of Enemy Mine looks stunning in this Eureka Classics Blu-ray release. Colors, especially primaries like reds and blues, really pop and the film grain is natural and crisp. We get a lot of texture and three-dimensionality in the nuanced image. Flesh tones look good and the beautiful production designs really standout.

Enemy Mine not only gets a serviceable LPCM 2.0 stereo track, but there is also a DTS-HD Master Audio 5.0 mix

that expands the soundscape. Don’t expect this 5.0 mix to be a heavily discrete one that has a really tight 360-degree soundfield, however. While it does have good balance and atmospherics, there is often a little hint of a reprocessed effect to the sound. That said, the low-end is pretty good for a mix without a LFE track and stereo imaging is good as well. There is just a slight bit of crackle in the louder sound effects, but dialogue is clean and intelligible.

The extras are thin on this release. Only one extended scene in SD is offered on disc and the booklet has ony an essay on the film, although it is a good one.

Enemy Mine is still not a great sci-fi film, but perhaps it is a worthy B-grade cult classic whose message of peace and coming together despite differences has found its moment. Eureka Entertainment’s Blu-ray release looks stunning, so anyone interested in this film would do well to pick up this edition.