Devils’ Line is based on the Japanese dark fantasy manga series written and illustrated by Hanada Ryo. Set in Tokyo, it is sort of a crime serial-cum-vampire romance that revolves around two main characters, the female college student Tsukasa and the half -‘devil’ or vampire Anzai.

When Anzai saves Tsukasa one night from a devil attack one night, he then becomes her protector. He works as a member of a secret part of the Tokyo police force, Division 5, that uses vampires to help fight devil-related crime, but Anzai is also fighting his own demons. A half-blooded demon himself, Anzai is fighting his natural urge to consume human blood for fear he will transform into the true devil form and lose control over his sense. During his time standing guard over Tsukasa, the two grow closer and romantically involved, but it also becomes increasingly more difficult for Anzai to control his urges and avoid consuming blood – especially of he wants to protect her at his full strength.

Devils’ Line doesn’t break much new ground as far as the whole vampire genre is concerned. Much of the tried and true tropes are visited in this series – the alluring, dark and mysterious vampire who blends in with humans but is tortured by his true nature, the innocent woman who is drawn to his darker side, the crusaders out to kill all the vampires – all of these are here in this series. The thing about Devils’ Line is it still manages to infuse some originality into its story arc. Even the fact that this is a world, a Tokyo, where vampires aren’t in the shadows, but known to the general public – something we’ve seen in series such as True Blood with more camp – is handled deftly.

And of course, Devils’ Line presents the story with a pretty tantalizing visual palette. The character designs are very detailed, from the dark circles around Anzai’s eyes to the monstrous look of the full-on, blood fed devils, it’s exactly the sort of horror artwork we’d expect to see in a series about vampires. 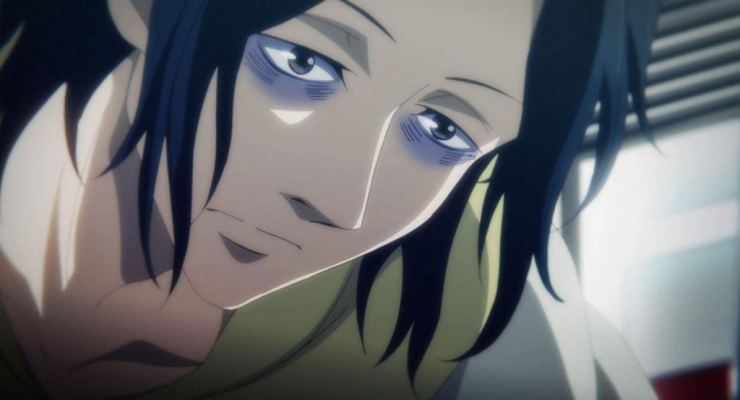 Devils’ Line comes in an AVC 1080p encodement on Blu-ray framed at 1.78:1. It offers up a satisfying look with good details, although much of it takes places in shadows, which in some spots do have the slightest hints of color banding.

The original Japanese-audio and an English dub are included in DTS-HD Master Audio 2.0 stereo. The mix has great stereo separation and dynamic range, a punchy midrange, and clean dialogue. The English places the dialogue a little bit too far up in the mix throwing it a little bit out of balance in comparison to the Japanese mix, but the cast does a good job also.

Only clean opening and closing dialogue are included in this standard release. There is also a collector’s edition release with more bonus features.

This is a solid series that may not be up to the level of other vampire anime such as Hellsing, for example, but is still an enjoyable dark fantasy.

Devils’ Line is out on Blu-ray & Collector’s Edition Blu-ray August 27, 2019 from Sentai Filmworks

3.6 / 5 TheaterByte Rating
{{ reviewsOverall }} / 5 User Rating (0 votes)
TV-MA (VSL)TV Rating
Platinum VisionAnimation Studio
Sentai FilmworksDistributor
Tokumoto YoshinobuDirector
Konuta Kenji | Hisao Ayumu |Writer
325 Mins.Run Time
27 August 2019Release Date
$69.98MSRP
1.78:1Aspect Ratio
AVC 1080pVideo
Japanese DTS-HD MA 2.0 StereoAudio
English DTS-HD MA 2.0 StereoSecondary Audio
EnglishSubtitles
The Story
The Animation
The Video
The Audio
The Dub
The Supplements
Summary
In a world where vampires can pass as normal humans, walk in daylight, and holy water has no effect on them, one half-breed vampire, Anzai, saves a female college student, Tsukasa, from a vampire attack and becomes her guardian. The two develop a close relationship, but Anzai, who is part of a secret government division to fight vampire-related crimes, struggles with his urge and vow to avoid consuming human blood as the two grow closer and the outside world puts pressures on their relationship in this dark fantasy/crime/romance. The series does does cover some common tropes of the genre but does them in an original way for a pleasing story presented in a solid HD release on Blu-ray from Sentai Filmworks.
What people say... Login to rate
Order by: