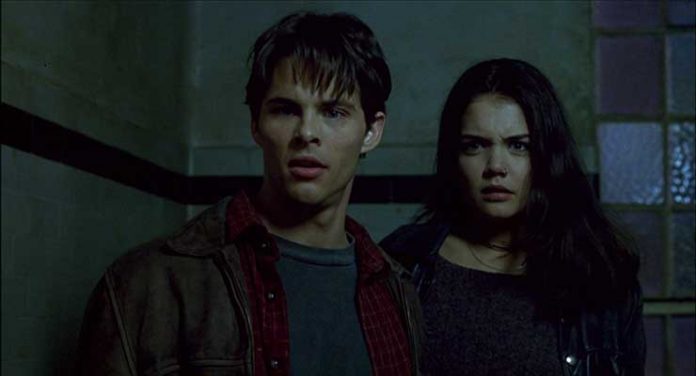 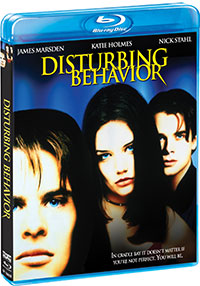 The X-Files’ producer and director David Nutter made his feature film directorial début in 1998 with the teen horror/thriller Disturbing Behavior. While it bares a passing resemblance to some of the one-off episodes of the X-Files  series in its strange dark world and unusual occurrences, its lack of depth, lack of focus, and absence of humor separate it from the far superior TV series and better teen horror films of the decade.

After a death in the family, The Clark family move from Chicago to Cradle Bay, where Steve Clark (James Marsden) finds himself being warned by local druggie Gavin Strick (Nick Stahl) about his new school and town’s cliques. The school has a strict hierarchy, and at the top sit the Blue Ribbons, a strangely perfect group of goody-two-shoes, seemingly perfect students who rule, often brutally. Sure enough, after a run-in with the Blue Ribbons, Gavin becomes one himself, and Steve begins to suspect that a conspiracy of some sort is at the heart of it. Local hottie Rachel Wagner (Katie Holmes) joins up with Steve to investigate exactly what’s going on, and the two begin to think that the school’s psychiatrist, Dr. Caldicott (Bruce Greenwood), may be responsible for brainwashing the students.

The lack of originality in screenwriter Scott Rosenberg’s screenplay is its downfall. The story is nothing more than a Stepford Wives derivative with elements of Children of the Damned and V, only with teens and far less subversive. David Nutter tries his best to add tension where there really is none by creating a dark, shadowy world, tight camera shots and first person camera angles, but ultimately Disturbing Behavior is one of the more forgettable teen horror efforts from the ‘90s.

Disturbing Behavior comes to Blu-ray from Scream Factory with a 1080p AVC encodement that, while it doesn’t look like it has undergone any sort of extensive and costly restoration, is acceptable for this sort of genre piece. There are incidents of dirt and sparkle that cop up, but for the most part the film’s 35mm source from a 1998 vintage looks organic and holds up well.

The audio mix, offered up in DTS-HD Master Audio 5.1 and 2.0, is a bit disappointing given the sort of film this is. While there are some mild sound effects placed in the surround channels and just a hint of low-end “oomph” atmospherics are a letdown and, overall, this one is a bit dry and front-heavy for a so-called horror film. Handling of dialogue is more than adequate, however.

The supplements included are not really required viewing. Almost 25-minutes of unnecessary deleted scenes in standard definition with optional director’s commentary and a feature-length audio commentary, also with the director, may be of interest to fans.

Disturbing Behavior is probably most memorable now for starring a young and gorgeous Katie Holmes in a role she’d probably love to forget about even more than her marriage to Tom Cruise. It looks stylish, but that’s the most it has going for it.