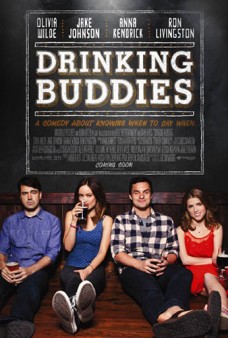 Directed and written by independent filmmaker and actor Joe Swanberg, Drinking Buddies revolves around the life of Kate (a charming and beautiful Olivia Wilde). This includes her work life at a Chicago brewery company and the relationships she has with her co-workers, including a very close one with Luke (a very good and very natural Jake Johnson). Kate and Luke have great chemistry between them. It could be sexual chemistry, a will they or won’t they scenario, or it could be that their chemistry makes them as close as brother and sister. They spend lots of time together, lots, at work, more time after work spent drinking (what else) beer, and some weekends as well.

Kate actually does have a boyfriend, Chris (the good looking Ron Livingston), a finance type clean cut kind of guy with a good job and a nice home, who leads a very structured and orderly life, opposite to the free spirited Kate. Luke is also in a relationship, with Jill (Anna Kendrick), a relationship that is heading towards marriage. But it appears that Kate and Luke make the better pair, they have a good time at work together, enjoy each other’s company, and make each other laugh. They are very compatible and very close that they seem perfect for each other. When both couples go away on a weekend trip to a cabin in the mountains, and when Jill and Chris find themselves kissing after taking a hike together, will both couple’s relationships survive the weekend?

Swanberg has directed and written such a simple, believable film about a woman who doesn’t realize how beautiful she is, and who is happy with whatever life has in store for her. Drinking Buddies is a small but very charming film, one that could’ve slipped through at the movie theatres. Wilde (who was last seen on the big screen in Rush and who was in television’s long running series House) makes the movie her own. Her girl next door attitude and warm personality makes for a great lead character. Wilde is such a natural in the role. Jake Johnson as Luke is the male version of Kate. He is also very simple, happy, and loveable, with his unshaven beard and a slightly pouchy stomach. Kendrick and Livingstone are also both very good in their roles as their other halves. Drinking Buddies is an excellent effort from Swanberg, whose previous features have been unrecognized and unnoticed (this includes such under the radar films as 2012’s VHS and over 20 others). Swanberg is also an actor, and he cast himself in Drinking Buddies in a role that has him billed as ‘Angry Car Guy.’ Drinking Buddies will put Swanberg on the map of directors/screenwriters to look out for. His next effort is a film called 24 Exposures, to be released in January 2014, a steamy film about fetish photography. But Drinking Buddies is one of those films that you can watch on DVD with either your other half or a handful of friends, or perhaps both, it is a very enjoyable film. Well done Joe.