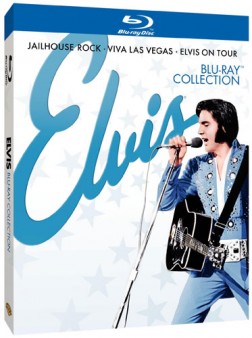 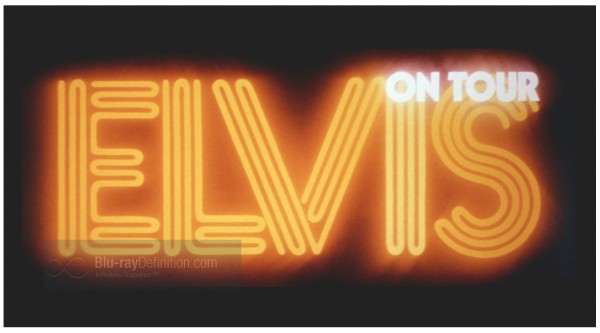 This three-disc collection includes the Elvis classics, Viva Las Vegas, Jailhouse Rock and the Golden Globe winner, Elvis on Tour. As for the other two, though the settings are different (Elvis as ex-con vs. Elvis the race car driver), the story is pretty much the same; in the middle of whatever Elvis happens to be doing, he meets a stunning woman, she puts up a fuss initially but eventually falls victim to his charms and in the end, he gets the girl.

Elvis on Tour covers vignettes of Presley’s 15-date tour in April of 1972, along with a few minutes of Presley’s early career sprinkled in to the mix at about 25 minutes.  Total running time is 93 minutes and there is no bonus footage or outtakes.

Your love for Elvis will determine whether you want to part with the green for this one.  Presley’s performance in his ’68 Comeback Special showcased the King at his finest, but here is slowly sliding down the path to the bloated Elvis featured in Aloha From Hawaii. We don’t get a chance to see any songs performed start to finish, but there is a wide range of Presley’s style presented, from full on rockabilly to gospel, all clad in his trademark cape and jumpsuit.

While many will gravitate to the concert footage, the best footage here is behind the scenes, when Presley is interacting with the people in his band.  It really shows off the kind side of his personality, and the amount of respect that those working had for him.

Both of the Elvis movies are presented in pristine quality.  Viva Las Vegas has bright, almost over saturated color for the period, everyone looks like they’ve had a bit too much sun.  (Perhaps back down the saturation on our set a little…) Jailhouse Rock, is black and white, with good midtones and rich blacks.   Elvis on Tour stays true to the early 70’s feel, looking as if most of the footage was shot with precious more than a 16mm camera; and perhaps that adds to the feel.  Color balance is all over the map and there’s lots of film grain, so Shine a Light, this isn’t,  (though Martin Scorsese does produce the cool multi-scene montage sequences in this film).  Shot in 16:9, 2.41 format, Elvis on Tour bounces between full screen (left to right) to about ¾ screen depending on the quality of the source footage.

Though this one is offered in multichannel DTS-HD Master Audio format, it actually sounds best in standard 2.1, again, perhaps keeping more in tune with the age.  The original VHS tape had marginal sound quality to begin with, and while the Blu-ray sounds better, this will not be mistaken for an audiophile classic, due to a limited dynamic range. At the end of the day, the high fun factor of the movie more than makes up for it — hell, it’s Elvis!  Both Viva and Jailhouse have a relatively thin, but clean mix.  These were pretty minimal soundtracks to begin with, and nothing has been embellished.

Not much here in terms of extras, because back in the 60’s they didn’t produce director’s cuts and alternate endings.  Each movie includes the theatrical trailers and you can access commentary from entertainment journalist Steve Pond.  Personally, I found this pretty boring, listening to someone blather over the movie with their sorted opinions, but a good friend who is a mega Elvis fan found this riveting.

Elvis Presley’s charm is pretty tough to resist.  If you are even the slightest bit of a fan, Elvis: Blu-ray Collection should make an excellent addition to the vintage section of your music and movie library.