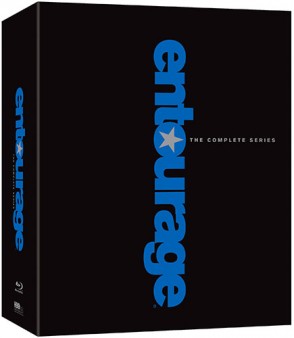 Entourage, one of the biggest series to ever hit the HBO network, tells the stories of Vincent Chase (Adrian Grenier), Eric (Kevin Connolly), Drama (Kevin Dillion) and Turtle (Jerry Ferrara), as they deal with Vince’s sudden rise to fame as a hot, young Hollywood actor. Loosely based on the rise of Producer Mark Wahlberg, the first few seasons find Vince and his pals adjusting to his new career by doing anything four young guys would do. Drink, flirt, spend money, and just party. All this while trying to figure out exactly what the Hollywood life offers them. After the midway point of the series (say Season 4), the show begins experimenting with more of a serious tone including the subjects of drug use, reckless spending, as well as Vince and his downfall from fame – only to rise up again thanks to a few great people in his life (like agent of Ari Gold (Jeremy Piven).

Along the way, we meet Ari Gold, Vince’s on and off agent throughout the series. Piven’s Ari is one of the best aspects and (really) makes the series worth watching from episode to episode, season to season. It’s not that the antics of Vince and his boys aren’t entertaining, it’s just after awhile, we just feel as if we’ve seen this before. Ari, on the other hand, is hilarious. He is constantly mad, one can assume at his unrelenting search for unlimited power to feed his huge ego. It’s this endless quest to be the top agent in Hollywood that drives him to sign anyone, from T.I. to Sara Silverman, to Jessica Alba (all of whom make appearances).

Speaking of stars, another enjoyable part of each episode is seeing just which celebrity will appear. While the list is wide ranging, from past celebs to current, hands down the best cameo has to be Matt Damon’s in Season 6. While I won’t give away his exact participation, I will say “Sorry, bro – He Bourned me.” says it all. Truly hilarious.

Simply put, HBO’s Entourage is purely entertaining and just a whole heck of fun. It’s one of those series that you can easily watch multiple episodes back to back without realizing you have. That, my friends, is the definition of a well made show.

Each season of Entourage arrives with its own 1:78:1 framed, AVC MPEG-4 encoded transfer. Do note each season is spread over 2 discs, with each disc roughly holding 4-5 episodes. Showcasing the Hollywood landscapes in all its glory, the series’ color palette has always had a kind of bright, hot look and feel to it. Despite this, the transfer holds a good amount of detail. Flesh tones, contrast levels and facial close-ups are excellent. Texture detail also is quite impressive. Blacks are deep and inky, with no instance of crush.  All in all, this is a fine effort from HBO.

Each season has been awarded its own DTS-HD Master Audio 5.1 offering. Dialogue is well reproduced throughout with no instance of dropout. Atmosphere, depending on the scene, can vary from quite active (during the highway driving where background cars, noise can be heard) to rather quite (some of the house chats). Musical selections do open up the sound field more adding in a good amount of LFE and surround activity. Pans between rears are invisible as well. Given HBO’s track record, this is another solid effort from them.

The supplements provided on this release are broken down by each disc. Do note, there are really no ‘NEW’ features here. Rather, everything has been ported over from the prior DVD/Blu-ray releases:

HBO’s hit series has finally arrived on Blu-ray, with all its seasons intact. Like their prior Blu-ray releases, the V/A presentations are solid, and the features (while offering nothing new) are ported over. A set like this, for a fan of the series, is an absolute no brainer purchase.

Purchase Entourage: The Complete Series on Blu-ray at CD Universe

Purchase Entourage: The Complete Series on Blu-ray at CD Universe