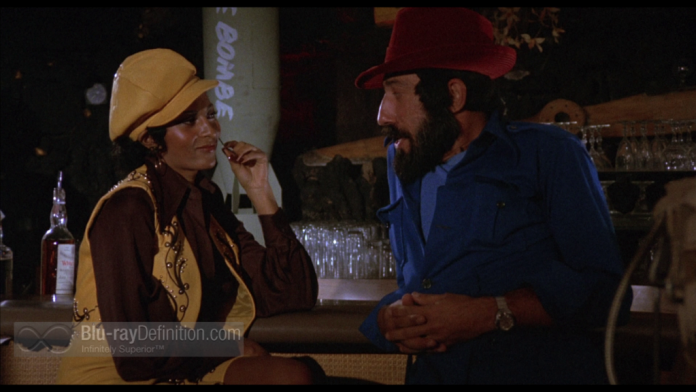 Jack Hill (Spider Baby, Coffy) may not have invented the phrase “Blaxploitation”, but he certainly directed one of the most iconic films of the genre with his 1974 film Foxy Brown. Starring Pam Grier in the titular role as a badass black woman in fancy threads on a single-minded trail of revenge against her evil white foes, the film would inspire Quentin Tarantino, who would cast Grier in his 90s homage Jackie Brown, and to go on to create his own tale of female revenge, Kill Bill.

A very non-politically correct ’70s story full of crime, car chases, the “N” word, and even a lesbian bar brawl, just for good measure, the story follows Foxy Brown who goes undercover at a high end prostitution ring posing as a modeling agency to get at the people responsible for killing her undercover lawman boyfriend. It sends her on a harrowing journey that leads to her being kidnapped, sexually assaulted, and eventually teaming up with a group of militant, Black Panther types to bring down the agency, who also has their hands in the neighborhood drug trade.

With its funky soundtrack, balance of sexy scenes, and kick-butt kung fu action sequences, all while Grier, as gorgeous Foxy, dons some flashy 70s outfits and the era’s iconic afro wig, Foxy Brown is a quintessential ’70s Blaxploitation genre flick.

The 1.85:1 framed AVC/MPEG-4 1080p encodement from Arrow is film-like, but it suffers from film softness a bit of noise and occasional hints of source damage. Darker areas tend to settle into graininess and lose a bit of detail, but close-ups and brighter sequences can look quite clean and crisp, with lots of texture, and a subtler grain structure.

An English LPCM 2.0 mono (48kHz/16-bit) soundtrack is supplied that offers clean dialogue and a punchy midrange for the funky soul soundtrack that accompanies the action sequences. There are sufficient dynamics and little crackle.

This is a feature-rich set from Arrow that comes with a few featurettes, an audio commentary, and the usual informative booklet and reversible sleeve with original and newly commissioned artwork. There is also a steelbook edition available.

Along with Black Caesar, Shaft, and Superfly, Foxy Brown probably stands out as one of the most iconic films of the ’70s Blaxploitation genre, and rightly so. This isn’t Oscar material, this is outrageous, over-the-top, and, at the time, controversial. It arrives in a solid, feature-rich package from Arrow for all genre connoisseurs.

3.5 / 5 TheaterByte Rating
{{ reviewsOverall }} / 5 User Rating (0 votes)
UK: 18Rating Certificate
Arrow Films | MVD Entertainment GroupStudios & Distributors
Jack HillDirector
Jack HillWriter
92 Mins.Run Time
£22.99MSRP
24 Jun. 2013Release Date
1.85:1Aspect Ratio
AVC 1080pVideo
English LPCM 2.0 MonoAudio
English SDHSubtitles
The Creative Content
The Video
The Audio
The Supplements
Summary
Along with Black Caesar, Shaft, and Superfly, Foxy Brown probably stands out as one of the most iconic films of the '70s Blaxploitation genre, and rightly so. This isn't Oscar material, this is outrageous, over-the-top, and, at the time, controversial. It arrives in a solid, feature-rich package from Arrow for all genre connoisseurs.
What people say... Login to rate
Order by: