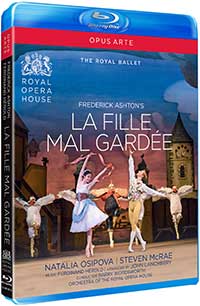 One of the earliest ballets to achieve international repertory status, La Fille Mal Gardée (The Wayward Daughter), has been choreographed by some of history’s best dance designers since its 1789 Paris début. This May 2015 production revives Frederick Ashton’s adaptation with John Lanchberry’s re-orchestration of Ferdinand Hérold’s rather lightweight score augmented with melodies by Rossini and Spohr among others.

Two young lovers, Lise (Natalia Osipova) and Colas (Stephen McRae), want to get married but Lise’s mother, the Widow Simone (Philip Mosley), sees a better match with the simple-minded (and umbrella-carrying) Alain (Paul Kay) whose father is the wealthy vineyard owner Thomas (Christopher Saunders). Lise and Colas try to keep their relationship going, but the Widow continues to place obstacles in their pathway. Shortly before the marriage contract between Lise and Alain is to be finalized, the Widow orders Lise to put on her wedding dress and locks her in the bedroom to keep her away from Colas, not realizing that young man is already hiding there. Thomas and Alain arrive with a public notary in tow. When the bedroom door opens and Colas is discovered with Lise, an enraged Thomas tears up the marriage contract and drags the befuddled Alain off with him.  Lise and Colas convince the Widow to take up their cause and she agrees to support their marriage. A happy ending follows for all including Alain who returns to pick up his beloved umbrella that he inadvertently left in the preceding chaos.

The Royal Ballet Company literally owns this Ashton production. Maestro Barry Wordsworth leads a spirited performance from the pit with careful attention to the various dance tempi. The principal dancers, Osipova, McRae, Kay, and Mosley, deliver superb accounts of their solos and receive sympathetic support from the corps de ballet. The comedic touches are deftly rendered and, from the facial expressions and body language of the cast, it seems that a great time was had by all on stage.

As noted in my earlier reviews of his Royal Ballet videos, director Ross MacGibbon, a former dancer himself, gets his camera crew to convey the “being-there” sense of the dance. The colors of the rustic costumes and the stylized bucolic sets are superb. Details are flawless.

There is excellent orchestral ambience in the surround-channel version with clear recovery of instrumental solos (there are plenty in this score). Stage noise is unavoidable in ballet but is relatively unobtrusive here.

A program booklet offers cast and production credits, a background essay by David Vaughn, and a synopsis of the plot (I did miss a listing of the dance numbers). Video extras include the following: 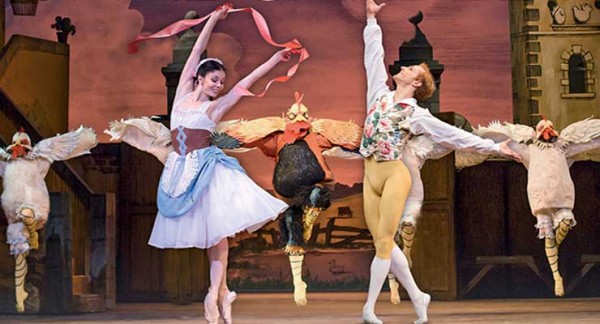 This is one instance where the Royal Ballet provides its own Blu-ray competition.  A 2009 release features the superb coupling of Marianela Nunez and Carlos Acosta in the principal roles. While the Ashton choreography is basically the same in both productions, there are stylistic differences between the two pairs: Acosta and Nunez being the more physical while Osipova and McRae the more refined. Even if you own the earlier Covent Garden disc, this one offers a different take that is equally enjoyable. Highly recommended.