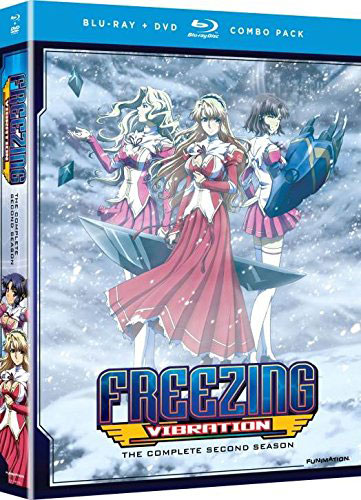 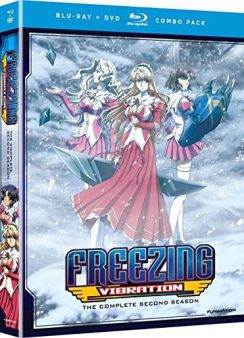 The beautiful, eye-catching sci-fi action series Freezing returns for a second outing with this superior second season, Freezing Vibration (フリージング ヴァイブレーション). Fans of fan service will be happy to know that the series stays true to its roots by providing plenty of sexy, scantily clad and nude action from its bevy of lovable, badass babes, but also expands the story somewhat, weaving a bit more of a concise and involving plot that is less repetitive than before and more fixated on conspiracies and paranoia over ‘Big Brother’ doing bad things.

With fewer and fewer women being born with a natural compatibility for becoming Pandora to fight the alien invaders known as Nova, the military approves a covert operation by Chevalier organization to develop artificial Pandora, E-Pandora, using data from the natural-born Pandora women. Shipped off to Alaska to the Chevalier facilities to help the organization attain data they need to improve the E-Pandoras, our group of buxom Pandora cadets, including Satellizer el Bridget and her male partner Aoi Kazuya, Rana, and Elizabeth Mably, arrive to help all they can. But there they find more than they bargained for when the program turns out to not only be going poorly, but to also be not what Chevalier claimed it to be.

This second season of Freezing Vibration is stronger than its first for focusing less on the obvious draw, the gorgeous characters and ample fan service, and a bit more on a slowly unfolding government conspiracy that draws in all of the familiar characters of the series, and some new ones. Adding to the show are new complications borne out of a new relationship between strong willed E-Pandora Amelia and Elizabeth Mably and a twisted backstory involving Satellizer and her half-brother that explains why she is “untouchable”. Unfortunately, this storyline seems to be not fleshed out properly. Satellizer is confronted by her half-brother and it revives some very traumatic memories for her, but it all resolves too neatly. All seems forgiven in the end, whereas, given the nature of their relationship, it just doesn’t seem possible at all.

At the end of the day, although Freezing Vibration felt more cohesive in its arc, although I will grant that some may find the somewhat less action intensive series a miss, it still doesn’t go too far in reaching out to those beyond the usual base of fan service and ecchi lovers who will eat this sort of material up. Frankly, it’s a beautiful series, not just because of the well endowed female characters, but the animation is superb all around, including the detailed backgrounds, marvelous costumes and the graphic action sequences. It should be given a chance, whether you think ‘fan service’ is your thing or not.

The animation in Freezing Vibration is beautiful, but the 1080p AVC encodement on Blu-ray from FUNimation is only average at best. There’s a lot of visible noise that is perhaps an artistic choice, but combined with a soft look to the visuals and some washout in the colors, the image doesn’t really ‘pop’. That said, Freezing Vibration does look better in full motion than it does in the still screen captures.

The original Japanese-language track is included in Dolby TrueHD 2.0 stereo as well as an English dub in Dolby TrueHD 5.1. Neither track seems to have much headroom as far as dynamic range is concerned and they are, as is often the case with FUNimation audio tracks, mastered to very low levels. I had the volume up about 6 db louder than usual to get nominal levels for both the stereo and 5.1 mixes. The 5.1 English mix is not much to write home about, in my opinion. While it does expand the soundstage a bit and place some mild effects in the surround channels, it lacks impact. The stereo mix is good, but the restrained range also damages its impact and sense of stereo imagery. The Japanese cast and dialogue is the superior choice here, but dub fans won’t be too let down by English voice performances.

If you’re really looking for your fan service and ecchi fix, then the OVA episodes included here are what you’ll want to be viewing.

The first season of Freezing was just starting to get good when it ended. This second season seemed to be on the right track from the get go, but even though it was a stronger season, it never really reached a boiling point. It remained just a little too even keeled for an action series, keeping the bulk of the fireworks for the last two or three episodes. That said, I found myself much more interested in what was going to happen this time around and still entertained by the imagery.