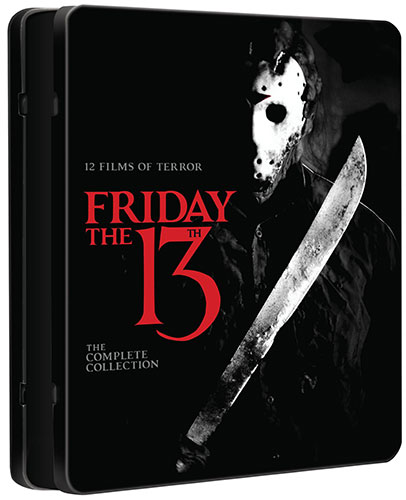 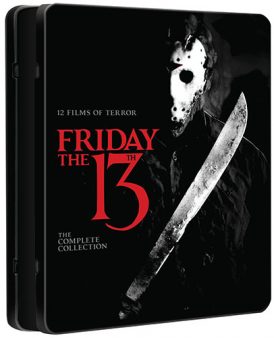 This “complete” Friday the 13th collection on Blu-ray brings together all 12 of the films for this unkillable slasher/horror franchise that got its start way back in 1980. Fans may be wondering how 12 films are squeezed onto only 9 Blu-ray Discs, well, the answer is obvious. A few of the films are included as double-feature discs. Part V and VI, VII and VIII, and Jason Goes to Hell and Jason Takes Manhattan are doubled up. There’s been no remastering/restoration done on any of the titles that have been previously released, and all of the on-disc extras on those discs remain identical.

As for the films, I have to say, the ongoing success of this franchise has always perplexed me. From the very first film which was on obvious jump onto the Halloween bandwagon, through the numerous sequels, “Final Chapters” and inevitable continuations, when you’ve seen one, you’ve pretty much seen them all – with little exception. Jason X, is a really bad, futuristic, sci-fi entry that places Jason Voorhees in the mid 21st on a spaceship, awoken from a cryogenic sleep and, of course, the inevitable ensues. Yeah, it’s that weird and, umm, what? Jason Takes Manhattan spends most of its time on a ship with the requisite attractive teens from Crystal Lake, recently graduated form high school, heading to Manhattan as the killer hitches a ride towards the Big Apple, killing, stalking, and eventually ending up ion the subway in what looks like a pretty cliché version of New York City – grimy, rat infested, and heroin junkies hanging out in allies next to muck-filled barrels. Nah, I’ve lived in the city my whole life and I’ve never seen that. Jason Goes to Hell, one of the numerous “final” installments, begins with a big, S.W.A.T.-style sting where they blow Jason up, but of course, he can’t die. His heart lives on, and he keeps bouncing from body-to-body in search of the one person who can kill him – his last living blood relative – with a bounty hunter on his trail. Mostly, however, the films stick to the script. A group of attractive teens just can’t stay away from Camp Crystal Lake (AKA “Camp Blood), and Jason slays them all with his machete, or, you know, whatever he happens to have on hand. The 2009 reboot, which stars Jared Padalecki from TV’s Supernatural stays close to this, but saps all the camp out of it, working in a subplot wherein he searches for his sister who went missing in the area months earlier. It feels too much like its trying to be Saw trying to be Friday the 13th.

On the whole, the collection may be of good value for those who haven purchased many of the individual releases, or those who need the previously unreleased films in the set alongside the rest. It comes in a beautiful collectible tin with the discs in a hardcover book with individual slipcases for each disc. The collectible swag, an iron-on patch and booklet might be enough to tempt some into the purchase. For others, taking a pass may be best and picking up the individual releases may be better, especially since they haven’t even bothered to go the distance and convert Friday the 13th Part 3 to stereoscopic 3D, and have kept it in this cheap, anaglyphic 3D format, cheap glasses included to boot.

For looks at Friday the 13th parts 1 & 2, see the full reviews of those titles previously posted on our site. The screen captures contained in this review are from all the other films.

The final three films in this never-ending franchise do the heavy lifting on the picture quality for this entire collection. It’s a very slow progression from the first film in 1980 to the latest one from 2009 to something really presentable. The earlier material looks very soft and noisy with flesh tones that aren’t always entirely accurate and lots of noticeable source damage still present. It isn’t until we get to Part V that things start to pick up just a bit, but they still don’t look fantastic. Jason X is where it really takes a turn for the better and begins to look like reference material. Freddy vs. Jason has a very crisp and filmic appearance that can show off the best of any display with its Super 35 film source, while the even newer 2009 Friday the 13th reboot looks so clean and offers such inky blacks it’s almost like an HD production.

The older titles all offer lossless 5.1 mixes, some include the original monaural and some don’t. The 5.1 tracks for the ’80s and 90s films don’t really sound very good, with edgy high frequencies and rather unnatural use of surround effects. When we get to Jason Goes to Hell, things sound a lot better, but this particular mix is very boomy, with the LFE sounding out of balance. From Jason X on, however, we get very fine, reference quality sound, culminating, once again, in a fine effort with the 2009 reboot. It’s really a toss up between Freddy vs. Jason and the former, however, but Freddy vs. Jason may lose by a hair since there is some slightly audible clipping on dialogue during some of the very loudest passages.

Much of the material you’re getting in this set has been previously released and, in fact, the Killer Bonus DVD itself repeats some material that is spread across some of the Blu-ray Discs. A booklet with little new insight is included, but it is a nice collectible for fans as are the iron-on patch.

Friday the 13th: The Final Chapter:

Arriving just ahead of the forthcoming Halloween holiday season, this unstoppable slasher franchise arrives in a complete collection that would make a good gift for the hardcore completist, but there isn’t much new here, the picture quality isn’t spectacular for most of the films and neither is the sound. Still, if you haven’t bought up the previously available releases, this may the set for you.