Galaxy Angel is a multi-platform project for anime, manga, and dating sim by Broccoli. The first anime series was directed by Asaka Morio (Sword Art Online, Gunslinger Girl, Chobits) and features animation from Madhouse (Black Lagoon, Death Note). It’s a sci-fi bishōjo comedy that is similar in visual style to Asaka’s Chobits, only not quite as coherent. Despite this flaw, it has had four more sequels since this 2001 24-episode début.

The crux of the story is about Sakuraba Mifeuelle who becomes the newest member of the Angel Brigade, an all-female branch of the Transvaal Empire military who are tasked with searching for so-called relics known as “Lost Technology”. The Angel Brigade are made up of the aforementioned Sakuraba, the extremely lucky 17-year-old girl whose luck is tempered by periods of bad luck; Mint Blancmanche a blue-haired mind reader wit rabbit ears who can be extremely selfish at times; Ranpha Franboise, a blonde beauty fond of wearing a red Chinese dress who is supernaturally strong and obsessed with finding a rich man to marry; Forte Stollen, an almost manly, militaristic woman with red hair, a strong belief in using force to get her point across whose hobby is collecting guns and lastly Vanilla H, a quiet green-haired girl with fervent religious beliefs and strange healing powers.

The girls carry out their mission to find the Lost Technology, but, well, no one actually knows what the Lost Technology is, so naturally this leads to more than a bit of fumbling, bumbling, and the blind leading the blind, so to speak. They go planet to planet on practically aimless missions and do their best to get into their own ways. From episode 1 where the angels find themselves doing menial housework to an episode where Forte and Ranpha end up on a casino planet wrestling their way out of gambling debt until Ranpha’s good luck finally kicks in and literally wipes it out, cosmically, this series is all over the place as far as stories go.

Given the chaotic storytelling and at times too fast to take a breath pacing, Galaxy Angel can be a bit hard to follow, it’s almost like a schizo version of Sailor Moon, without the maho shojo elements, of course. It’s visually cool to look at, tt has a colorful, early 2000’s sort of kawaii/moe anime style that is appealing, but perhaps this series was meant for being taken in small doses and not binged on like I had to, because I just couldn’t sit through it for long lengths without tiring of the overused gags and lack of a strict story arc. That’s not to say it was all bad, on the contrary. The interaction between the members of Brigade and the often outrageous situations they found themselves in was certainly funny, but, it’s as I said, it has to be taken in small doses. 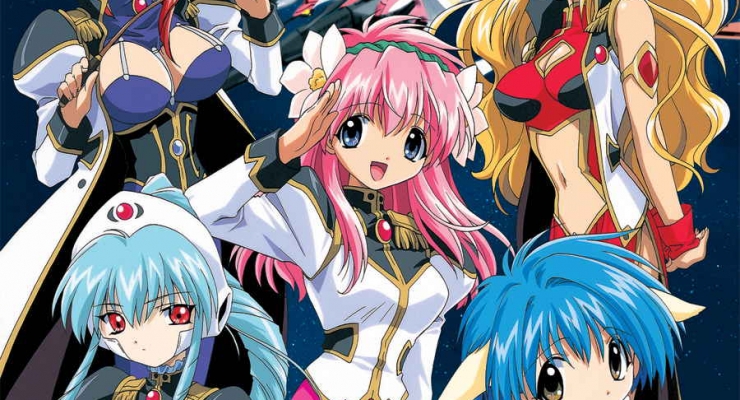 This 1.33:1 framed AVC 1080i encodement of Galaxy Angel is pretty obviously upscaled from a standard definition original source, so we don’t get a true high-definition image on Blu-ray and we can see a lot of issues like stairstepping around edges and what is ultimately an image that is not as clean and crisp as it would have been otherwise. The only benefit to having this on Blu-ray and not DVD is that the bandwidth is wider and the compression scheme better, so the picture will be a step up from DVD because of that. Benefits of it being upscaled are arguable at best, and if you have an HD display either it or your upscaling DVD player would be upscaling the image anyway.

LPCM 2.0 stereo mixes of both the original Japanese-language track and an English dub are included. I wouldn’t say the audio for either version is astounding, but it suffices. The dynamics aren’t great and neither is the stereo imagery. Given the messiness of this series to begin with, it’s hard for me to even make a judgment on preference for the original language or the dub. I lean toward the Japanese, because the English dub still seems to have certain “Saturday morning cartoon” quality that just seems to creep into all too many English anime dubs and, after all, it’s my opinion, and I make no secret of it, that all creative works should be watched in their original language, animated or otherwise. I mean, I would never watch Rififi dubbed into English, so why would I watch even this relatively minor work in comparison dubbed into English? That said, for those dub fans and for those who don’t care either way take your pick here. I will mention that the character of Forte Stollen, voiced by Yamaguchi Mayumi in Japanese really sounded too masculine to me. While some may find this in keeping with the “butchiness” of Forte, I found it to be off-putting with the visually “feminine masculinity” of the character. I think Alison Matthews’ voice in English was a more natural fit with what was presented visually anyway.

We get mostly the usual array of extras on this two-disc set. The relationship chart is cool and the GA Lectures. It’s also nice to see the Character Bios included on disc since there is no booklet

Hard to believe it’s 16 years since this series hit. Galaxy Angel has its fans for sure, and they will appreciate this set from Nozomi Entertainment. The video quality doesn’t meet the standards of today’s HD sourced productions, but it is still step-up from DVD.