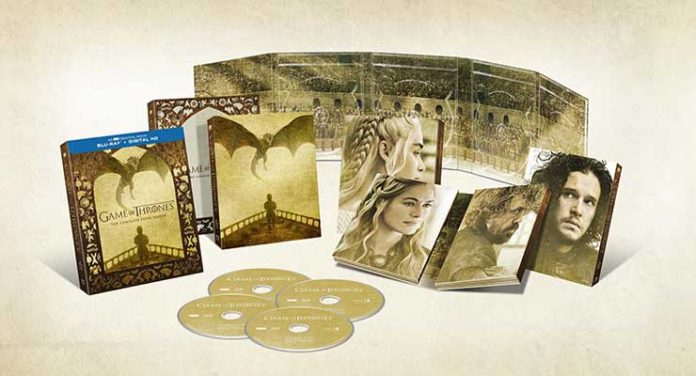 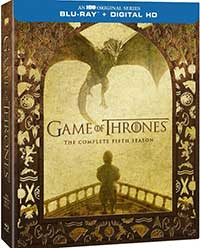 Season Five of HBO’s adaptation of George R.R. Martin’s fantasy drama Game of Thrones may have been its most shocking yet. The season starts off with the shifting battle lines and power vacuum left by Tyrion’s (Peter Dinklage) patricide of Tywin (Charles Dance). In King’s Landing, a fanatical religious cult led by the eccentric High Sparrow gains a foothold on power while Cersei’s (Lena Headey) hold begins to slip. Tyrion, meanwhile, is a fugitive on a journey across the Narrow Sea with an unexpected traveling companion in Varys (Conleth Hill), trying to start a new life and take on a new task. Arya (Maisie Williams) is finding new strength in an old acquaintance’s strange mystic tutelage, and Daenareys Targaryen (Emilia Clarke) struggles to keep her conquered city of Meereen from erupting in violence as the former slavers begin to push back against her freed slaves. And Jon Snow is in a battle of his own at Castle Black keeping the loyalty of his men together as he tries to appease Stanis Baratheon by persuading the wildlings to fight under his banner. OF course, this is also the season that gave us the shocking “shame…shame…shame..” episode involving Cersei’s punishment by the High Sparrow for her crimes of immorality. And anyone who knows anything about GOT also knows that the season left us with a cliffhanger about Jon Snow that is probably the worst kept secret in television history.

In all, season five was a fantastic season of Game of Thrones, probably one of the best, if not the best, since its first season, with lots of machinations, character growth, and stunning plots twists. For anyone who hasn’t read the books (and I include myself) a lot of this may be completely unexpected, although my research tells me that the series has really diverged a lot from the books now. Who knows where it will go from here since Martin has yet to complete the series of books, but the TV series continues

Game of Thrones is shot in HD and brought to Blu-ray in an AVC 1080p encodement by HBO. This series has always had a really filmic quality and season five continues that trend, whether it is the cold, greys of the Night’s Watch or the warm, glowing earth tones of Meereen, we get a clean and pleasing transfer with sharp textures, nuanced shadows, and an organic appearance even though it was shot in the digital realm.

Season Five of Game of Thrones is now the third season of the series to be released with a Dolby Atmos soundtrack on Blu-ray (seasons one and two were reissued in special edition steelbook editions with Atmos remixes). The Atmos mix is fantastic, although this series has always has great sound. The series used to have fantastic DTS-HD Master Audio 5.1 sound that was atmospheric and dynamic. The 7.1 Dolby TrueHD version of the remixed seasons one and two sounded great on my equipment before I upgraded to Atmos-enabled gear. Now it is at a new level. When Tyrion is released from the wooden crate he is riding in across the Narrow sea, you are really surrounded by the sound of that crate being pried open, it’s like you’re inside Tyrion’s head. Rain falls from overhead and all around. As always, the dialogue is clear and full.

Games of Thrones: Season 5 comes packed with extras as usual. The Histories & Lore extras continue as characters regale us with tales of the mythology of Westeros, The In-Episode guide that has graced all earlier seasons on Blu-ray is continues as well, as well as many other extras including 12 audio commentaries and more.

Game of Thrones: The Complete Fifth Season is a beyond enjoyable watch on Blu-ray from the incredible writing of the season to the quality of the audio and video on this feature-packed Blu-ray release.