This is the 2017 live action remake of the classic anime feature film that was based itself on the innovative cyberpunk manga by Masamune Shirow. There was much controversy made over the casting for Ghost in the Shell. With Scarlett Johansson taking on the role of Kusangi Matoko and Pilou Asbæk playing her partner Batou, many saw this as yet another instance of Hollywood ‘white washing’. Whether you agree with that or not, the bigger issue with this film is the fact that, it just isn’t that good.

As a longtime fan of the Ghost in the Shell franchise, I was skeptical about Hollywood getting their hands on it and making a live action version that was any good. My skepticism was not without call for. This film from director Rupert Sanders, who only has one other feature-length film to his credit, 2012’s Snow White and the Huntsman, comes across like a weird, alternate universe version of the original anime feature film where many of the events are the same, but the details are slightly altered.

In this 2017 version of Ghost in the Shell, they’ve opted to create what amounts to an origin story for Kusanagi, AKA Major (Johansson), beginning with her brain being implanted in a cybernetic body, but the memories of her past are somewhat blurry. She needs to find out. The military contractor responsible for the experimental tech that went into her body has her assigned to the government’s Section 9 cyber crimes fighting unit. There she is partnered with Batou (Asbæk). They soon find themselves fighting a mysterious hacker named Kuze (Michael Pitt) who is capable of hacking into people’s cybernetic implants and taking control of their “ghosts” or consciousness. In the original film, this hacker was known as “The Puppet Master” and the backstory was much different from where the story goes in this live action remake.

This film’s biggest weakness, apart from a lack of originality is that it misses the philosophical element that is what made Ghost in the Shell so successful. There’s plenty of mention of one’s ‘ghost’ or conscientiousness inside ever-growing, technologically enhanced bodies, but there is no discussion about the implications of any of it. It’s all dazzle, action, and a basic crime drama. There’s no soul to this film. 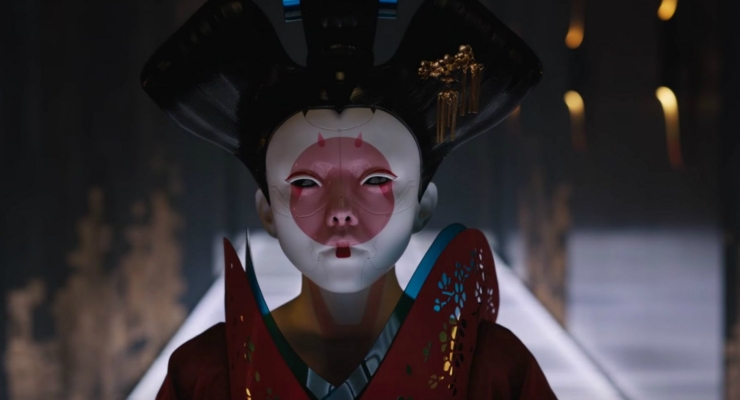 Ghost in the Shell was shot on an Arri Alexa 65 with Panavision Sphero 65 and Sphero 65 Panavision lenses at 5K resolution. A 2K DI was utilized in post processing and the film was done in Dolby Vision high dynamic range. It arrives on 4K Ultra HD in an HEVC 2160p encodement with HDR10 high dynamic range. Ghost in the Shell is a film that really benefits from the added benefit of HDR and WCG (wide color gamut). One of my go-to scenes is when the Major is diving at night and comes up to find Bateau waiting on the boat for her, the Tokyo skyline in the distance behind them sparkling like jewels against the dark sky; the boat glowing as well with a bright, green-tinted glow. This scene really stands out on the Ultra HD for its highlights and color reproduction. The Blu-ray looks good as well, but doesn’t offer the same color saturation and ‘pop’.

To go along with the stunning visuals an immersive Dolby Atmos soundtrack is included. The mix is at times atmospheric, surrounding one in the lush, techno new age score of Lorne Balfe and Clint Mansell and other times solidly discrete with the hyper-kinetic action sequences allowing plenty of sound effects to move through the channels. Low end is beefy and dialogue remains clear above the fray.

The special features included with Ghost in the Shell are disappointingly slim, but they do cover an array of topics from the philosophical roots of the original material to the making of the film in a thirty-minute featurette. Blu-ray and Digital HD are also included.

There have been a lot of Ghost in the Shell sequels and TV series since its original anime feature was released. There have also been many other productions that were heavily influenced by the franchise, such as Psycho-Pass, just as an example. Most of them have done a way better job at capturing the essence of GitS than this live action interpretation from Hollywood, which seems fixated on the action and visuals, but misses the core values of franchise. That said, this 4K Ultra HD release looks and sounds spectacular.