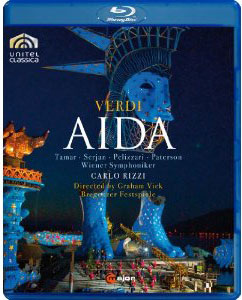 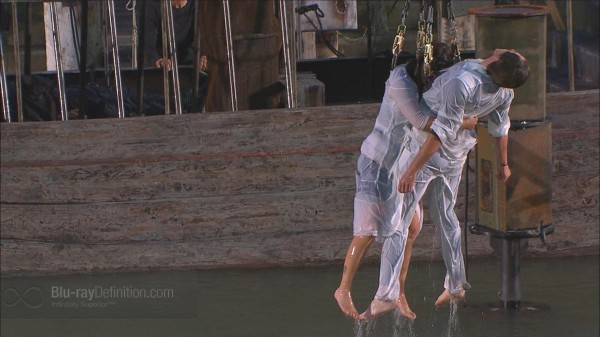 Giuseppe Verdi meets “Waterworld?” The Bregenz Festival presents an entire rethinking of Aida, one of the most familiar and traditional operas in the repertory.  It opens with shots of the dead hero and heroine being fished out of the water.  The set contains two enormous blue star-studded feet and a pair of mechanical cranes surrounding a pyramidal stairway.  Perhaps not what you would expect of a story set in ancient Egypt.  But director Graham Vick had numerous tricks up his sleeves which mostly work, at least from a technical perspective.

The story is a love triangle involving Amneris (Iano Tamar), Princess of Egypt, Radames, leader of the Egyptian army and her intended lover (Rubens Pelizzari), and Aida, the slave of Amneris (Tatiana Serjan), but really the daughter of Amonasro, the captured King of Ethiopia (Iain Patterson).  This relationship becomes complicated when Radames falls  in love with Aida, eventually sacrificing his status as Egypt’s ruler as well as his life when this affair is discovered by Amneris.

The iconic moment of Aida is the “Triumphal March” at the end of Act II and this is handled in an unconventional but clever way by director Vick. Not to spoil all of the surprises here, but there is an elephant, and huge cast on-stage. And, we find out the blue feet belong to a fragmented Statue of Liberty. 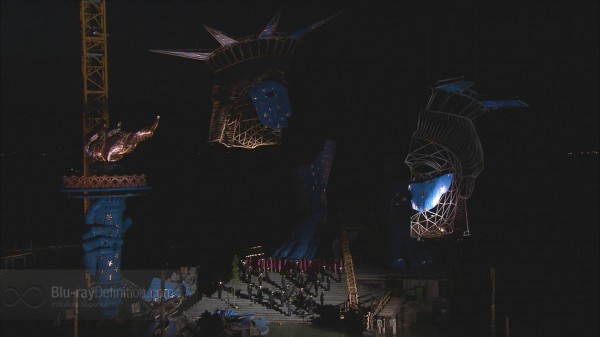 The production begins in the early dusk and becomes dark rather quickly with sunset.  This works to the advantage of the stagecraft.  While  the setting of this opera in a watery environment might seem an unusual choice, the original Aida does take place along the banks of the Nile River, so this is not an insurmountable leap of faith.  The coordination of singers’ entrances and exits as well as the choreography actually works quite well in the water.  The costumes are a mixed bag of modern formal, casual garb, rain wear, and just plain strange,  like the scantily clad men with black bags over their heads. However there is a panoply of striking colors that enhance the large choral and dance sequences. 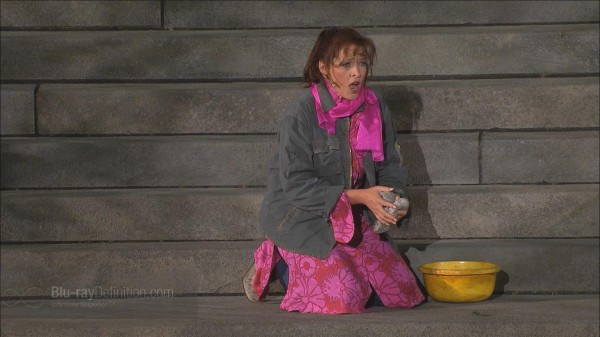 The dts-HD Master Audio (96kHz/24-bit) does not help convey the live effects of this performance.  The orchestra was recorded off-stage for obvious reasons and the singers are miked (something that would never happen in conventionally staged opera).  The singing varies from merely competent (both female leads) to  undistinguished  (the male lead). Overall, it is typical of what would be heard in a provincial opera house.  Soprano Serjan is a visually attractive but vocally reticent Aida.  She fails to add much characterization to this complex and conflicted role. The choral scenes are quite good but you don’t go to Aida for the chorus. 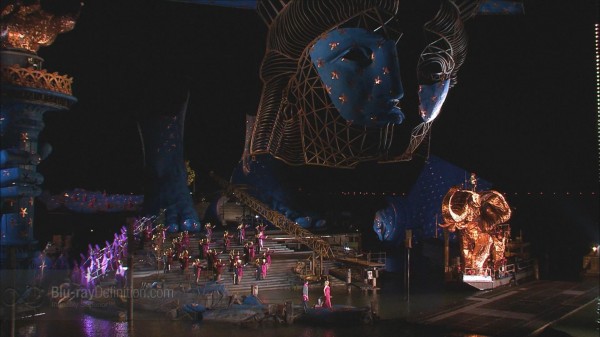 There are no supplemental interviews. This is a pity as I would have loved to have seen how these complex mechanical sets were configured and made to work seamlessly. I also would have been interested to hear from the director regarding his concept of Aida as a Cirque du Soleil show. 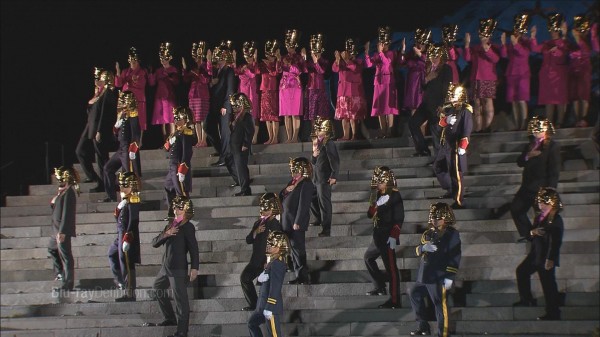 This BD will not be a leading choice for Aida.  Its novel staging provides some interest but the cast is lackluster at best.  The only other available BD is the traditionally staged Zeffirelli production featuring Violeta Urmana and Robert Alagna as the principals and Riccardo Chailly conducting the La Scala company.  Unfortunately, it is flawed by some bizarre videography and Alagna’s  difficulties with the role of Radames.  While the high-def field is still open, the 1989 Met production on DVD features a stellar cast, headed by Aprile Millo and Placido Domingo, way better in all respects than either of the current BDs. 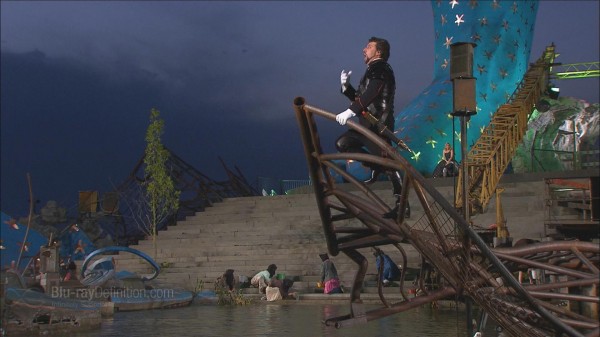