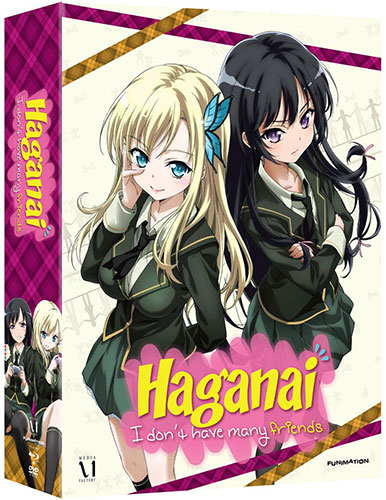 Haganai: I Don’t Have Many Friends (Boku wa Tomodachi ga Sukunai; 僕は友達が少ない) is originally from a series of light novels Hirasaka Yomi, illustrated by Buriki, and published by Media Factory. A number of manga adaptations have been created as well, and of course the anime series included here, and its sequel, Boku wa Tomodachi ga Sukunai: Next. The anime series is a comedy that mixes elements of high school drama and sci-fi/fantasy with mild fan service.

Hasegawa Kodaka is a high school teen who moves around a lot due to his father’s job. He’s always had a hard time fitting in wherever he goes because of his dirty-blond hair inherited from his deceased English mother, and kids’ and teachers’ misunderstanding of him, believing him a delinquent “Yankee”. When he transfers into the Catholic school St. Chronica’s Academy, he encounters the same troubles, especially after a misunderstood first impression in homeroom, when he arrives tired, out of breath, stumbling, and appears to attack the teacher. After school, Kodaka meets the equally solitary and rather catty Mikazuki Yozora, as she is alone and speaking to her invisible friend. The two come up with an idea to start a new school club, “The Neighbors Club”, the objective being to learn how to meet friends. It attracts the attention of the rich and blonde daughter of the school President Kashiwazaki Sena, who joins and immediately strikes a nerve with Yozora – the two become instant enemies. Shiguma Rika, a perverted girl who takes all her classes in the school’s lab, also joins the club after Kodaka rescues her when she makes herself pass out from a lab experiment. Rounding out the members are the bishōnen Kusunoki Yukimura, who enters as a stalker of Kodaka, but becomes a member of the club and mentee of Kodaka in an effort to become more masculine, but on the advisement of Yozora, he only wears women’s clothing, such as French maid uniforms and string bikinis. Rounding out the club are the two younger girls, Kodaka’s sister Kobato, a middle-school student who dresses in Loli-Goth attire, has a fascination with vampires, and a brother complex. Then there’s Sister Takayama Maria, the 10-year old supervisor for the Neighbors Club who competes with Kobato for Kodaka’s affections and has her own rows with Kobato, not unlike those of Yozora and Sena.

The series is immensely funny and clever in the way it seamlessly spoofs all the anime genres at once, using fantasy, mecha, high school romance, and fan service elements, with the tool being the “assignments” that the club uses to learn how to gain friends. Mostly they play video games, in which we, the viewers, are often transported into fantastical worlds of erotic sci-fi or dating sims. Even the obligatory “swimsuit episode” turns out to be a wash, no pun intended, as the club, whose activities usually go askew, ends up at a public water park overcrowded, bickering, and leaving before the swimsuits ever really get used.

The basis of the series is the idea that these high school misfits are meant to learn how to find friends, even as they, obviously, don’t realize they are becoming friends amongst themselves already. However, the writers really stretch the boundaries of likability, especially for the tsundere archetype that is Yozora, who continues to do and say some of the cruelest and nastiest things to the gullible Sena, making one feel more sympathy for the latter and, really, perplexed about the justification for keeping the latter around at all.

Some character issues aside, this series is instantly enjoyable, amusing, and, as you can see, is nicely animated. Visually, there’s nothing groundbreaking, but the character designs are all unique, distinctive, and quite intricate, particularly the Loli-Goth look of Kobato, and the mecha sequences.

There were some subtle instances of aliasing in this AVC/MPEG-4 1080p encodement, but for the most part the line art was pretty clean, but the overall image was still somewhat soft and contained a lot of banding and some video noise. Apart from that, colors tend to look vibrant and it’s an acceptable, if not wholly reference presentation.

The Japanese Dolby TrueHD 2.0 (48kHz/24-bit) stereo track was my soundtrack of choice, but an English Dolby TrueHD 5.1 (48kHz/24-bit) dub is also provided. The stereo track is clean with effective stereo panning and subtle dynamic range, though it is mastered at a somewhat low level. The 5.1 soundtrack spreads things out, extends lows a bit more and boosts ambience in the surround channels, but is far from an aggressive mix. Take your pick, I always opt for the original language. To me, the Japanese cast really nails these characters, and the subtitles are funnier than the English dialogue.

The supplements are mostly promotional in nature, but two audio commentaries are also included.

Haganai: I Don’t Have Many Friends is a funny and addictive series with its blend of genres, strong artwork, and distinctive characters, from beginning to end.