If the 2001 adaptation of J.K. Rowling’s Harry Potter and the Sorcerer’s Stone was like Metallica’s Ride the Lightning, then 2002’s Harry Potter and the Chamber of Secrets was Master of Puppets– the same, but also a leap forward in story development as well as technical wizardry. Metal fans will get the gist of that.

Chris Columbus stays behind the camera to direct this second entry that finds Harry (Daniel Radcliffe) being warned off from returning to Hogwarts by beloved Potter character Dobby the house elf (voiced by Toby Jones). Despite the warnings, Harry returns to Hogwarts and rejoins his friends Ron (Rupert Grint) and Hermione (Emma Watson). Not unexpectedly, The three friends find the school plagued by a series of dangerous attacks and muggle-born students being put under petrification spells. As Harry launches a clandestine investigation it leads him to a book, a secret chamber beneath the school, and the story of former Hogwarts student named Tom Riddle who hated muggles.

This is the film where the saga of Harry Potter on the big screen really begins to come into shape. Where Sorcerer’s Stone was really a jumping off point to lay the groundwork and introduce the world to these characters – especially if one hadn’t already read the books – Harry Potter and the Chamber of Secrets no longer had to spend time priming audiences. Now the long story arc about Harry’s past and his destiny begins. The central mystery is an engaging one, but the film, although it does get just a little darker than year 1, doesn’t forget the family fun. There’s the signature quidditch match, plenty of gags (Ron barfing up slugs anyone?) and as always the irresistible chemistry between the three kids.

Harry Potter and the Chamber of Secrets also steps up the quality of the visual effects. Even though it followed in theaters only a year after the first film, the 3DCG effects look better, in particular those involving humans. Nothing sticks out as fake as it did in Sorcerer’s Secret. Then of course there’s Dobby, who like Gollum in The Lord of the Rings is a motion capture creature that looks as realistic and palpable as can be, especially for the effects of the era. 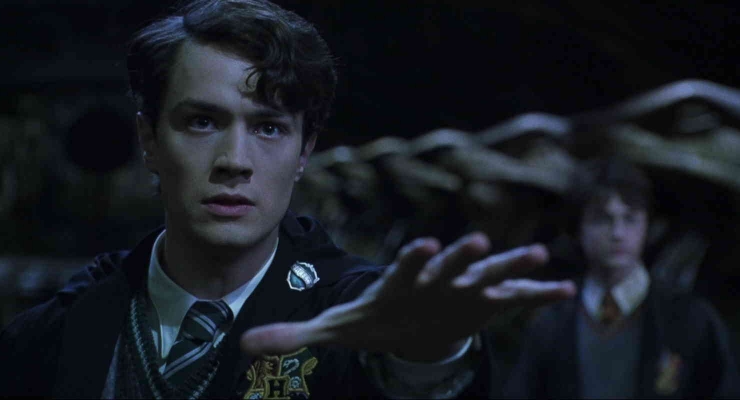 Harry Potter and the Chamber of Secrets was originally shot on 35mm film stock and comes to 4K Ultra HD in a 2.40:1 HEVC 2160p (4K) encodement with HDR10 High Dynamic Range (HDR). This second film in the franchise looks a just a step up in every way over its predecessor in terms of the original production, the grain structure, and this new transfer’s HDR. The few moments of exposed, cheesy looking CG effects are gone, the detail remains pretty consistent throughout with excellent depth of field. The colors are very rich without being oversaturated, giving a wonderful palette. The flames of fireplaces and torches look almost three-dimensional as do the wand spell effects. Some slight black crush is apparent in shadows in only the very darkest of scenes, but not enough to take away much from the overall detail.

We get another fine, immersive DTS:X mix for Harry Potter and the Chamber of Secrets that places us in the midst of all the action at and around Hogwarts from flying carts whooshing overhead to the growl of giant spiders over our shoulders. The dialogue is full and clear an early in the film there’s a moment where an announcement over the Hogwarts PA from Maggie Smith that fills the room and overheads.

As with the other 4K reissues of the Potter films, Harry Potter and the chamber of secrets comes with ported over special features on it main feature Blu-ray Disc and Bonus Blu-ray Disc. No new features are included.

An excellent sophomore effort and a magnificent 4K transfer and immersive DTS:X mix for Harry Potter and the Chamber of Secrets. Fans of this franchise should grab this one up.

Harry Potter and the Chamber of Secrets is out now on 4K Ultra HD Combo Pack from Warner Bros.