The 2010 film Harry Potter and the Deathly Hallows – Part 1, once again directed by David Yates from an adaptation by Steve Kloves of J.K. Rowling’s novel, marked the beginning of the end for the Harry Potter saga. This worldwide fantasy phenomenon, which had seen its main characters grow up before our very eyes had become so ingrained and such a moneymaker that the single book was in two for two final films. The resulting film was much more slow-paced than the previous Potter films, and the directly preceding film in particular; The Half-Blood Prince which had as its biggest flaw disjointedness in mood and chronology.

Deathly Hallows — Part 1 is dark, brooding, and at times downright frightening. As Harry (Daniel Radcliffe), Hermione (Emma Watson), and Ron (Rupert Grint) have grown up, so too has the story. There’s no Hogwarts magic school, no more classes, the three friends have quickly become adults and must now use everything they’ve learned to save the world and the Ministry of Magic.

Voldemort (Ralph Fiennes), the Dark Lord, is growing stronger, and he has taken over the Ministry. He’s killing off Muggles and any magical beings in his path. Now he’s after Harry. Harry and his friends must find the remaining Horcruxes (magical items that contain pieces of Voldemort’s soul) and destroy them before it is too late. Along their journey, they uncover the most powerful magical things ever created – the Deathly Hallows and also learn that Vodemort is after the most powerful wand in the wizarding world, the Elder Wand.

Deathly Hallows will be a bit confusing, no doubt, to anyone who has neither read the books nor seen the previous films in the franchise. Going through the previous films at the very least is recommended, but there is still plenty to enjoy in Deathly Hallows. The acting of the young cast progressed greatly from the first film, especially in Emma Watson’s portrayal of the know-it-all muggle-born Hermione, who by this film comes across far less purposely obnoxious and more sophisticated, complicated, and often conflicted and contradictory and young women (and men) often are.

Yates’ direction for this film is even keeled and he just about abandons the lighthearted fantasy of all the preceding films for a consistent horror – a desaturated image, a sense of dread, a feeling of impending doom and possible death around every corner. Although Deathly Hallows — Part 1 never quite reaches the same adventurous, well-rounded level of The Order of the Phoenix, it can be forgiven given that it is only the first half of a much longer arc in a grand finale to what was and is a great fantasy series. 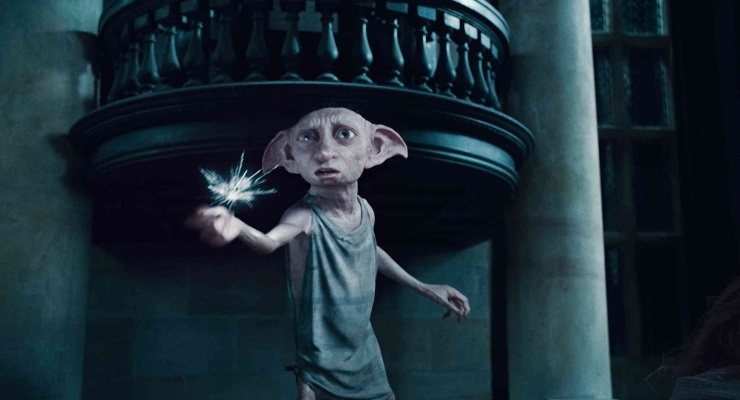 Harry Potter and the Deathly Hallows – Part 1 was shot originally on 35 mm Kodak Vision2 250D 5205 and Vision3 500T 5219 film stock and one can only assume (I’ve not been able to track down any information) that Warner has gone back and rescanned the original negatives to create these 4K releases given it dates from 2010 and originally used a 2K DI (Digital Intermediate) that would have been unlikely to have the 10 or 12-bit depth necessary for HDR. Deathly Hallows arrives on 4K Ultra HD framed at 2.40:1 in an HEVC HDR (HDR10 format) encoded transfer. Of the Harry Potter films on Ultra HD I was sent (the two previous and this), Deathly Hallows Part 1 looks the least impressive. I don’t mean that it looks bad at all, but it is such a dark, desaturated film, that nothing really ‘pops’ and there is a little more graininess apparent as well. The HDR effects are still fantastic, that said, and the contrast is superb between the blackest blacks and shockingly brightest bright effects.

As with the two previous Harry Potter films on Ultra HD (The Order of the Phoenix and The Half-Blood Prince), The Deathly Hallows – Part 1 comes with a new DTS:X (compatible with DTS-HD Master Audio 7.1) mix. The sound mixers make full use of those added channels mixing lots of solid sound effects and atmospherics through the height channels, the surround back channels, the surround channels, and of course across the front. The first act scene as Harry and co. try to outrun the Death Eaters is just one of the many scenes that will show off your system and give your LFE a workout. If DTS:X had a soft introduction with previous titles, it has finally arrived with a splash on these Harry Potter reissues.

The extras offered are numerous, but only a boon for those who have never owned the multiple issues of Harry Potter releases on Blu-ray and DVD in the past.

As a first half to the finale of this beast of a fantasy franchise, Harry Potter and the Deathly Hallows – Part 1 is a solid effort. It’s well-paced, mature, and filled with glorious visual effects. There is no better way to relive it than this spectacular Ultra HD release from Warner Bros.