Filmmaker Martin McDonagh may more recently be known for his Oscar-nominated Three Billboards Outside Ebbing, Missouri but before that he made two other films that have garnered a bit of cult status, the first being 2008’s In Bruges, followed by 2012’s Seven Psychopaths. What all three films have in common is they are somewhat dark comedies, with the two formers having the strongest connection.

The film is set in the city that gives its film its title. For any who don’t know, it is an picturesque small city in Belgium that maintains its medieval charm – modern structures hardly intrude and the sound water trickling through canals is a soothing background noise. Having had the pleasure of visiting, I would say it’s impossible for anyone not to fall in love with the place. Anyone that is, except for one of this film’s characters.

After a botched job, two hitmen, Ray (Colin Farrell) and Ken (Brendan Gleeson) are sent to Bruges to cool their heels for a bit by their boss Harry (Ralph Fiennes) and wait for his call. Ken instantly falls in love with Bruges’ quaintness, its medieval buildings, cobbled streets and canals, but Ray has no patience with any of it. He causes trouble with everyone he meets, wants to leave and go back to London, and just get out of there. While Ray does manage to start up an affair with a beautiful local actress named Chloe (Clémence Poésy) after crashing her film set, that soon turns sour – but not as sour as Ray and Ken’s time in Bruges when the call from Harry finally does come in and things take an unexpected turn.

This is a small film that feels bigger than it is, no doubt thanks to its wonderful on-location shooting in its title city. It’s also immeasurably watchable due to its clever dialogue by McDonagh who also wrote the screenplay and shows a great command for witticisms. As far as debuts go, this film could be compared to the likes of Tarantino’s Reservoir Dogs, especially given the vague similarity of  themes, but in any case, it sure put him on an obvious trajectory that still has him heading upwards, even if he isn’t the most prolific, but quality is better than quantity. 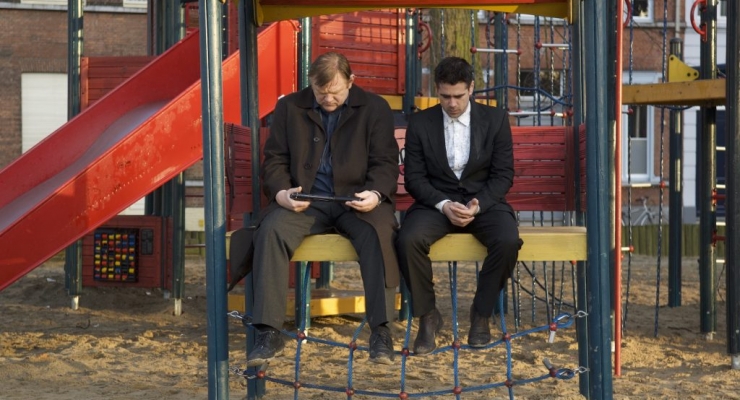 Brendan Gleeson and Colin Farrell in In Bruges (2008)
10 Photos

In Bruges was originally shot on 35 mm Kodak Vision2 250D 5205 and Vision2 500T 5218 film stock with a number of Arri cameras. Hailing from 2008, the film holds up well in this new issue on Blu-ray, encoded in AVC at 1080p and framed at 2.35:1, likely owing to the 2K digital intermediate master. There is no evidence that a whole new restoration has been undertaken. While there is some black crush evident, the overall detail is solid and the film’s grain structure looks sharp and natural. It’s also clean with no evident source damage. Colors are natural as well.

In Bruges comes with an English DTS-HD Master Audio 5.1 mix. The mix is generally subtle, with mild atmospherics in the surround channels, yet good, wide stereo panning and dynamic range. It really comes alive in the finale when the rock-inspired score is brought to the fore and the channels, including the LFE, come alive.

This new special edition features all-new artwork by Thomas Walker, who designed the exclusive cover for the Faber and Faber screenplay also included with this release, alongside a 50-page softcover book.

This new limited edition is feature-rich, looks great, and certainly the film still holds up to repeat viewings. Recommended.