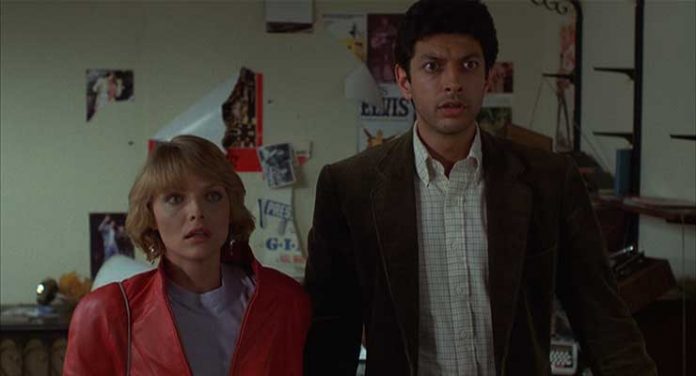 In 1985 director John Landis (An American Werewolf in London) proffered his entry in the zany all night madcap adventure along the lines of films like Bachelor Party. Into the Night stars Jeff Goldblum, Michelle Pfeiffer and a small cadre of entertainers brought in for cameos ranging from Dan Aykroyd as Goldblum’s work colleague Herb to David Bowie as a paid assassin.

Goldblum plays aerospace engineer Ed Okin who has suffered what seems like an inhumanly long bout of insomnia. After finding out his wife has had an affair, Ed slips out of his house in the middle of the night to settle his thoughts and possible take an impromptu trip to Las Vegas on the advice of work friend Herb (Aykroyd). There he meets the beautiful and glamorous Diana (“like Princess Diana”) (Pfeiffer) who arrives at the airport smuggling stolen emeralds and is greeted by a group of Iranians hired to assassinate her, her boyfriend, and reclaim the jewels. Diana runs to Ed for help who is just idling in his car, and the two set off on a wacky and dangerous adventure of avoiding several killers, car chases in the back of taxis.

While Landis infuses Into the Night with an epic feel of late night adventure, this is a paint-by-numbers madcap comedy with two one-dimensional characters at the center of it all surrounded by caricatures to drive the narrative forward. Diana is a woman concerned with nothing more than capturing rich men and the material things they can give her and it is exactly what has gotten her into hot water. Ed is a like a zombie. Cuckolded by his wife yet still idiotic enough to be led around into danger by a gorgeous woman. The surrounding characters are filled by the likes of the menacing Middle Eastern men, the evil British assassin, the sleazy Hollywood producer (though given recent events, that may not be too far off), and the airhead bodybuilder.

The best parts of Into the Night are the glamorous depictions of Los Angeles thanks to the cinematography of Robert Paynter who paints the city in all neon and shadow at night and the sun soaked glitz of Hollywood during the day. 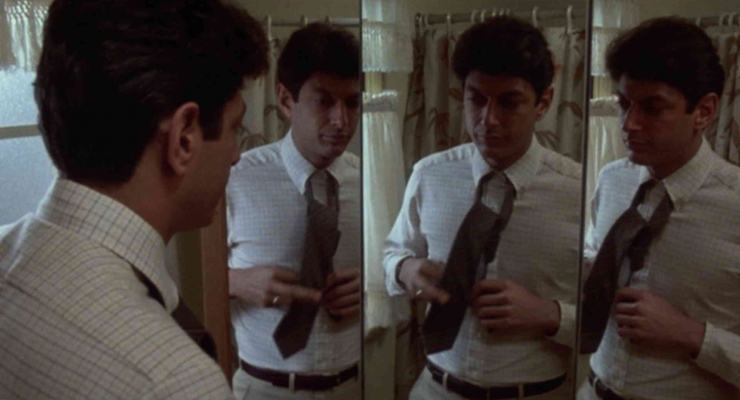 Into the Night arrives on Blu-ray in an AVC 1080p encodement from a newly restored master framed at 1.85:1. The image from the start looks natural with the 35mm grain preserved, but it is also a little inconsistent. The opening title sequences of the night skyline show patches of fade that could have been burned in a bit better. While there isn’t a lot of source damage there is film softness and an overall sort of dimness. Nothing really ‘pops’ much, but the colors look good enough given the vintage.

The original monaural mix for Into the Night is included on this Blu-ray release from Shout! in DTS-HD MA 2.0. The audio is surprisingly dynamic, especially when the ‘80s music track kicks in. Dialogue is clear as well.

John Landis and Jeff Goldblum are both brought back for two brand new interviews included in the special features. Also included is the archival BB King doc and the theatrical trailer.

A bit of 1980s escapism from John Landis,this film is epic on the surface, but pure madcap adventure at its core. This Shout Select release looks satisfying given the material and age and provides two new interviews with Landis and Goldblum worth watching.

Into the Night (Collector’s Edition) is out now on Blu-ray from Shout! Factory.

2.9 / 5 TheaterByte Rating
{{ reviewsOverall }} / 5 User Rating (0 votes)
RRating Certificate
Universal Pictures | Shout! FactoryStudios & Distributors
John LandisDirector
Ron KoslowWriter
115 Mins.Run Time
$27.99MSRP
7 Nov. 2017Release Date
1.85:1Aspect Ratio
AVC 1080pVideo
English DTS-HD MA 2.0 StereoAudio
English SDHSubtitles
The Creative Content
The Video
The Audio
The Supplements
Summary
Aerospace engineer Ed Okin (Jeff Goldblum), suffering a lengthy bout of insomnia, and finding out his wife is cheating on him, goes to the airport in the middle of the night to clear his head where he encounters the beautiful Diana (Michelle Pfeiffer) who is on the run from assassins seeking emeralds she smuggled into the country in this gorgeously filmed yet run-of-the-mill 1980s all-night-madcap adventure from director John Landis.
What people say... Login to rate
Order by: