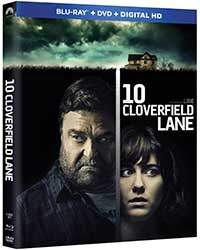 10 Cloverfield Lane is the indirect sequel to the J.J. Abrams found footage sci-fi production Cloverfield, and the film couldn’t be anymore different in tone. With a viral campaign dropped only a couple of months before the film’s release, this one was a complete surprise.

As sequels go, 10 Cloverfield doesn’t try to recreate the style of Cloverfield or even continue the events that occurred, but rather it creates a different tale in the universe in which the events of Cloverfield take place. And they are truly haunting; more haunting than the original in many ways.

The film begins as Michelle (Mary Elizabeth Winstead) is running away from a presumably bad relationship. As she is driving, her fiancé calls her and in the darkness, she is distracted by the phone call. Suddenly she is in a car accident and awakes to find herself injured in a leg brace and shackled to a bed in what could easily be an underground torture room. In comes Howard (John Goodman). At first we only see his feet before the camera slowly pans up. What’s going to happen to

Michelle? Howard informs Michelle that the world outside is no longer safe. There has been some sort of attack, perhaps nuclear, perhaps biological. The air is unsafe; it’s killing people. Maybe it’s terrorists, maybe it’s the Russians or the North Koreans, or maybe it’s extraterrestrials. We don’t know. Howard has built this underground bunker for just such an event. He’s a survivalist and seems a little deranged. Michelle is uneasy.

Howard and Michelle aren’t alone. There’s a younger man there with them as well, Emmett (John Gallagher Jr.) managed to get into the bunker during the attack. He’s from around the area and witnessed Howard as he built the bunker. Emmett’s shoulder is injured, apparently from when he made a storage unit full of food fall on him. Michelle is wary of Howard, firstly because he chained her to her bed, but secondly because he has a terrible temper and is prone to fits of rage. She’s still suspicious of whether his story of an attack outside the sealed off bunker is true or not, even though the quite friendly and charming Emmett confirms he saw something before Howard let him inside.

As Howard keeps getting scarier, and when he finally allows Michelle some freedom to wander, she and Emmett begin to investigate and discover what seems like a horrifying violent secret from Howard’s past concerning him, his daughter, and his daughter’s friend. The question now becomes, is Howard such a monster that it is worse to stay in the bunker with him or is it worse to try to get out, where there may or may not be something deadly that can kill them?

The first two acts of the film are intense, claustrophobic, and horrific psychological drama and, not to give everything away, the third act really opens everything up in an explosion of action that will have you on the edge of your seat.

The acting is superb from the cast. John Goodman puts on a spectacularly chilling performance as the dangerous, unhinged survivalist who very well may be the true monster, and Mary Elizabeth Winstead is genius as the heroine, both vulnerable, yet determined.

Dan Trachtenberg’s direction is chilling and atmospheric and makes the most of the tight confines of the setting as well as the eerie musical score of Bear McCreary, which is often juxtaposed with oddly out-of-place, cheerful pop music of the ’50s and ’60s.

For a different take, read our own Gerard Iribe’s theatrical review of 10 Cloverfield Lane.

10 Cloverfield Lane is an anamorphic digital production shot on the Red Epic Dragon that shows up on Blu-ray in an AVC 1080p encodement framed at 2.35:1 from Paramount.

10 Cloverfield Lane get an outstanding English Dolby Atmos mix on Blu-ray, one of the best I have heard so far.

The first two acts of the film are very atmospheric and dialogue-driven, but there is plenty of balance and lots of foley effects that draw you into the film. The sound of rumbling outside of the bunker really sounds like something pounding over your head, with deep extended low-end and the Atmos channels take it to another level. In the scene where the alarm goes off in the bunker, it comes from overhead and echoes throughout the room. In the third act, things get really aggressive and action-intense, and the low-end get even bigger, discrete effects come from everywhere, and those extra channels put bone chilling sounds practically inside your head.

We get a really good audio commentary from Dan Trachtenberg and J.J. Abrams and just over 30-minutes of featurettes covering the making of the film that also offer interviews with the cast and crew. While it isn’t an overwhelming number of extras, they do offer good information.

An atmospheric indirect sequel to Cloverfield that expands the franchise’s universe, 10 Cloverfield Lane is a riveting thriller with a superb cast and strong direction. If producer J.J. Abrams can continue expanding the world of with more clever films surrounding the events and people of Cloverfield, then this will be a powerhouse franchise. This Blu-ray is a reference Home Theater release for picture and sound. Highly recommended.