Hong Kong filmmaker Johnnie To (Drug War) returns to his favorite genre, the crime thriller, for the 2016 slow-burner Three. The title, at least in English, is meant as a reference to the “three complex characters” that the story follows. In actuality, there isn’t much complexity behind the characters in Three at all, even if the film does manage to maintain an entertaining sense of suspense in its slow boil.

A police sting goes bad and the criminal Shun (Wallace Chung, Drug War) is rushed into a hospital’s emergency room with a bullet lodged in his brain by hard-edged Chief Inspector Ken (Louis Koo, Triad Election) and his team. The circumstances surrounding the shooting are unclear, but Ken wants to bust Shun and get him to rat out his partners. Things take a turn when Shun refuses treatment and the dedicated neurosurgeon responsible for his treatment, Dr. Qian Tong (Zhao Wei, Red Cliff), is caught between trying to save Shun’s life and trying to help the police. Shun keeps refusing treatment and manages to convince the doctor to call his friends, friends she believes can convince him to have the surgery he desperately needs. It turns out that the phone call was just a rouse to get his cronies to break him out and kill the Chief Inspector. Meanwhile, there’s a growing mystery surrounding how Shun was actually shot in the head – did he shoot himself to get out of being cornered or did something else happen? With Ken making maneuvers to get Shun’s prints on a mysterious gun to have it sent back to the station for analyses, something seems awry.

Three never manages to take its “three complex characters” beyond the two-dimensional archetypes of the hard-as-nails cop, the violent criminal, and the empathetic doctor and there are some perplexing plot holes in the film that are allowed to occur for the sake of allowing some later action to occur. For instance, when one of Ken’s subordinates, a portly and disheveled cop named, of all things, Fatty (Lam Suet) allows a suspect he’s trailing in the hospital to leave a suspicious package behind in a garbage bin. You can guess what happens sometime later.

Although billed as an action film, there isn’t much action in Johnnie To’s film apart from the fantastically filmed slow-motion gun battle in the hospital ER that unfolds with balletic grace and precision. It is the most the exhilarating part of the film and worth sitting through the rather slow, but never boring, previous two acts. The ending is all too rushed, however, in one final moment with Ken in which all that began the entire setup with Shun and the bullet in his brain is finally revealed.

While Three is not one of To’s strongest films, it is entertaining and the he holds its simple premise together well as do the performances of its veteran cast. 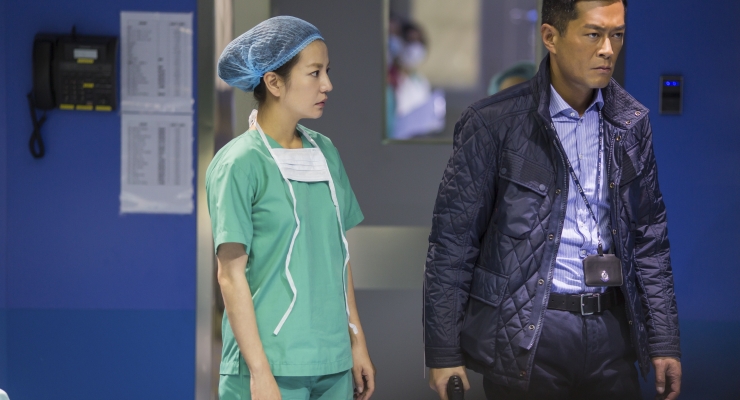 Three was shot on the Arri Alexa XT Plus high definition camera with Technovision/Zeiss Super Speed, Standard Speed, Cooke Varotal, Angenieux HR and Optimo lenses in the anamorphic format at 3.4K and 2.8K resolution and utilized a 2K DI (Digital Intermediate) in the color coding and processing stage. It arrives on Blu-ray in a 2.40:1 AVC 1080p encodement from Well Go USA Entertainment. It is a good, but not great looking disc, meaning the colors look natural and shadows are nuanced and there’s strong contrast, but there is obvious color banding that creeps into solid color backgrounds, particularly in darker scenes. It could be in the camera or in the encoding.

Three gets a solid Cantonese DTS:X mix that could have been a little more beefed up in the low-end during the big gunplay scene and the explosives scene, but other than that, for a film that is basically dialogue-driven it is better than expected. The channels are filled with atmospheric foley effects and the “X” channels provide excellent additional space and ambience. The dialogue is also clear and full.

This is a very barebones disc that only has two very brief, so-called “making of” featurettes that amount to little more than some b-roll footage and passing interviews with the cast and crew. There is also a theatrical trailer of Three as well as the usual opening trailers from other Well Go titles.

This latest Hong Kong crime thriller from Johnnie To is a little uneven, but still satisfying thanks to the taut direction and strong performances of its cast. The Blu-ray Disc provides a rich DTS:X sound mix that is atmospheric and dynamic, but the image is hindered a bit by some banding that brings it down a couple of notches.