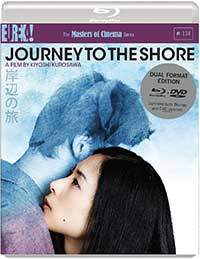 The latest film from Japanese director Kurosawa Kiyoshi (Tokyo Sonata, Pulse) is a redefinition of the J-Horror the filmmaker has previously been associated with. An introspective paranormal fantasy romance, Journey to the Shore follows the story of a piano teacher, Mizuki (Fukatsu Eri) who, after three years, has the spirit of her dead husband Yusuke (Asano Tadanobu) return to her. Rather than being surprised, Mizuki questions why it took Yusuke so long to return to her after he

presumably drowned, tragically, and, as he tells her, his “his body was eaten by crabs.” Yusuke then convinces Mizuki to go on a journey with him to go find the people who helped him return to her, as he puts it, people he “left… in the lurch.” The two set out on a meandering trip through the countryside where they, Mizuki in particular, cross path with a number of people who, like them, are either struggling to deal with loss, such as an estranged wife or a dead daughter. Some of the people are even dead and don’t know it, such as the kindly old Mr Shimakage (Komatsu Masao) who works distributing a local newspaper. He had been so caught up in regret over mistreating his wife who left him, he failed to realize his own death.

Part of the journey is Mizuki and Yusuke coming to terms with the broken relationship that led to the tragic death and their three-year “separation;” it’s a renewal of their love, so to speak, “Once more from the start. Don’t rush it. Nice and slow.” As the opening lines of the film the film spoken by Mizuki say and as the lazy pace of the Journey to the Shore parallels. But the journey is also a confrontation. Mizuki comes face to face with the workplace colleague that Yusuke apparently had an affair with and this is the spur that finally allows her to stop lingering in the past, and move on.

Kurosawa has said that the film is intended to convey a broad sense of the Japanese verb “mitoru” which, roughly translated, means to accompany or watch over a dying person until their death. Journey to the Shore transplants this idea away from the usual place of the dying’s deathbed to the world at large and even away from the actual dying, bringing “alive” again the spirit of the dead as they continue to journey with the help of – and in fact as they even help – the living until some resolve, some peace is found and that resting place is met. The tropes of the J-horror genre are subtly deployed throughout Journey to the Shore, but used in such a way that the bone chilling, skin tingling elements have been stripped away for something more domesticated. It all works to good effect

The HD production of Journey to the Shore arrives on Blu-ray from the Masters of Cinema series in a beautiful and pristine 1080p AVC encodement framed at 2.35:1. The picture is crisp and free from color banding, video noise, aliasing or posterization. Colors never quite “pop” in what is a somewhat dim and desaturated pallet, but this stylistic choice goes with the overall mood of the film.

A Japanese DTS-HD Master Audio 5.1 soundtrack is supplied (LPCM 2.0 stereo is also included) for Journey to

the Shore. Just as the film is subtle and slow-paced, the sound mix is subtle and laidback. The surround channels for the most part carry very low-level atmospheric effects, but the mix is nicely balanced and sounds naturally dynamic. When the often melancholic and romantic classical score by Etô Naoko and Ôtomo Yoshihide swells it sounds soothing, easy on the ears and the reverberant tail-offs are natural. The mix does become more discrete during a sequence where Mizuki sees the ghost of her father near a waterfall. We are then surrounded by the sound of water rushing all around us. This is one of the more active sequences and it also allows for a little more low end extension.

Masters of Cinema doesn’t provide much with this release, but the essay and director’s statement are definitely worth reading and offer a lot of insight into the meaning and symbolism in the film.

Those looking for the usual horror and ghost stories will not find it in Journey to the Shore. This quite well done and heartwarming supernatural fantasy is, however, a beautiful look at life, love, and moving on when effected deeply by loss. The Masters of Cinema series release is a very pleasing Blu-ray edition.