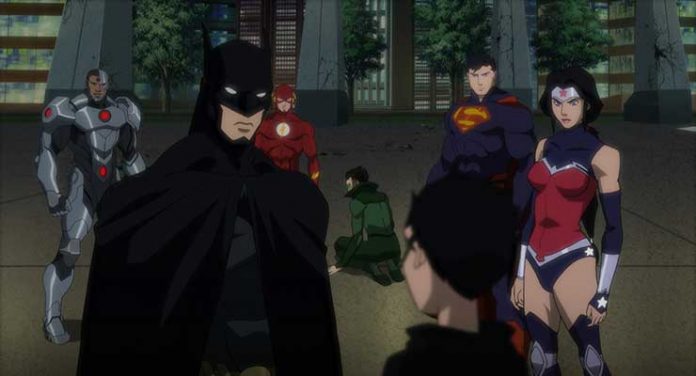 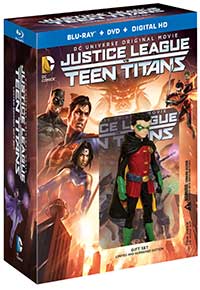 Warner Bros. And DC Comics bring another DC Universe Original Movie to Blu-ray with Justice League Vs. Teen Titans. The tittle is not as ominous as it sounds, because the mighty superheroes of the Justice League do not actually battle their young counterparts, per se. The story here centers around young Damian, Batman’s son and the new Robin. The frustrated young Robin going through growing pains and fed up with what he perceives as Batman not utilizing his abilities nearly blows a Justice League mission when he disobeys orders, so Batman sends him away for training alongside the Teen Titans. But Robin/Damian’s new assignment and schooling turns out to be all the hero’s least worry. Teen Titan Raven’s father, an inter-dimensional demon named Trigon, wants to break free from the prison he has been locked in, and he wants to use his unwilling daughter Raven to help him. If he succeeds, it will mean the end of humanity. He has already managed to possess the body of Superman, then Wonder Woman, and eventually the rest of the Justice League heroes. The Teen Titans and infected Justice League have a showdown both to save themselves and to save Raven and humanity from Trigon’s evil clutches.

The voice cast for Justice League Vs. Teen Titans includes Rosario Dawson as Wonder Woman/Diana Prince, Jerry O’Connell as Superman/Clark Kent, Christopher Gorham as The Flash/Barry Allen, Jason O’Mara as Batman/Bruce Wayne, and Shemar Moore as Cyborg/Victor Stone. They all do a reasonable job with what isn’t exactly Shakespearean dialogue, but in the context of superhero/comic book action works for what it is. Rosario Dawson is the standout of the veteran actors, but Taissa Farmiga does a good job as well as the somewhat emotionless sounding Raven.

As for the production, the action is good and the animation is styled as one would expect, although it is never quite as eye-catching as some of the best graphic novels and comic books out there.

The AVC 1080p encodement of the digital animation for Justice League Vs. Teen Titans looks good, but it is not perfect. It does suffer from some fairly obvious color banding, which is disappointing. Apart from that, it looks well saturated and detailed and there is little other noise or anomalies such as motion artifacts to distract from the animation.

An English DTS-HD Master Audio 5.1 mix is offered up for Justice League Vs. Teen Titans that puts heavy

emphasis on the low-end frequencies, so expect a lot of “boom” during the nearly non-stop action sequences. This is an aggressive mix, but it doesn’t let the dialogue get swallowed up and the high frequencies are also not fatiguing.

Fans of Justice League and Teen Titans or DC Comics in general should enjoy this direct-to-video DC Universe Original Movie. The production values are good as is the cast. The story could use just a little tweaking and maybe a little lengthening, but, hey, this is after all more about the action than character development and on that it certainly delivers.