Replicas is a 2018 indie sci-fi/thriller from director Jeffrey Nachmanoff starring Keanu Reeves (The Matrix). Reeves plays a neuroscientist, Will Foster, who has plodded away at getting human consciousness from just dead soldiers transferred into an advanced computerized brain that resides in an equally advanced android. When Foster loses his wife Mona (Alice Eve, Star Trek: Into Darkness) and three children in a terrible car crash, he races against time to bring them back to life, cloning their bodies in his lab and transferring their saved consciousnesses into the cloned bodies. This puts him at odds with his company and their leading henchman, Jones (John Ortiz). Foster quickly finds out that the company he has worked for is far more than just a research company – and they are dangerous.

Director Jeffrey Nachmanoff has spent his career working mostly working as a director and producer of TV movies and writing the odd episode for TV series. That background definitely shows in this feature film. Replicas never rises above the level of made-for-tv fodder, with a screenplay that jumps from one plot twist to the next so quickly it is difficult to keep up with where this film is going. It may have been easy to swallow this whole exercise as an examination of the meaning of life if the story stuck to the idea of transferring human consciousness into a machine, but it went off onto this tangent with clones, and androids, and clandestine organizations, and other ridiculous twists I’ll just keep from spoiling.

If Replicas gets anything right, it’s the visual style. The film looks good despite being a small budget production. The android reminds me of the robot from the Will Smith movie I, Robot. The scenery and set designs all look slick and modern, and Nachmanoff knows how to play with light and shadow to create that sci-fi atmosphere. Keanu Reeves also feels right at home in this sort of material, albeit this is certainly not on the level of The Matrix – it’s not even on the level of Johnny Mnemonic. 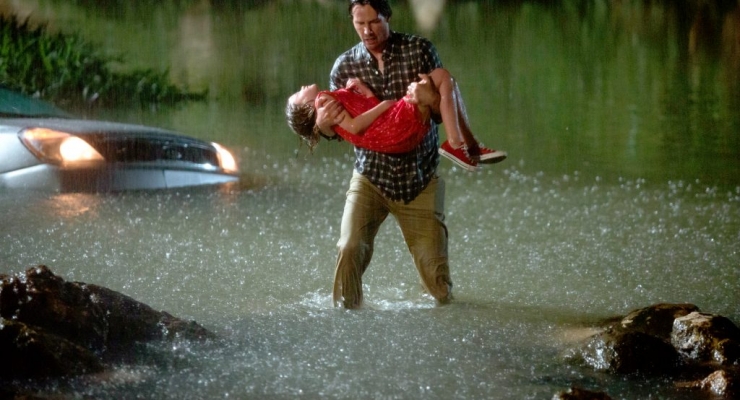 Replicas comes to Blu-ray in an AVC 1080p encodement framed at 2.40:1. This is a good-looking film with high production values for an indie sci-fi/thriller. The contrast is strong, black levels and white balance are good and flesh tones look natural. Overall, the film presents cleanly with lots of detail on disc. Digitally, this film is available in 4K Ultra HD with Dolby Vision or HDR10. While this Blu-ray version doesn’t have the same sort of three-dimensionality and ‘pop’ as that version does, it still looks good.

Replicas arrives with a DTS-HD Master Audio 5.1 mix on Blu-ray. It’s a well-balanced mix with good dynamics and clean dialogue. There’s good atmospherics and the pulsating score is well placed throughout the soundfield. Low-end is not too extended, but it’s weighty enough for this sort of thriller.

The included ‘making of’ is interesting, but nothing here is really unmissable.

Replicas is a great looking but ultimately confusing and forgettable sci-fi romp that misuses its big-named cast. I’m not so sure this one is necessary as a purchase. Rent the disc or rent it digitally on a slow day.

Replicas is out on Blu-ray Combo Pack April 16, 2019 from Lionsgate Home Entertainment