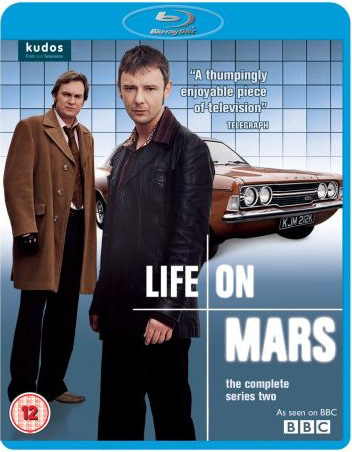 Everyone’s favorite DI lost in time is back for a second and final series in Life on Mars: The Complete Series Two. Detective Sam Tyler  (John Simm) is once again trying to get back to what he believes is his real life in 2006 whilst solving crimes on the Manchester constabulary in 1973.

Series Two retains all the early-70’s authenticity of its Series One predecessor, and fans of the series are presented with more questions of Sam’s predicament as he stumbles through 1973. Of course, with this being the final series, all of the questions are finally answered — maybe.

But, Life on Mars, as before, was from the beginning far more than just an exploration of DI Tyler’s psyche, so the crime is ratcheted up a notch. One welcome change from Series One is the promotion of Sam’s confidant and love-interest, Annie Cartwright (Liz White) from WPC (the now obsolete term Woman Police Constable) to a WDC (the also obsolete Woman Detective Constable). The promotion of the character allows for far more screen time between the two, who have a great chemistry together, and it also helps to soften the edgy crime drama a bit.

Still, the series’ true standout performer is DCI (Detective Chief Inspector) Gene Hunt (Philip Glenister) whose gruff exterior and loose interpretation of the rules is a great juxtaposition to Sam Tyler’s strict, near do-gooder approach. Glenister’s casting in the role as Hunt was a brilliant maneuver by the producers, as he owns Gene Hunt in every way, from his mannerisms right down to the permanent scowl on his face.

As is the case with most British series, Life on Mars: The Complete Series Two is a short run; only 8, hour-long episodes. My advice is to pick this up along with Series One and make a weekend of it — you will not be disappointed.

Life on Mars: The Complete Series Two comes to Blu-ray in an AVC/MPEG-4 encoding at 1080p/24 of its original 1.78:1 broadcast aspect ratio that averages ~17Mbps.  Like The Complete Series One, The Complete Series Two was also originally filmed on Kodak Super 16, 16mm film so it retains the same gritty look. There are still issues with noticeable motion jaggies, and the 16mm source makes for a lack of background detail extension and some overall softness. The transfer’s strengths are strong black levels with no black crush and natural flesh tones displaying no red push. There are also no compression artifacts present in the encoding, such as macroblocking and posterization.

Life on Mars Series Two on Blu-ray is provided with English Dolby TrueHD 5.1 and English Dolby 2.0 mixes. The TrueHD 5.1 mix for Series Two is even more front-heavy than Series One, with the surrounds used for ambience and atmospheric effects. There is very subtle discrete use of the surround channels for sound effects and the soundstage opens up with the series’ 1970’s rock and roll soundtrack. Dialogue is clear, with no noticeable clipping, but is limited to the center channel.  There is some occasional directional panning of sounds across the front to follow the action on screen.

The Series Two Blu-ray release of Life on Mars loses the audio commentaries that were present for each episode for the Series One release, but replaces them with several behind-the-scenes featurettes instead.

Series Two wraps up this brief yet strong BBC series in a satisfying way and clears the way for the BBC’s follow-up series Ashes to Ashes. This Blu-ray release will probably not qualify as reference material due to its 16mm source and slight issues with motion jaggies, but it is free from compression artifacts and is still going to be superior to any DVD or broadcast version available.