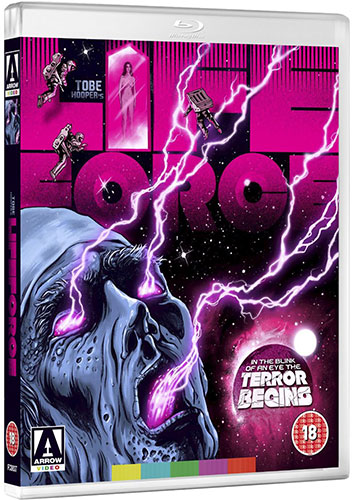 Tobe Hooper’s (The Texas Chainsaw Massacre) follow-up to his horror hit Poltergeist was this absurd sci-fi/horror misfire, Lifeforce. An adaptation of Colin Wilson’s novel The Space Vampires, Hooper’s film never seems to find its footing, and instead plays like a straight-faced homage to the best of the worst of British horror from Hammer, such as Quatermass and the Pit, or BBC sci-fi stalwarts like Doctor Who. One might even look at Lifeforce and see the influence of Kubrick’s 2001: A Space Odyssey trying to peek through, but that’s just another of the issues with Hooper’s film. It takes itself way too seriously, never realizing that it is on its face, dealing in the absurd.

The story is of a joint British-American space mission to probe Hailey’s Comet. Upon its arrival there, the crew, headed by Carlsen (Steve Railsback), unexpectedly find an alien spaceship. When they investigate, they find aboard the ship dead, desiccated bodies of bat-like creatures, and a group of naked humanoids in suspended animation within some sort of crystalline containers. When they take the humanoids back to their ship, they somehow escape, and the crew is infected with some form of contagion. Returning back to Earth, the ship is recovered, and the commanders recover the beautiful, and naked “space vampire” (Mathilda May), who, after attacking members of the British space agency, ends up loose in London, body hopping from one person to another, whilst still plaguing the still alive Carlsen with erotic, telepathic dreams. Soon, the city is being overtaken by these zombie-like creatures and the beautiful vampire that men seem irresistibly drawn to must be stopped.

If there is one thing you can give Tobe Hooper credit for with Lifeforce, it’s his ability to do a mashup of sci-fi, horror, and doomsday flick and somehow keep a straight face through it all – well, at least the actors do. Right down to the serious, and admittedly fantastic, score from Henry Mancini, this film is just begging viewers to take it as high art, even as Mathilda May walks around in nearly every scene stark naked and desiccated copses writhe around in agony strapped down to gurneys. Viewers, on the other hand, will have no problems breaking out a smile and laughing at the absurdity of it all as they toss some popcorn into their mouths and guzzle down their beverage of choice.

Lifeforce was transferred from original elements by MGM under the supervision of director Tobe Hooper and it arrives on Blu-ray from Arrow in a satisfying AVC/MPEG-4 1080p encodement. It looks film-like and provides lots of texture and natural film grain that only occasionally tips ever so slightly into noise. While overall the image looks clean, there can still be some speckles and small scratches spotted throughout the presentation. That being said, colors look superb, especially that opening space sequence with all those greens and blues, and the black backdrop of space looks absolutely inky. Flesh tones are natural and overall contrast is pretty good.

We have an English DTS-HD Master Audio 5.1 (48kHz/24-bit) mix and an English LPCM 2.0 (48kHz/24-bit) stereo mix included by Arrow. The latter might most closely resemble the 70-mm 6-track version of the soundtrack, with more discrete sound effects like radio communication coming from the surround sides and behind, or helicopters and space shuttle thundering overhead. There’s also heavy, massive doses of low end in the 5.1 mix and lush ambience. Unfortunately it also has lots of audible crackle that is distracting. Henry Mancini’s magnificent score as performed by the London Symphony Orchestra sounds superb, however. It’s powerful, dynamic, and natural. The 2.0 PCM offers a more balanced sounding mix with less boom and gimmickry, but the crackle is still there.

This 2-disc Blu-ray set is overflowing with bonus features and includes both the original UK theatrical release and the longer international release of the film. All extras are included on disc one. Additionally, a Limited Edition Steelbook version is also available.

Lifeforce is prime late night viewing and cult material, just the sort of absurdity that Arrow specializes in releasing. I’m not sure what’s sillier, how serious this film takes itself, or the idea of space vampires in the first place. Either way, fans of this sort of entertainment will be pleased with the presentation on Blu-ray, which is a fine bit of eye candy in every meaning of the phrase (and yes, I am including Mathilda May in that calculation).