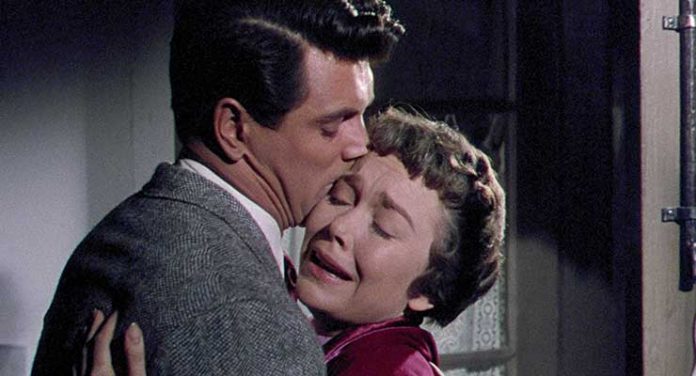 Magnificent Obsession is Douglas Sirk’s 1954 remake of the 1935 film of the same name. In the hands of Sirk, the story takes on a completely different tone – that is to say, it is drenched in high melodrama that stretches believability, but the film is saved by the high quality of Sirk’s direction and attention to detail.

Rock Hudson plays Bob Merrick, a rich playboy who is indirectly responsible for the death much-beloved local doctor when he wrecks his speedboat and the town’s only resuscitator machine must be redirected to revive him instead of going to the doctor who is having a heart attack at the same time. The doctor’s wife, Helen Phillips (Jane Wyman), won’t accept Merrick’s apologies, and it weighs on his conscience. Later on, Merrick is indirectly responsible for an accident that causes Helen to lose her eyesight. Unwilling to give up on winning her forgiveness, Merrick inveigles his way into Helen’s life to help her anonymously as she adjusts to a sightless life. But Merrick who was also once a medical doctor goes back to medical school to quickly study and learn how he can help Helen regain her sight, finally convincing her to undergo surgery in which her sight will be restored. In the meantime, Helen has fallen in love with him and he her, without her ever knowing he was the one indirectly involved in her husband’s death.

The plot holes, confused narrative, and campy acting in Magnificent Obsession is all smoothed over by Sirk’s overwhelmingly glamorous and sentimental direction and the A-list leads Rock Hudson and Jane Wyman, despite their underwhelming performances and icy cold chemistry. The film was one of the most successful of Universal’s big budget productions and even though its syrupy melodrama is completely out of touch with today, its technique and overall production values make it a pleasurable experience for fans of classic romance films of this era. 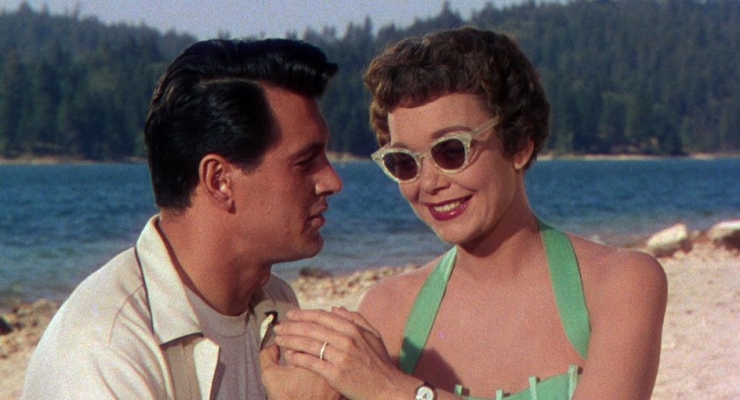 The high definition transfer of Magnificent Obsession (1954) was created from a 35mm interpositive. Thousands of instances of dirt, debris, and scratches were removed using MTT’s DRS, while Digital Vision’s Phoenix for jitter and chroma breathing. The film is presented on Blu-ray in its original aspect ratio of 2.00:1 in an AVC 1080p encodement. We get a presentation that is generally clean and has good detail but does have film softness and a grain structure that is in line with what one would expect from a transfer sourced from a 35mm interpositive. Even if the grain structure isn’t as fine as it would be if it were taken from the original camera negative, there is still a lot of detail in the image and the colors are also quite vibrant.

The original monaural soundtrack for Magnificent Obsession was remastered from the 35mm DME magnetic track using Pro Tools HD and iZotope RX. The monaural mix is included on Blu-ray as LPCM 1.0 and sounds fairly good given its age and the recording techniques of the time. Dialogue is clear and there is very little noise or distortion.

The collection of supplements from Criterion Collection in this set are wonderfully informative and the audio commentary goes into a lot of the history of the film.

Criterion Collection does an excellent job bringing this romantic classic and the 1935 original to Blu-ray. Neither film is a great story, but on the whole the 1954 film is able to overcome its flawed screenplay and original source with its production values and spectacular cinematography. The included 1935 original has also been wonderfully restored, but is an inferior film in every way.

Magnificent Obsession is out on Blu-ray & DVD August 20, 2019 from Criterion Collection

3.9 / 5 TheaterByte Rating
{{ reviewsOverall }} / 5 User Rating (0 votes)
Universal International Pictures (UI) | The Criterion CollectionStudios & Distributors
Douglas SirkDirector
Lloyd C. Douglas (novel) | Robert Blees (screenplay) | Wells Root (adaptation) | Sarah Y. Mason (based upon the screenplay by) | Victor Heerman (based upon the screenplay by)Writer
108 Mins.Run Time
$27.99MSRP
20 August 2019Release Date
2.00:1Aspect Ratio
AVC 1080pVideo
English LPCM 1.0 MonoAudio
English SDHSubtitles
The Creative Content
The Video
The Audio
The Supplements
Summary
A rich playboy (Rock Hudson) indirectly responsible for the death of a woman's husband (Jane Wyman) and an accident that causes her blindness sets out to anonymously help her and win her affection in this lavish and sentimental melodrama from director Douglas Sirk, a remake of the original 1935 film of the same name. The Criterion Collection restoration on Blu-ray is a solid offering that brings the film to life with good details, vibrant colors, and an informative selection of bonus features.
What people say... Login to rate
Order by: