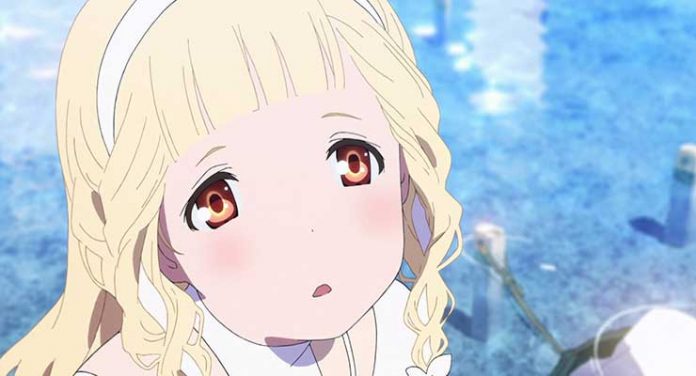 The story is set in a land called Iolph where the people are elf-like creatures who are nearly immortal, their aging process halting somewhere in their mid-teens. A girl named Maquia has grown listless with the seemingly idyllic existence of the Iolph, doing not much more than weaving Hibiol, an intricate cloth that also acts as as a historical chronicle of the Iolph people. There is a ban by the elders on Iolph’s leaving the realm, yet Maquia longs to see the outside world. One day a rival kingdom, the Mesarte, invade the Iolph, seeking their blood to gain the secret to their immortality. Maquia flees and along the way finds a mortal infant boy in his dead mother’s arms. The 15-year-old immortal Maquia decides to raise the mortal infant on her own, naming him Ariel, and the story follows the relationship and bond that grows between the two as Ariel ages and Maquia doesn’t.

Maquia: When the Promised Flower Blooms starts out seeming like it will be no more than a glorified lengthy fantasy anime series episode, but by a quarter of the way in, one realizes this is much more special. While the story surely pulls from many familiar genre tropes such as dragons, the elvish Iolph race themselves, and even armored “knights,” it distinguishes itself in its character development.

The story of familial bonds, family as what we make of it, the ties between the young Maquia and her adopted son Ariel, is what makes this film a true winner. Then the fantastic animation and character designs bring it all home. We are rewarded with a lavish world of moe characters, intricate backgrounds and dazzling visual effects that are handled with great subtlety.

By the time we reach the film’s final act, we are so heavily invested in the characters and how things turn out, I defy anyone watching not to shed a tear or two. 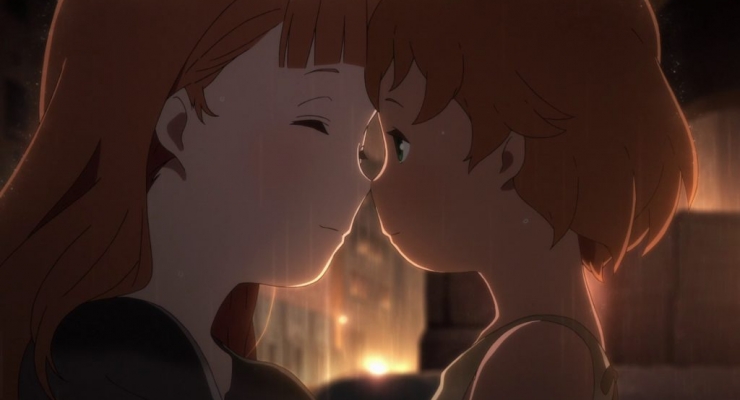 Maquia looks gorgeous in this 1.78:1 AVC 1080p encodement on Blu-ray from Shout! Factory. The digital animation is beautifully rendered with crisp details, wonderful colors and not a hint of color banding, noise, or aliasing.

Maquia arrives on Blu-ray with the original Japanese-language audio mix and an English dub both in DTS-HD Master Audio 5.1. It’s impossible to switch between the Japanese and English track without the film starting over from the beginning, so I settled on the Japanese as my reference. It is wonderfully balanced with lush atmospherics and some solid discrete sounds panned through the surrounds. The low frequencies are beefy but not boomy.

The special features on Maquia aren’t abundant but the included making-of makes for an interesting watch.

A tear-jerking epic fantasy that dazzles with its imagery and creates characters we want to follow along with. Maquia: When the Promised Flower Blooms is an instant classic – and it happens to look and sound fantastic in this Blu-ray Combo release from Shout! as well.

Maquia: When the Promised Flower Blooms is out on Blu-ray Combo & DVD February 5, 2019 from Shout! Factory

3.8 / 5 TheaterByte Rating
{{ reviewsOverall }} / 5 User Rating (0 votes)
Eleven Arts Animation StudioAnimation Studio
Shout! FactoryDistributor
Okada MariWriter
115 Mins.Run Time
5 Feb. 2019Release Date
$26.99MSRP
1.78:1Aspect Ratio
AVC 1080pVideo
Japanese DTS-HD MA 5.1Audio
English DTS-HD MA 5.1Secondary Audio
English | English SDHSubtitles
The Story
The Animation
The Video
The Audio
The Dub
The Supplements
Summary
This heartfelt and visually stunning fantasy epic charts the story of the bond that forms between an immortal girl and the mortal infant she rescues from a dead mother's arms as she raises him and he ages while she does not. Maquia: When the Promised Flower Blooms is an instant classic.
What people say... Login to rate
Order by: