Master Z: Ip Man Legacy is a spin-off film in the Ip Man franchise from director Yuen Woo-Ping, who was responsible for the martial arts action sequences in films such as The Matrix and Kill Bill. This story picks up after the events of Ip Man 3, following Cheung Tin-chi’s (Zhang Jin) defeat to Ip Man. After his defeat, Tin-chi leaves with his son and tries to settle down to a quiet life away from martial arts as a grocer in Hong Kong, but he soon runs afoul of a local gangster, Tso Sai Kit (Kevin Cheng) and finds himself burned out of his home. Taken in by a beautiful and kind woman (Liu Yan) whose brother runs a popular bar in the local foreigner entertainment district, Tin-Chi goes to work for her brother at the bar, but is only drawn deeper into the world of the triads, corrupt police, and foreign businessmen involved in the illegal opium trade.

Master Z: Ip Man Legacy provides a gut punch of martial arts with a story that stays true to the core of Ip Man franchise while delving into some of the socio-economic issues of Hong Kong’s past. Yuen’s lens superbly captures the Hong Kong of old as well, rebuilding the classic style of the now famous neon signs and side streets that still evoke the city state. Where he really excels, however, is his inventive capturing of the martial arts sequences that will get your adrenalin flowing.

Michelle Yeoh, who plays Tso Ngan Kwan, head of the major triad, eases into a role that exploits her abilities in such a film, reminding one of her role in Crouching Tiger, Hidden Dragon, and she also manages to command every scene she appears in. Tony Jaa, who doesn’t utter a word in the entire film, is also a great presence and shows off his renowned martial arts skills flawlessly.

Dave Bautista also appears as a ruthless foreigner seeking to make his fortune in Hong Kong in the drugs trade. 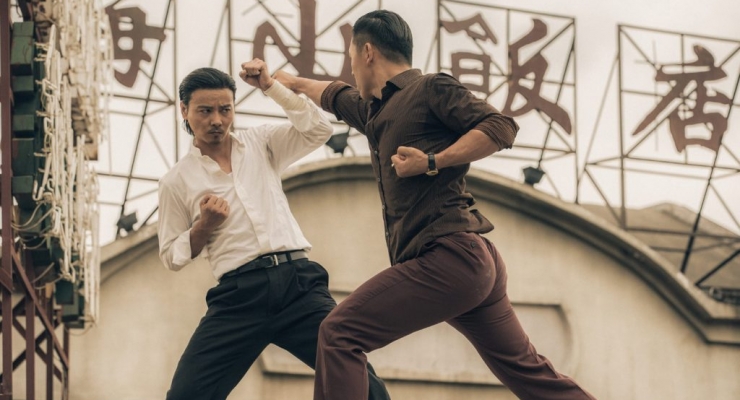 The film was shot on the Arri Alexa Mini with Cooke Anamorphic/i lenses in Apple ProRes 4444 XQ at 2.8K resolution and a 2K DI was used in post-processing. The film arrives on Blu-ray in an AVC 1080p encodement framed at 2.35:1. The image looks very detailed with good color vibrancy and contrast, extended shadow nuance, but some slight color banding in solid backgrounds, skies, and very dark shadows.

Well Go USA provides the original Cantonese audio for Master Z: Ip Man Legacy in a Dolby Atmos mix. Unless I’m mistaken, this is the first Atmos mix from Well Go as their previous releases with immersive mixes have been DTS:X. That said, this isn’t the best immersive mix I have heard from them on Blu-ray, but it is good. It makes use of the height/overhead channels for mostly atmospherics such as chatter in the bar or on the streets and the swell of strings and pulse of percussion in the score. Dialogue and even most solid sound effects seem to be mostly spread across the front although some do occasionally spread out to the sides, like a ringing bell for example. There’s also lots of low end beefing up the score and the multitude of blows landing during the fight sequences.

The special features included aren’t in an overabundance, but they are interesting if a bit in the ‘promotional’ EPK category.

This is a solid excursion in this franchise. The martial arts sequences will leave you punch drunk with their inventiveness and at the center of the action is a story with characters you want to root for and a lot of heart. The Blu-ray has a satisfying picture and Atmos mix as well.

3.5 / 5 TheaterByte Rating
{{ reviewsOverall }} / 5 User Rating (0 votes)
Mandarin Motion Pictures | Well Go USA EntertainmentStudios & Distributors
Yuen Woo-PingDirector
Edmond Wong (screenplay by) | Chan Tai-lee (screenplay by)Writer
108 Mins.Run Time
$29.98MSRP
23 July 2019Release Date
2.35:1Aspect Ratio
AVC 1080pVideo
Cantonese Dolby Atmos (Compatible w/ Dolby TrueHD 7.1)Audio
English | Chinese | FrenchSubtitles
Mandarin DD 5.1 | English DTS-HD MA 5.1 | French DD 5.1Secondary Audio
The Creative Content
The Video
The Audio
The Supplements
Summary
Following the events of Ip Man 3, this spin-off film follows Cheung Tin Chi (Zhang Jin) who is trying to live a quiet life as a grocer in Hong Kong with his young son after being defeated by Ip Man, but he finds himself in trouble with the triads and an unscrupulous foreigner after intervening in a fight. The film, directed by Yuen Woo-Ping, the director behind the choreography for The Matrix and Kill Bill films, packs a gut-punch with its fight sequences and is anchored by a compelling visual style and lots of heart. The Blu-ray looks satisfying and offers a pretty good Atmos mix of the original Cantonese.
What people say... Login to rate
Order by: