The second season of this British historical drama picks up three years from where it left off. It is now 1935 and our characters have grown and now India is well on its way to what we know will be its final independence from Great Britain. There are already violent stirrings, bombings, rebel attacks, and unrest between Muslims and Hindus. Gandhi is making his appearances and calling not only for an independent India, but also for peace amongst its peoples. It is summer again in Simla and Ralph Whelan (Henry Lloyd-Hughes) is still doing whatever he can to become the next Viceroy, even if it means pimping out his wife to the maharaja (Art Malik, Jewel in the Crown). Award-Winning actress Julie Walters (Billy Elliot, Educating Rita) reprises her role as the scheming Cynthia, mother figure to Whelan who will also stop at nothing to make sure he gets the Viceroy position. Meanwhile, Aafrin (Nikesh Patel) has returned from Bengal where he got himself mixed up with dangerous revolutionaries and his loyalties to the Whelan family are tested, especially as his feelings for Ralph’s sister Alice (Jemima West) reassert themselves. Alice, meanwhile, is trapped with her abusive husband who has found her and come to India to torment her and turn her young son against her.

The second season of the series has a bit of a quicker pace than the first and a little more action because things are beginning to heat up. The atmosphere surrounding independence is becoming more intense; there are rebel attacks, bombings, riots, and all sorts of machinations. At its core, however, the series remains more of a lavish melodrama than anything else. The trouble with Alice and her abusive husband and the star-crossed, forbidden love between Aafrin and Alice seems to motivate the plot. Even Aafrin’s sister Sooni seems to find love coming at her from different angles, be it an arranged marriage she doesn’t want, an unexpected proposal from a dear friend, or unexpected love with a Muslim man, which upsets her parents.

The drama may be too syrupy at times, and, given the weight of the surrounding events, it can also seem a little plastic, but there’s something addictive and delicious that keeps one coming back to Indian Summers, whether it is the incredible acting from the powerful cast, the beautiful sets and landscapes of Penang, Malaysia standing in for Colonial India, or the remarkable character developments from the writers. 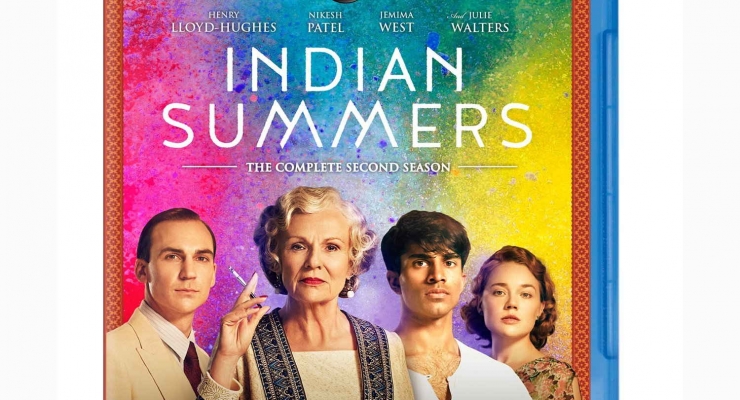 Shot digitally on the Red Epic, Indian Summers has a rich and colorful palette that is presented beautifully in this AVC 1080p encodement on Blu-ray from PBS. The textures are crisp, there is no compression noise, and there is a subtle amount of video “noise” that acts almost like an organic layer of grain. Contrast is strong, and the shadows do not show any crush.

The standard English DTS-HD Master Audio 2.0 stereo track is included. While it would have been better to hear the ambience of the Indian countryside and the bustle of the city in 5.1, this track does well presenting its sound effects and dialogue with good stereo imagery intelligible speech.

A just-over 45-minute “making of” is included wherein the cast and crew discuss where the series goes in its second season while some clips from the series are interspersed with their interviews.

Indian Summers sways along like a warm tropical breeze before the monsoons. It’s a stormy delight of passions, intrigues, and romance set in the days before Indian independence and it percolates and simmers, even if at times it misses some of the deeper issues while focusing too much on the superficial. The second season does better at folding in some of the wider points of the era and quickening the pace, while also maintaining the gorgeous production and core of the series.