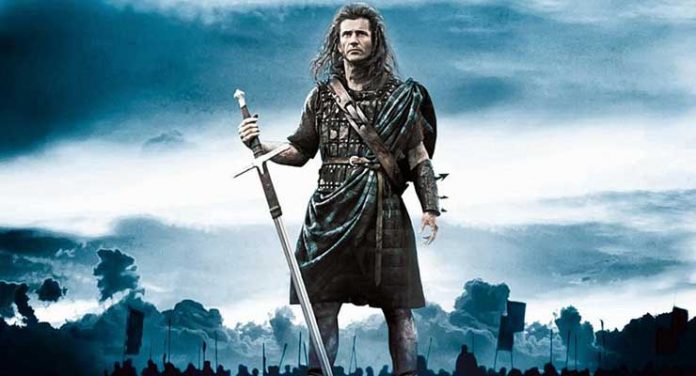 Braveheart is the 1995 Mel Gibson-directed historical biopic about the heroic 14th century Scotsman William Wallace (played by Gibson) who rallied his country on to rebellion and independence from the English after the oppressive occupying forces of the English king killed his wife after they try to rape her.

This epic film, although not always historically accurate – Princess Isabelle (Sophie Marceau) is depicted as a very sexy adult when in fact she would have been only 10 years old at the time of her marriage to Prince Edward (Peter Hanly) – it is magnificently staged and shot by cinematographer John Toll who helps Gibson not only capture the brutality and chaos of the medieval battlefields, but also the grandeur  of Scotland itself.

As performances go, Gibson does his best but it’s not his best screen performance by a longshot. He’s outdone by Sophie Marceau’s sultry and conniving Princess Isabelle and veteran Patrick McGoohan’s devilish Edward I AKA Longshanks.

Braveheart was originally shot on the Panavision Panaflex Platinum camera with Panavision C- and E-Series lenses in the anamorphic format on 35mm Eastman EXR 100T 5248, EXR 200T 5293, and EXR 500T 5298 film stock. It arrives on 4K Ultra HD in a HEVC 2160p (4K) encodement with Dolby Vision HDR. By any definition, this is a beautiful 4K transfer that looks filmic and organic. The Dolby Vision results in amazing shadow detail and nuance in the dark scenes as well as lovely ‘pop’ in highlights like fires or the reflection of moonlight on a sword, for instance. Colors also benefit with the WCG (Wide Color Gamut) providing an array of colors that don’t appear or don’t look quite the same or as vibrant on the Blu-ray version.

Braveheart on 4K Ultra HD gets an awesome Dolby Atmos immersive audio mix that makes good use of the height channels for atmospherics and discrete effects during the numerous battle sequences, has solid effects in the surround channels, weighty low end and clean dialogue. The excellent score is also balanced superbly into the mix and benefits from the additional height channels.

The special features are all compelling additions, but nothing included has not been previously released.

A ‘90s classic and one of the better films from Mel Gibson’s career before he took a decidedly downward, scandal-ridden turn, Braveheart is epic, passionate, and epic. The new 4K Ultra HD Blu-ray from Paramount is a breathtaking transfer with a fantastic new immersive audio mix.

Braveheart is out on 4K Ultra HD Combo Pack May 15, 2018 from Paramount